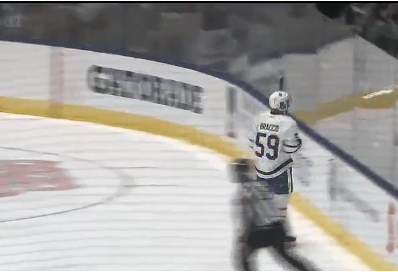 By Ryan Hobart
5 years ago
Comments
The first game of this year’s rookie tournament got underway at the MasterCard Center in Toronto. The Leafs ran the following lines.

A rough start for the Leafs who looked very messy through the first 8 minutes of the period. It culminated with the Canadiens taking advantage of a bad zone exit attempt to take a 1-0 lead:

The knock on Liljegren has been his defensive side of the game…which is going to need some improvement moving forward. pic.twitter.com/qK677iCZMa

A cross checking penalty goes to Josh Winquist near the end of the period, but the baby Habs are unable to capitalize.
The period ends with the Canadiens leading the Maple Leafs 1-0.

The Leafs and Habs start this period 4-on-4 after Pospisil got in a shoving match at the end of the first, but nothing interesting comes of it. Later, Pospisil takes another penalty but again, the Canadiens are unable to capitalize on the advantage.
Advertisement
Ad
Advertisement
Ad
Midway through the 2nd, Middleton drops the gloves again Pezzetta, and Middleton leaves the game afterwards with some kind of minor injury.
With 8ish minutes to go, the Leafs make a planned swap between Kaskisuo and Ian Scott to get the 2017 draft pick some action. Kaskisuo looked really strong in the time he played, making some exciting saves.
In Scott’s first real test, he denies a 2-on-1 opportunity for the Habs with a great move cross-crease.
Montreal goaltender McNiven had been playing incredibly, but Martins Dzierkals takes a hard shot off of a faceoff and beats him to tie the game:

Dzierkals has been flying in this game and snipes one here. pic.twitter.com/O3CEzNEcDK

Shortly afterwards, the Leafs get a powerplay and immediately score on a point shot by Bracco tipped home by Grundstrom:

Bracco fires from the point on the PP, looks like Grundstrom tips it on the way in. pic.twitter.com/GE11MHvqPX

The 3rd period started flying at a high pace, and after the Leafs had a couple chances, the Habs break out on a stretch pass that beats Liljegren and Mattinen, leaving Will Bitten on a breakaway which he finishes:

Liljegren with the shot at one end, but gets beat at the other end for a goal (in all fairness, his partner didn't give him much help) pic.twitter.com/OakqV33ySj

Not too long after, the Canadiens beat Scott again, this time on a 2-on-1 where they take the shot instead of the pass:

Another 2-on-1, another goal. 3-2 Montreal. pic.twitter.com/KN8g5LymeL

Midway through the 3rd the Habs leading 3-2. The Leafs having some trouble getting pressure, and the Habs capitalize again, this time on giveaway by Liljegren right to Ebbing in front to make it 4-2:

Not long after, the Leafs take a penalty and the Habs finally make use of the powerplay advantage with a great shot by Audette:

I'm not even mad, that was an amazing goal. 5-2 Habs. pic.twitter.com/8l5Wi5pEcW

Overall this was not a good game for this team, but there were some minor bright spots to mention. The Leafs are known to be deep in the prospect pool with skilled wingers, and those were the only ones who showed up tonight. Bracco, Grundstrom, and Dzierkals all looked good when they got offensive opportunities. But the team around them was entirely incapable of generating sustained offensive pressure to generate those offensive opportunities. Given that there were a lot of warm-body non-prospects around the lineup, this isn’t exactly surprising.
My 3 stars of the night all go to the Habs prospects:
Tune in Sunday at 4pm when the baby Leafs take on the baby Sens.
A huge thank you to Sean Tierney (@ChartingHockey) and our own Ian Tulloch (@regressIan) for the gifs.
Advertisement
Ad
Advertisement
Ad