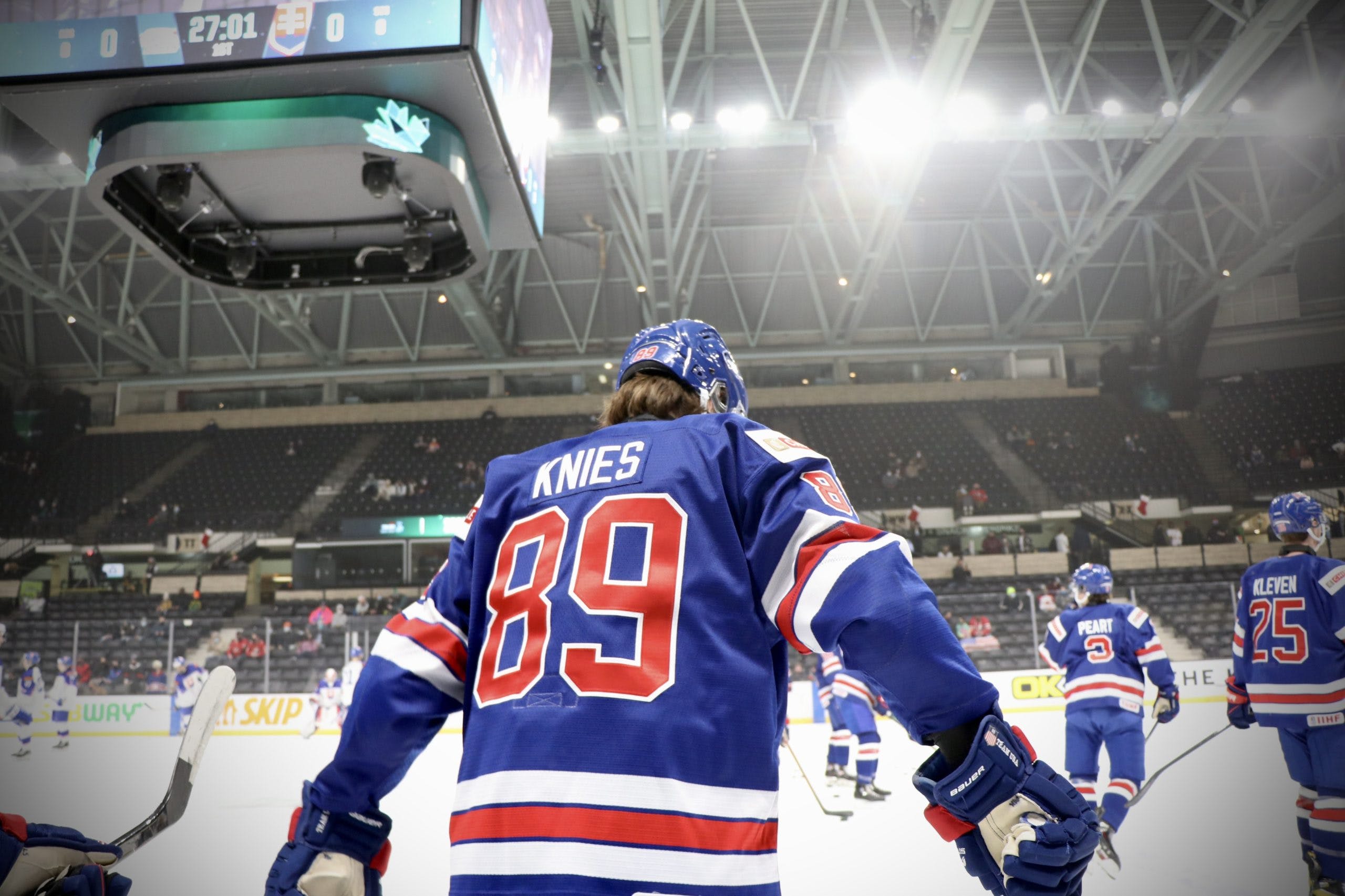 Photo credit: twitter.com/usahockey
By Jon Steitzer
1 year ago
Comments
You know what’s better than the Olympics becoming the Spengler Cup? The Olympics becoming the World Juniors. While what we appear to be getting is a mashup of the two, and not the ideal NHL representation, it’s exciting news today for Leafs fans as Matthew Knies appears to have been selected by Team USA:

NEWS: Reporting with @chrismpeters, team and league sources tell @DailyFaceoff these 15 players have been invited to play for Team USA 🇺🇸 at #Beijing2022 Olympics.

List is still fluid, not all have confirmed participation, and @USAHockey is actively adding others. ⬇️ pic.twitter.com/jAdBFDawZO

(Yes, those are former Leafs/Marlies Kenny Agostino, and David Warsofsky there as well)
The selection of Knies definitely speaks to USA Hockey embracing the opportunity to go youthful at this Olympics. Knies, along with Beniers, Faber, Helleson, Sanderson, and others speaks to a youth movement that particularly tapped into the University of Minnesota, with three players representing them.
Knies, a 6’3 19 year old forward, has had 16 points in 18 games as a Freshman at the University of Minnesota, scoring 7 goals.
In his winter prospect rankings article Kyle Cushman had this to say about Knies:

Knies has seven goals and 16 points this season, breaking through as a top-six player for Minnesota immediately. He ranks second on the team in goals and third in points, but it’s been the other aspects of his game that have really stood out to me. Knies’ physicality on the forecheck, ability to create space for himself and teammates with his skating and deking, and underrated shot have all been elements that have impressed me this year.
He jumps up above the three prospects to follow in part to his production, but also due to his NHL projectability. Listed at 6-foot-3 and 205 pounds, it’s easy to see a scenario where Knies plays regular minutes in the NHL in a variety of roles. While he could be an excellent complementary top-six winger with his strong forechecking and shot, he could also be an effective bottom-six piece who plays an energy role and chips in some offence if he doesn’t reach his ceiling.

Knies is an exciting addition, but in the spirit of exploring that list you can see that his teammate, Ben Meyers, is an undrafted free agent. Meyers is a point per game 23 year old, who plays center and the wing. It will be interesting to see what he can do as well at the Olympics as I’m sure there is going to be some interest from around the NHL in getting him signed.
Advertisement
Ad
Advertisement
Ad
With Knies on his way, it also now seems that the possibility of Topi Niemela, Axel Rindell, and Pontus Holmberg getting chances to represent their countries are also more possible, although I suspect the youth movement might be more of a North American phenomenon for Olympic roster building due to the established leagues in Europe.
This might be the best reason to tune into hockey at 3am in February.