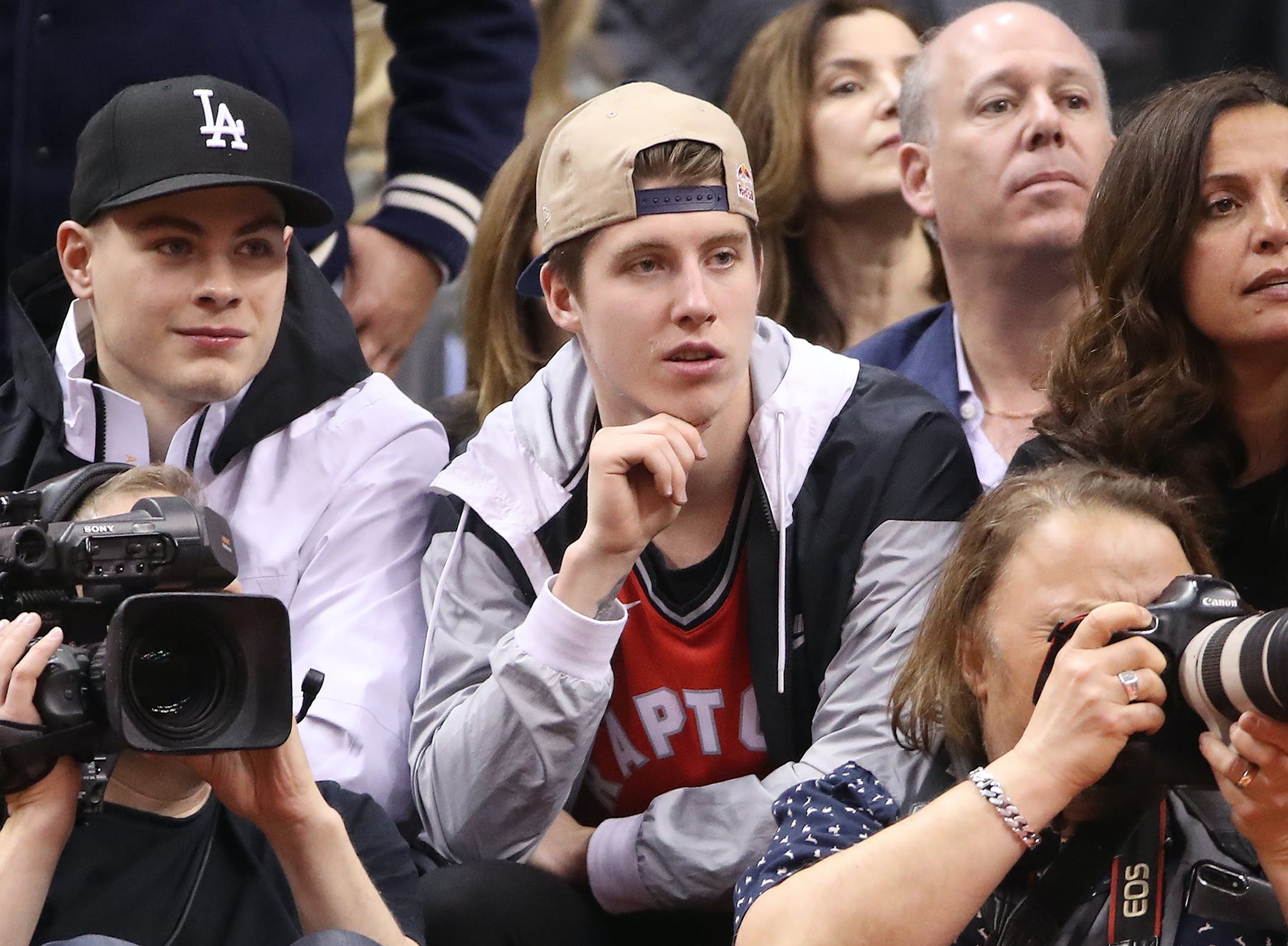 Photo credit: © Tom Szczerbowski-USA TODAY Sports
By Mike Stephens
3 years ago
Comments
On this, the first day of school, I’d like to welcome each and every one of you fine students back from what I hope was a wonderful and fulfilling summer break.
It sure wasn’t a break for me, though. I mean, yeah, nothing actually got done. But you know what they say! Money (and Twitter) never sleeps.
Anyway…
Hello! My name is Professor Darren Ferris, PhD. and welcome to the first lecture for the course “Negotiating 201: Updating the Playbook”. It’s no doubt going to be a fun semester. For those of you who have yet to take this course’s prerequisite, “Negotiating 101: An Underwhelming RFA Extension in Four Easy Steps”, all materials can be found here.
With the pleasantries out of the way, let’s get started.

Obviously, I’m sure every single person in this class today has become familiar with my trusted — nay, patented — playbook for handling an RFA client’s post-ELC contract negotiation. Yes? If not, I’ll run through it real quick:
Advertisement
Ad
Advertisement
Ad

Step One: Roughly one year ahead of time, publicly declare that your client is in “no rush” to negotiate an extension due to a “respect” of “the process”.
Step Two: Carry contract talks DEEP into the summer while simultaneously launching a Twitter campaign meant to pit your client’s fanbase against his organization  — typically achieved by feeding “scoops” to one or two trusted insiders about how they are low-balling him — all in the hopes of getting them to cave.
Step Three: When step two has inevitably failed by around late-August/early-September, feed those same trusted insiders a new batch of reports, this time on how your client may head overseas — preferably to Switzerland, it’s my favourite — for the first few weeks of the season in the absence of a contract.
Step Four: Finally, as the regular season nears its kick-off, cave and settle on an ultimately underwhelming figure.

Weaknesses Are Your Friend

Let’s use my client, @Mitch Marner, as our case study.
All summer long I’ve been following my blueprint with religious gumption to no avail. @Toronto Maple Leafs management just will not budge on Mitch. For the life of me, I cannot understand why. I’ve been reasonable! But, no, they just laughed me out of the room when I propose the whole “making our own comparable” approach that dawned on me while watching The Nanny re-runs on Nick at Nite.
Advertisement
Ad
Advertisement
Ad
I thought they’d be a smidge more receptive, at least.
So, what did I do? Well, I waited. I bided my time. And, when the unofficial media offseason reached its end and reporters returned to the airwaves, I hit ’em where it hurts.
Kawhi Leonard.
Sure, the Toronto Raptors just won their first championship in franchise history, capturing the hearts of an entire nation in the process while giving birth to a whole new generation of Canadian basketball, but isn’t it kind of tainted? I mean, Kawhi left. He’s gone. The guy received the key to the city one day and, like a week later, spurned the organization that had just moved mountains rehabilitating his career.
That’s got to hurt, right? Of course, it does! So, use it.

Dreger on TSN1050 says that after Kawhi left the Raptors, sources told him they believed MLSE would put pressure on Shanahan and the Leafs to do everything to keep Mitch Marner.

It's been previously reported that Shanahan has taken a more active role w/Marner this summer.

You’ve already exhausted each available avenue: offer sheets, the RFA interview period, European league defection, trade, everything. And what do you have to show for it? Nothing. Literally nothing. In fact, it’s actually had the opposite effect. The public has begun to turn sour on you. They’re fed up and can see right through your tactics.
Advertisement
Ad
Advertisement
Ad
Frankly, that’s okay. It happens. I anticipated this. I am very smart.
So, faced with an image crisis and a clock that is ticking faster down to training camp, how do you find new and engaging ways to court public favour? That’s right! You remind the fanbase of their most recent breakup, subliminally linking your client to the one who broke just their hearts and, in the process, planting a seed of doubt deep into the crevices of their pride.
“How’s it going to look when TWO superstars leave your city in the same summer? And one was a hometown boy? Jesus, you’ll be no better than Edmonton!”
Suddenly, all these fans will care about is saving face. Cap figures won’t matter. $11 million per? Who cares! As long as Local Boy Mitch™ can hold a pre-season press conference in which he spends an hour waxing poetic about always wanting to be a Maple Leaf and how he never, not for even ONE SINGLE SECOND, thought of leaving the good city of Toronto, these folks can stomach a fourth line made of damp dryer lint and stale oatmeal that Marner’s cap figure will handcuff them to.
Advertisement
Ad
Advertisement
Ad
Don’t stop there, though.

Strike While the Iron’s Hot

Just because you’ve successfully gained dominance over the collective psyche of an entire fanbase with your big, sexy brain doesn’t mean your work is done. On the contrary, in fact, you need to act fast. Setting up your kill shot needs to happen right away.
See, when madness hits its peak, that’s when you lay your cards on the table.

Dreger says there's been some speculation that there's been a 3 year deal on the table, with an AAV around 9.5M. Dreger thinks there's a slight chance something gets done before training camp.

“Oh, you don’t want us to leave? Great! Here are our final demands”
The fans? They won’t look at it that way, though. To them, this three-year deal will seem like you’re doing management a huge favour. I mean, you ARE sacrificing term, after all. Players love term. They can’t get enough of it. And in giving up a few years today, the perception will be that you’re putting yourself on the line to ensure that this team’s golden boy is ready when training camp opens, thereby sheltering them from the inevitable PR hit his absence would dictate.
Advertisement
Ad
Advertisement
Ad
No distractions, no speculation, just hockey.
Suckers.
Not only will you have successfully re-branded the most lucrative bridge deal in NHL history as a “huge favour”, but that three-year term — the one you so graciously conceded, by the way — will effectively march your client right to the precipice of free agency at the end of the 2021-22 season.
Why is that date special? Well, it just so happens to be the precise moment when the NHL’s U.S. TV rights deal expires.
What does a new TV deal mean? I’ll tell you, class. A new TV deal means a higher salary cap, which means a bigger payday for your client, which means a new yacht for you, my valued student.
What is your client’s team gonna do? Call your bluff? Wait you out? Yeah, okay. It’s not like their management group has a recent track record of playing hardball with RFAs whose aggressive negotiation tactics were reportedly spearheaded by a notoriously-stubborn agent and notably-involved father.
Advertisement
Ad
Advertisement
Ad
You make your own comparable, after all. Who’s laughing now?
Jeez, was that the bell? This university apparently has a bell. In any event, that’s all the time we have for today. You’ll have to wait until next week for the final step.
Oh, and a reminder: textbooks — written by me, of course — can be purchased at the campus book store for $11,635,000.