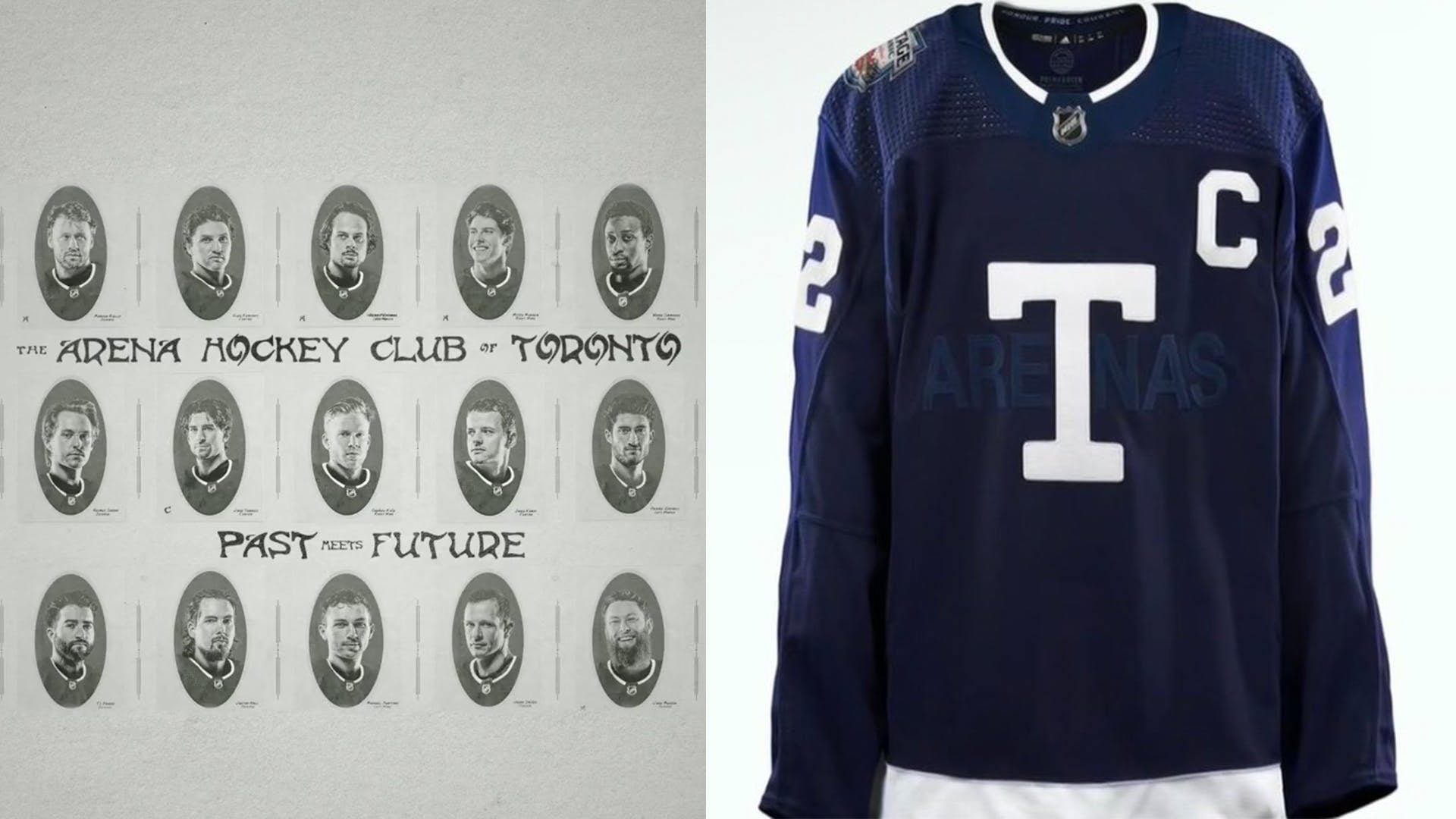 By Stephen Brown
9 months ago
Comments
The Toronto Maple Leafs unveiled their heritage classic jerseys last night during the first intermission of their game against the Pittsburgh Penguins.

It’s very similar to the uniform the Maple Leafs wore during the Next Century game against the Carolina Hurricanes in December of 2017. The only discernable differences I can see are the colour, lack of stripes on the arms, and ARENAS being the same colour as the jersey. Here is a picture of a team-issued Mitch Marner AreTnas jersey from 2017 that I own.

The swirled decorative stitching on the numbers is also the same.

Before I give my opinions on the jersey itself here is some history surrounding the Toronto Arenas. Do not crucify me if I am not spot on with my history. I am a journalism student, not a history major.
Advertisement
Ad
Advertisement
Ad

Advertisement
Ad
Advertisement
Ad
The Toronto Hockey Club was founded in 1917. They were first called the Toronto Blueshirts and belonged to the National Hockey Association, which had teams in Ontario and Quebec. In February of 1917, one of the teams, the 228th Battalion went overseas to fight in WW1. The NHA owners used this opportunity to cast a vote to downsize the league. They cited player shortages due to conscription in Canada and wanted to divide the Blueshirts’ players to restock their rosters. While this was an issue, it was mainly a play to get rid of Blueshirts owner Eddie Livingstone, who did not get along with the other owners. Livingstone filed suit against the NHA. The other owners deemed it easier to suspend the NHA and start a new one called the National Hockey League. The NHL was only ever meant to be a one-year stopgap until the NHA sorted out its legal business. The Toronto team and players came back under new ownership in the NHL. With the Arena Company owning the arena, Blueshirt players had little choice but to play for the new temporary Toronto franchise even though they had contracts with Livingstone. The intent was to settle with Livingstone, but they never did. The franchise and players were effectively being leased. Their first season of play began in December 1917, which was about a month after the battle of Passchendaele had concluded. Toronto that year was led by Hall of Famer Reg Noble upfront and backstopped by another Hall of Famer Happ Holmes. A young Jack Adams would also play eight games for the team that season. Toronto later defeated the Vancouver Millionaires to capture the first-ever Stanley Cup. At this point, the Toronto Hockey Club didn’t have an identity other than their former name. Following that season, The Arena Company returned their temporary franchise to the NHL and formed a new one called the Arenas that was free of legal action. Technically the 1918 Stanley cup does not belong to the current franchise that later became the Arenas, St Pats and then Maple Leafs. The Arenas had an awful 1918/1919 season and attendance dipped low. On top of this, several key players left due to financial problems and legal disputes, as they were still on their Blueshirts contracts. The team was sold in December 1919 and became the Toronto St Pats.

Advertisement
Ad
Advertisement
Ad
The Arenas played in Mutual Street Arena, which sat south of Dundas Street East and a few blocks over from St. Michael’s Cathedral. It was also referred to as Arena Gardens or The Arena. Singular! The construction of the arena was estimated to cost around 500,000 Canadian dollars. According to the Bank of Canada’s website (which only goes as far back as 1914), 500,000 dollars adjusted for inflation would be just over 12 million dollars in today’s money. In 1912 it was the largest indoor arena in Canada, holding about 7500 people when used for hockey. The facility was just the third in Canada to feature a mechanically maintained ice surface. It was the home of multiple Toronto teams from when it opened in 1912 through 1931. The list includes the Tecumsehs, Blueshirts, Ontarios, Shamrocks, Aura Lee, 228th Battalion, Arenas, St. Pats, Maple Leafs, Marlboros and Falcons in that order. Between 1931 and the early 1960s the venue was used to host various other events. In 1962 it was converted into a curling, and roller skating rink called The Terrace. The building was demolished in 1989 and now is the site of a municipal park and residential complex. The building was best known for being the location of the first-ever radio broadcast of an ice hockey game in 1923. Foster Hewitt got the call.

Credit: City of Toronto Archives (Mutual Street Arena and the construction of Union Station in 1917)
It’s funny how recently Union station still looked like that.

Advertisement
Ad
Advertisement
Ad
I don’t hate it, but I don’t love it. When we first visited this topic about a month ago, I had a bit of an inside scoop from a trusted source. My source said the jersey was a rehash of a previously done design from the early 1900s. They were correct, but not specific. The proximity of the Heritage Classic to St. Patrick’s day led a lot to believe it would have been a new St Pats themed jersey. But the same source also told me the Maple Leafs will wear their white St Pats jerseys again this season. It wouldn’t have made sense to slap a Heritage Classic patch on those or to have two St Pats jerseys. The return of those jerseys is supported by the Carolina Hurricanes being scheduled to wear their red home jerseys on the road in Toronto on March 17th.

I predicted the jersey was going to be a new version of the jerseys the Leafs wore in 1931, 1996/1997 and again in 2014 for the Winter Classic. In my previous article, I mentioned that even though the game is in Hamilton, it is also a Sabres home game. This made me believe we were getting an inverted version of the 2014 winter classic jersey. Good guess, but not close. I didn’t think they would return to the Arenas design after only five years.
Advertisement
Ad
Advertisement
Ad

The navy blue doesn’t ring true to the old Blueshirts. It’s a different take. You may like it, or you may hate it, but there’s only so much you can do with the same shade of blue and white and the traditional Leaf logo. I see what they’re trying to do by combining the 1917/1918 and 1918/1919 styles. If I am being honest, I think the ARENAS in navy blue gets washed out and looks awkward. NHLunifroms listed the faint ARENAS as a possible nod to Harold Ballard’s petition to have Blue letters on blue nameplates (because it’s about the logo on the front and not the name on the back), but I would say that’s probably a reach. Why nod to him at all? He soured relations with and drove away several storied and beloved players. One thing that makes the Leafs’ regular jerseys awesome is the logo. The Leafs petitioned the NHL in 2016 to make it larger to stand out more. If you want simplicity, I would have dropped the ARENAS wordmark and made the T slightly larger.
Advertisement
Ad
Advertisement
Ad

According to NHLunifroms, they will also be wearing navy helmets, socks and pants as well.

Advertisement
Ad
Advertisement
Ad
The Maple Leafs switched official customizers in 2021 from Sports Lettering Company to Catstitch. To my knowledge, Catstitch does customization work for some CHL teams but is a small operation. The predicament is that they do not accept orders from the public. It’s a situation where you need to know a guy who knows a guy. I know people in the jersey collecting world because I am a part of it, but I do not know these people. With the jersey being navy and not royal blue, if you plan on buying a blank team-issued jersey, you may not be able to find the matching colour nameplate material to have it customized with your favourite player. If you think you’ll buy a game-issued jersey of a player with a long name and strip the name, numbers and reuse the nameplate, Catstitch uses a lot more adhesive. These will probably be a pretty penny on auction from either Fanatics or Real Sports and you wouldn’t ruin something that expensive. I haven’t tried to strip their nameplates myself, but I have heard from people better at it than me, that it is next to impossible to reuse their plates. If you’re a non-collector, we only go to these lengths because Adidas refuses to sell made-in-Canada jerseys as Rebook did. I hope I am wrong because I’d like to add one of these to my collection and prefer not to bankrupt myself by buying a notable player’s game-worn jersey.
If you’d like to see my jersey collection you can do so by clicking here. If you have any questions, feel free to message me on Instagram. I am always happy to help if you’re looking to buy something off eBay, Facebook, Kijiji and have questions about the price, legitimacy or quality of the customization. I can also help recommend the best places to take your blank jerseys to be lettered if you care about getting them done right and want them to last.
Advertisement
Ad
Advertisement
Ad
If you enjoyed reading and would like to check out more of my Leafs content, I have a YouTube Channel where I discuss everything Leafs using advanced stats, contextual information, salary cap breakdowns and more. Check me out at Downtown Sports
History was sourced from the Toronto Public Library’s online database
More from theleafsnation.com