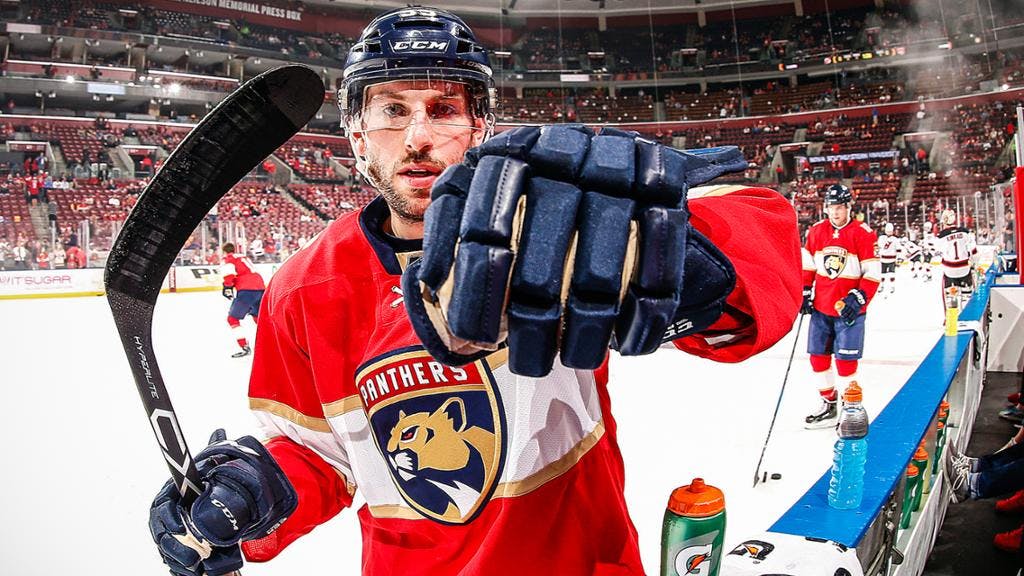 By Christian Pagnani
5 years ago
Comments
‎The Nation Network Notebook is a regular feature that rounds up interesting news, stories, and rumours from around the NHL that don’t quite deserve their own article.
The Florida Panthers trade Jason Demers to Arizona. David Pastrnak signs long-term with Boston. The Ducks will have to deal with some significant injuries to start the season. Please, won’t someone think of Matt Duchene?!

Florida trades Jason Demers, with 12.5% of his salary retained, to Arizona for forward Jamie McGinn. Florida seemed to sour on Demers after signing him to a five-year deal the past summer, and with Dale Tallon back in charge, they get McGinn and his $3.33 million salary for the remaining two years on his contract.
The Panthers save a bit of money in the short term, and get out of Demers’ contract, but it’s a little surprising they couldn’t find a taker for him until now. Demers is still a competent right-handed defender who can play a top four role. His $4.5 million cap hit is okay, but Florida retaining makes him more attractive and this trade a clear win for Arizona. The NHL is desperate for good right-handed defencemen and the Coyotes got one in exchange for a pricey bottom-six forward.
Advertisement
Ad
Advertisement
Ad
Demers rounds out a nice defence group built by John Chayka in Arizona. Starting with Oliver Ekman-Larsson makes things a lot easier, but Chayka has added Alex Goligoski, Luke Schenn, Niklas Hjalmarsson, Jakob Chychrun, and Jason Demers since becoming general manager. That defense should support the Coyotes’ young forwards and he didn’t give up much to acquire then. Aside from cap space and the draft pick used on Chychrun, Connor Murphy and Laurent Dauphin were the most consequential assets given up and that was for Hjalmarsson. Murphy’s an interesting player, but there’s real concerns about what he is away from OEL, while Dauphin is still a prospect waiting to make the NHL full time.
There’s always talk about how difficult it is to acquire good defencemen, but Chayka has built a solid group without giving up premium assets.
Advertisement
Ad
Advertisement
Ad

David Pastrnak re-signs with the Boston Bruins for six years and $40 million.
The cap hit is a little low, considering Leon Draisaitl’s huge eight-year deal was thought to reset the market a bit for young players coming out of their entry-level contracts. Those two are comparable players, but Boston held tough, and Pastrnak’s $6.66m AAV is much more in line with previous contracts signed by Johnny Gaudreau, Fillip Forsberg, and Sean Monahan, than the one Draisaitl signed. The Draisaitl deal might end up being more an outlier instead of the one that resets the market, which is a very good thing for the Maple Leafs as they move into post-ELC deals for their big three.

Murray also hopes to have Vatanen and Lindholm ready to go by start of November.

Anaheim was only a few games away from a Stanley Cup Final last season, but they’ll start this year on a much more difficult path. Ryan Kesler is out indefinitely, and now both Sami Vatanen and Hampus Lindholm are sidelined until November, Bob Murray hopes.
Advertisement
Ad
Advertisement
Ad
If there was any team that it could stand to lose two of their top-four defencemen, Anaheim is probably up there. They’ll have to rely more on Cam Fowler and Josh Manson, Brandon Montour will play an increased role, and maybe a 37-year old Francois Beauchemin has something left in tank?

Matt Duchene will not answer questions. "Only here out of respect for teammates" pic.twitter.com/SHvWrjsFLs

At this point it feels cruel for Matt Duchene and the Colorado Avalanche. Just trade him already, Colorado. We did get this glorious picture out of this saga, but you have to think this is a terrible, awkward scenario playing out at Avalanche training camp.
Are offers for Duchene really going to get that much better? Let the guy go and recoup whatever assets you can.