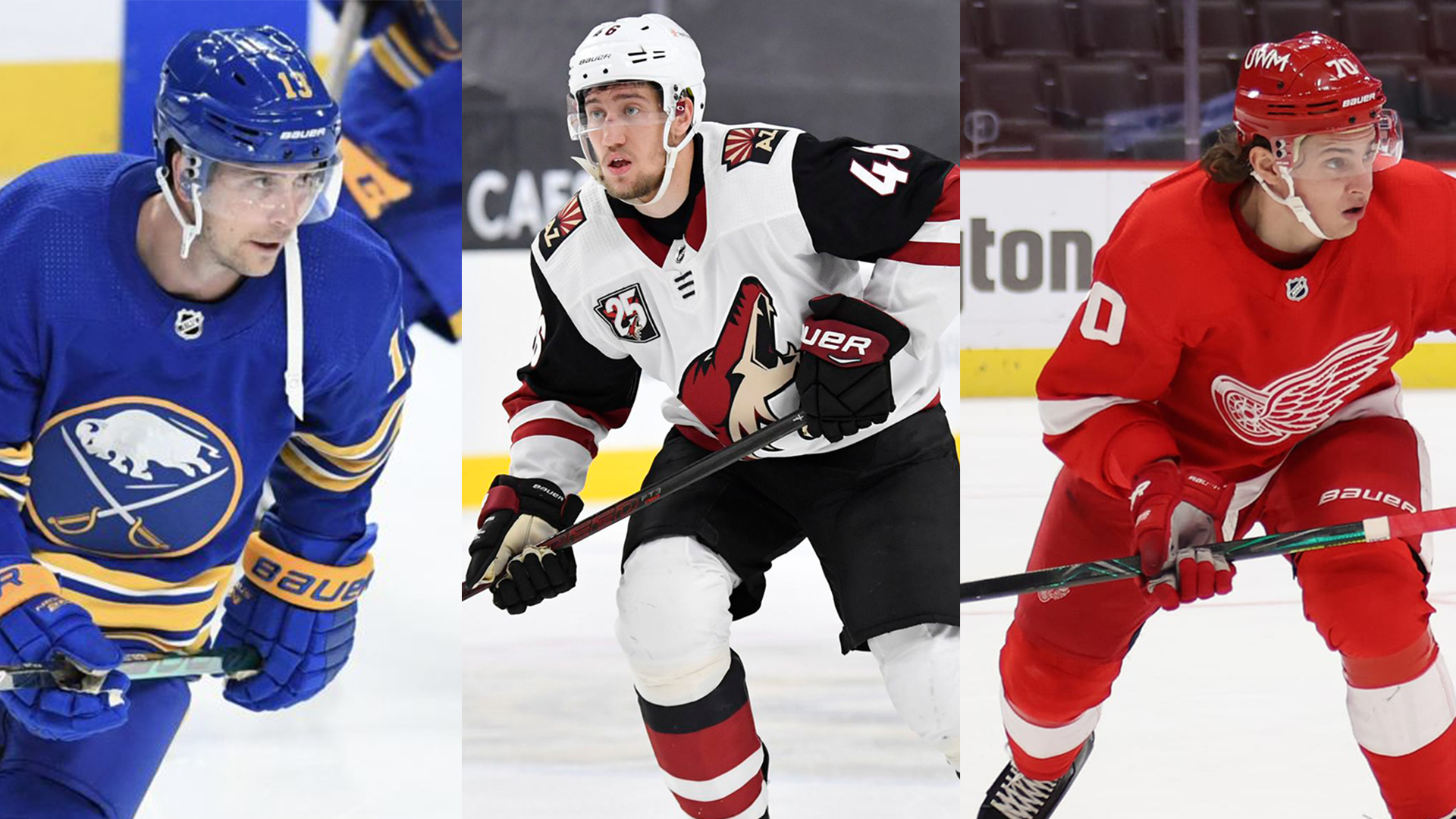 Photo credit: Photo by Jeff Bottari/NHLI via Getty Images,
By Stephen Brown
11 months ago
Comments
In today’s installment of trading for a top-four defenceman, we’ll talk about some lesser-known options that might be available to the Toronto Maple Leafs at this year’s trade deadline. All-Star weekend and Kyle Dubas’ press conference from this past Sunday revealed a lot of what the team is looking to do with the rest of the regular season and trade deadline. We now know for sure that the Leafs prefer to add players with term instead of rental players. We went over how difficult this would be for them to pull off in a previous article last week. To add to this, Sportsnet’s Elliotte Friedman also revealed that the asking price for a rental defenceman is said to be a first and third-round pick.

Elliotte Friedman on Sportsnet says teams are asking for a 1st rounder and a 3rd rounder in return for rental defensemen this trade deadline.

Basically what CBJ got for David Savard when he got traded to TB.#LeafsForever

If the Maple Leafs can’t trade for someone with term, these options should serve as decent backups if they do not wish to pay exorbitant rental prices. Ideally, the Leafs can find someone to eat up top-four minutes playing next to Jake Muzzin. It’s not a knock on Justin Holl, he and Muzzin were not very good to start the season. I’d still like someone better, though. To be fair to Holl, he has been better lately while playing top-four minutes next to Rasmus Sandin. But If you’re able to slot Holl lower in the lineup, that’s how you can create some depth for yourself.

And just to double-check that this isn’t the Sandin effect, here are the with and without stats in 2022.

What Kind of Blueliner Are We Looking For?

But if we’re looking at what type of defenceman the Maple Leafs should look to add, I am reminded of this Sheldon Keefe quote from the middle of January.
Advertisement
Ad
Advertisement
Ad

Specifically, the part where Keefe said, “He’s doing lots of really good things but I think there are some inconsistencies there, particularly with the puck and that’s when things have gone bad for him.”
If Muzzin has struggled to carry and make decisions with the puck, I think it would be best to acquire someone who can help with that. I want the big bruising blueliner, too, but if they can’t help Muzzin with what he’s struggled with this year, what’s the point? Acquiring someone who can’t move the puck well, might compound the problem.
Advertisement
Ad
Advertisement
Ad
The ideal defenceman to me is someone who’s good in their own end when they need to be. But the game plan should be to play outside your zone as much as possible. Obviously, in this article of lesser-known names, the chances of finding that ideal defenceman are low. Good defensive players should be able to lock things down, but also bring the puck out to counterattack or alleviate pressure. Defencemen who can’t contribute to that shouldn’t play that role. At that point, they’re just forcing their team to defend more and the chance for mistakes and goofiness increases. I respect their ability to be good in that area of the ice, but I’d rather not be there at all. I’d like to avoid what happened in the 2018 and 2019 playoffs, where the Bruins picked on one side of the ice and were able to stifle our breakouts because no one on the right side could move the puck. So what we’re looking for is a mix of both, a compromise.
A lot of people miss Zach Bogosian. He came advertised as a tough, stay-at-home guy, but did show some offensive flair at times. Especially down the stretch last season, where he was a very effective player before crashing into the boards and injuring his shoulder.
Advertisement
Ad
Advertisement
Ad

The Russian defender is 6’2 and 201lbs. Lyubushkin plays for a bad Arizona Coyotes team, so an emphasis will be placed on relative and contextual stats. In parts of four seasons, where two have been shortened, he’s played 177 career NHL games. But 2021/2022 has been a bit of a breakout year for him. He’s always produced decent defensive results, but this year he’s doing it while playing a career-high 18:03 ATOI. Plus-minus is a bit simple, but I find it impressive that Lyubushkin is only a -6 when the Coyotes have a goal differential of -70. His 93 hits or 7.18 hits/60 would rank first among Toronto defenders by a decent margin (Muzzin has 74 or 5.93 Hits/60). That checks a box, but I’m sure it’s also a testament to how much time the Coyotes spend without the puck. Can he play, though?
Advertisement
Ad
Advertisement
Ad
Well, his most common partner this season has been Jakob Chychrun, but he’s played a large number of minutes away from him as well. Here’s how the Coyotes stack up with and without him on the ice defensively.

Advertisement
Ad
Advertisement
Ad
Strangely enough, Lyubushkin has found a way to be better away from Chychrun in a heavier defensive role, while the opposite is true for Chychrun. They each play about the same percentage of TOI against the other team’s better players as well. Lyubushkin’s partners all have one thing in common, though and that’s they’re all more offensively minded players. That’s not to say he can’t move the puck well. It just means he’s generally not the primary puck carrier on his pairing. Transition stats aren’t publically available, but in a limited sample from this season, Lyubushkin has been decent. But again, it’s a small sample size. His numbers from last season are not comparable at all. I also worry about how he will fair moving away from a system that tends to play safer and slower. Although, the Coyotes are starting to push the pace a bit and be more exciting to watch. He’s also the type of defender that generates next to no offence. I’d imagine a pairing of him and Muzzin would be a bit on the slow side, too. What’s the asking price? I am not sure, but it definitely won’t be a 1st round pick.

Advertisement
Ad
Advertisement
Ad
Stecher has only played six games this season and will be out for a bit longer. He had wrist surgery back in November but has recently resumed skating in a non-contact jersey. Now, pulling a fast one on Steve Yzerman probably won’t happen. But if he’s not in their long-term plans it would be beneficial for the Red Wings to get something for the pending UFA as they are nowhere close to the playoff picture. The 27-year-old has played 336 career games, most of which came with Vancouver. I’ll admit, he’s been on my radar for the Leafs for a while now. He’s a bit smaller at 5ft 10 and 186lbs but is described by many as being tenacious. He’s been able to produce very respectable results playing about second pair minutes in a defensive role.

Former Marlies video coach, Jack Han mentioned him as someone he was a fan of while with the team. Stecher’s name was also tossed around in rumours back at the 2020 trade deadline when the Leafs considered trading Tyson Barrie. Stecher had an expensive qualifying offer attached to him that offseason and that’s why he was in trade rumours. It’s also why the Canucks decided to non-tender him and let him become a free agent that fall. But judging that he signed a very reasonable $1.7M deal for two seasons early in free agency leaves me to believe there was room to negotiate around that.
Advertisement
Ad
Advertisement
Ad

One of the few players where it's easy to see both why his underlying numbers are usually pretty decent and why his coaches do not play him very much https://t.co/4jUe6kiu8b pic.twitter.com/9rfg4VbrwP

Some more context to Stecher’s 2021 season shows a high volume of turnovers and in the defensive end. Jack did note in a reply that he thought the issue was fixable. Nice to see him rank highly in zone exits and puck battles, though. If you could get him to cut down on the turnovers, he’d be a nice addition to the Leafs. Again, another option that should not cost a 1st round pick.

Pysyk is a favourite of the analytics community and should be available for less than his Buffalo teammate Colin Miller. Pysyk is playing 18:49 of ATOI for a Buffalo team that is once again near the bottom of the standings. At least this time it’s on purpose, I guess. The Sabres this season are an okay defensive team but have struggled to score goals. Again, like Lyubushkin, I worry that Pysyk won’t be as effective once removed from his team’s slower and defence first structure.

Advertisement
Ad
Advertisement
Ad
Pysyk has fared well playing against other team’s top players relative to his teammates. Bad relative to even worse isn’t saying much, though. But to give Pysyk credit, he is playing more of a defensive role in that sample compared to most of his teammates. According to PuckIQ, the Sabres are outscoring elite competition 7-4 in over 200 minutes at 5V5 with him on the ice. Mind you, his most common partner has been Rasmus Dahlin this season, but he’s also played a large number of minutes away from him as well with players like Robert Hagg and Will Butcher.

Advertisement
Ad
Advertisement
Ad
Pysyk’s numbers with and without Dahlin don’t change a ton while having more defensive responsibility. Dahlin away from Pysyk in a much more sheltered role has not been very good. Pysyk also leads all Sabres defenders in shorthanded TOI while having decent results if you needed an extra penalty killer. While he for sure isn’t the primary puck mover on any pairing he’s been on, his transition numbers are good enough in the limited sample size I have available to me. He isn’t the smallest guy at 6ft 1 and 196 lbs, but being a physical presence is not his game. I don’t know if I’m ready to jump on the Pysyk analytics bandwagon, but he is having himself a strong season in Buffalo. He also should not cost you a first-round pick.

Advertisement
Ad
Advertisement
Ad
There are more than three value options available, but I figure three is a good stopping point for today. The trade deadline is still over a month away. More players could become available as we move through the schedule. None of these guys are perfect, but honestly, I don’t think there is a perfect match available now or one that will be by March 21st. Even the guys rumoured to cost a first-round pick or more have pros and cons. The ideal situation for the Maple Leafs remains Muzzin regaining form and staying healthy. That would be more valuable than anyone they could add to their roster. According to Evolving Hockey, from 2018/2019 to 2021, only ten other defenders rank higher than Muzzin in xGAR and WAR. If Timothy Liljegren wanted to take steps in his development over the next month or so, that would be nice as well. Either way, the Leafs are 26-6-2 since November 1st and 10-2-1 in 2022.
More from theleafsnation.com