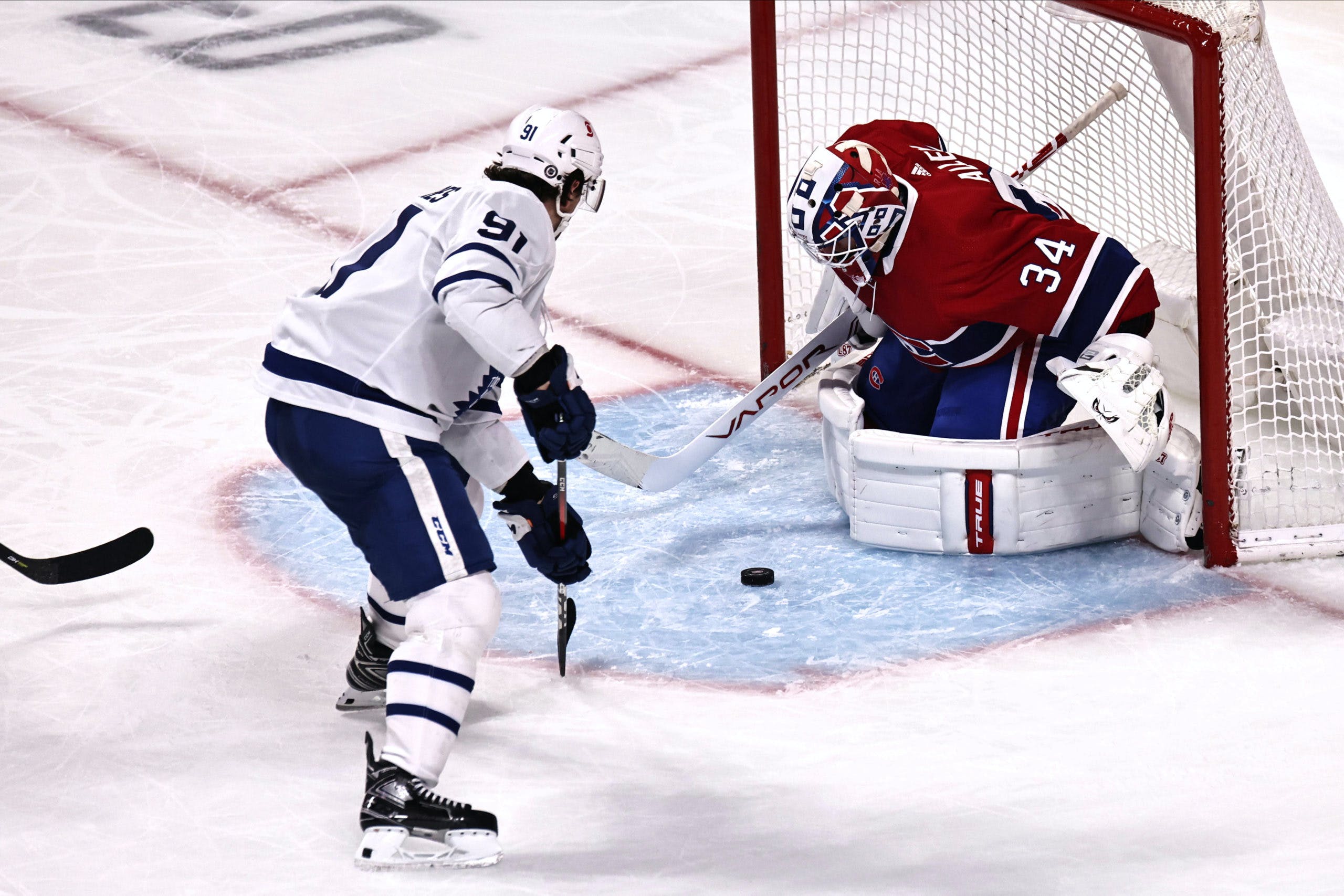 Photo credit: © Jean-Yves Ahern-USA TODAY Sports
By Roxanne Khasow
1 year ago
Comments
Where do I begin with this one? As always, I was excited to watch a good ol’ hockey game between the Toronto Maple Leafs and the Montreal Canadiens, what really gets better than this match up? Well, it turns out a lot of things. I think the Leafs got the start time of this game mixed up, because they ended the first period trailing 0-2, and got outshot by the Canadiens 11-3. The Leafs woke up in the second and managed to bounce back with goals by Auston Matthews and John Tavares. But that didn’t last long as Josh Anderson helped his team regain the lead less than two minutes later. The Canadiens managed to hold on and score another in the third as they ended the game 4-2, and the Toronto Maple Leafs took the L.
Three Stars
3rd Star: John Tavares
Oh captain, my captain! John Tavares managed to tie the game up tonight after a very rough first period by the Leafs. His goal put some much needed energy and enthusiasm into the team, and it looked like the boys were going to make a comeback. They didn’t, but Tavares still had a decent game. With 2 SOG, playing just under 20 minutes on the ice, and 3 goals in the last 5 games, Tavares is quietly doing his thing and playing some good hockey.

John Tavares has 13 goals on the season, which is surprising because most people would have you believe that it’s only 3

2nd Star: Auston Matthews
Auston Matthews is literally on fire. He has 8 goals in the last 5 games, and is leading the league with a total of 32 goals. He had a few good chances tonight, including 3 SOG, played just under 24 minutes on the ice, and opened up the scoring for the Leafs in the second period. I say it all the time, and I’ll say it again, watching Matthews play is so much fun, and I’ll always be thankful that he is a Toronto Maple Leaf.
Advertisement
Ad
Advertisement
Ad

1st Star: Kyle Dubas
In all honesty, I couldn’t think of a 1st Star for this game. It was messy from start to finish. So in honour of the Trade Deadline, my 1st Star goes to Kyle Dubas. Dubas added some key depth players to the Leafs roster over the past few days. Drum roll please, to our defense, he added Ben Hutton, to our forwards he added Nick Foligno, Riley Nash, Stefan Noesen, and Anti Suomela, and to our goaltending he added David Rittich. I’m the most excited to see Foligno put on a Leafs jersey and make some magic happen. The upcoming games should be lots of fun, don’t you think?

40th Star: The Leafs Power Play
Hello darkness, my old friend. I thought the Leafs had broken their power play curse, but apparently not. Out of the last 36 power plays, they have scored once. Yes, one whole time. I’m no coach, I’m not an NHL player, but something has to be wrong, what is going on? This team is stacked with so much skill and talent, and they shouldn’t be struggling when they have a one-man advantage. It’s getting rough to watch, so here’s hoping they figure it out soon.
Advertisement
Ad
Advertisement
Ad

No W, just vibes.
What’s Next?
The Toronto Maple Leafs look to bounce back from tonight’s loss as they come back home to the Scotiabank Arena to take on the Calgary Flames tomorrow night. Take a deep breath, and get ready for some more hockey. Don’t miss the game on Sportsnet at 7:30PM EST.