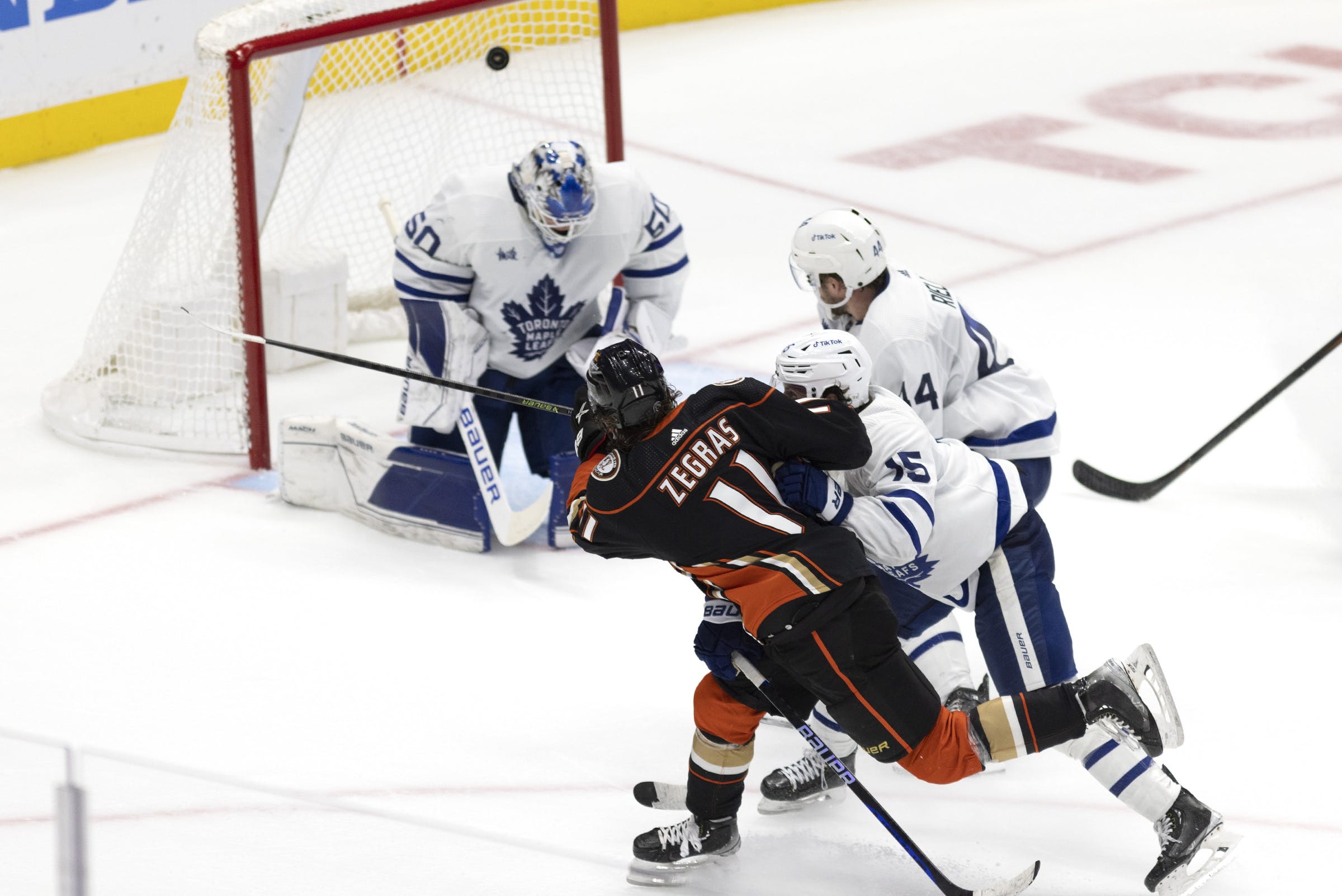 Photo credit: Jason Parkhurst-USA TODAY Sports
By Nick Alberga
3 months ago
Comments
You can add Sunday night’s masterpiece at the Honda Center to the ever-growing list of embarrassing losses for this franchise.

Unbelievably, I think this loss to Anaheim trumps the loss to the ECHL team. https://t.co/2JVcR0Ic1n

Trevor Zegras potted the game winner 2:15 into overtime as Anaheim snapped a nasty seven-game winless skid with a stunning 4-3 win over Toronto. The Leafs are now winless in four straight (0-2-2). With the loss, they fell to 4-4-2 through 10 games.
So, what happened? That is the question.
For all intents and purposes, the game was over. It was 3-1 Leafs in the third and Alex Kerfoot had a chance to give them a three-goal lead on a penalty shot. He missed the net and the avalanche that ensued after that generated a feeling Leafs fans are all too familiar with.
Of course, they coughed it up.
Zegras’ first of the night made it a one-goal game at 7:24, then Dmitry Kulikov somehow beat Erik Källgren on a wraparound to make it 3-3 less than six minutes later. Anaheim actually scored again to grab the lead with less than five to go, but Sheldon Keefe was successful in his challenge of goaltender interference on Adam Henrique.
Advertisement
Ad
Advertisement
Ad
And so, whether they deserved it or not, the Leafs got a point.
Auston Matthews, Denis Malgin and Calle Jarnkrok scored provided the offence, William Nylander notched two assists.
Muzzy’s Muzings:
ROAD TRIP FROM HELL
Flat out, that road trip was unacceptable. Toronto went 1-2-2 and were outscored 16-13 in the process. All things being equal, however, it’s not even the numbers or record that concern me, it’s what I witnessed with my own eyes. There’s no other way to put it, it’s been the same old Leafs to start the season. They’ve lacked purpose, urgency and edge, it’s been a tough watch. I can’t remember the last time this team has looked this fragile —maybe towards the end of the Mike Babcock era.

Say what you want about him, but Mike Babcock was right about this team.

ERIK KALLGREN IS NOT THE ANSWER
Advertisement
Ad
Advertisement
Ad
Källgren is the new Michael Hutchinson. Tell me I’m wrong. This is nothing against the 26-year-old, he’s just not good enough to be a legitimate option at the NHL level right now. Having said that, I do want to pump his tires a bit. Due to everything that happened in the third/OT, the forgotten story in this game was the second period, where had it not been for Källgren, Toronto would’ve been ran out of the building. Enough with the turnovers!
MARNER/KEEFE DRAMA
I love Mitch Marner as much as the next person, but his behaviour and body language this season has been borderline unacceptable. In case you missed it, he was benched for a couple shifts in the third period after his second egregious giveaway of the night (both led to ANA goals). In addition to that, it looked like Sheldon Keefe was giving it to him a bit on the bench during the timeout when it was 3-2, which I think was totally justified. Marner is paid to be a premier player for this team, and lately, it just hasn’t been good enough. Accountability is key.
Advertisement
Ad
Advertisement
Ad

You don't think this team is broken?

Sheldon Keefe just randomly called a timeout with 11:07 remaining in the third after a stoppage of play.

You can sense this game turning.

Highlight of the night: