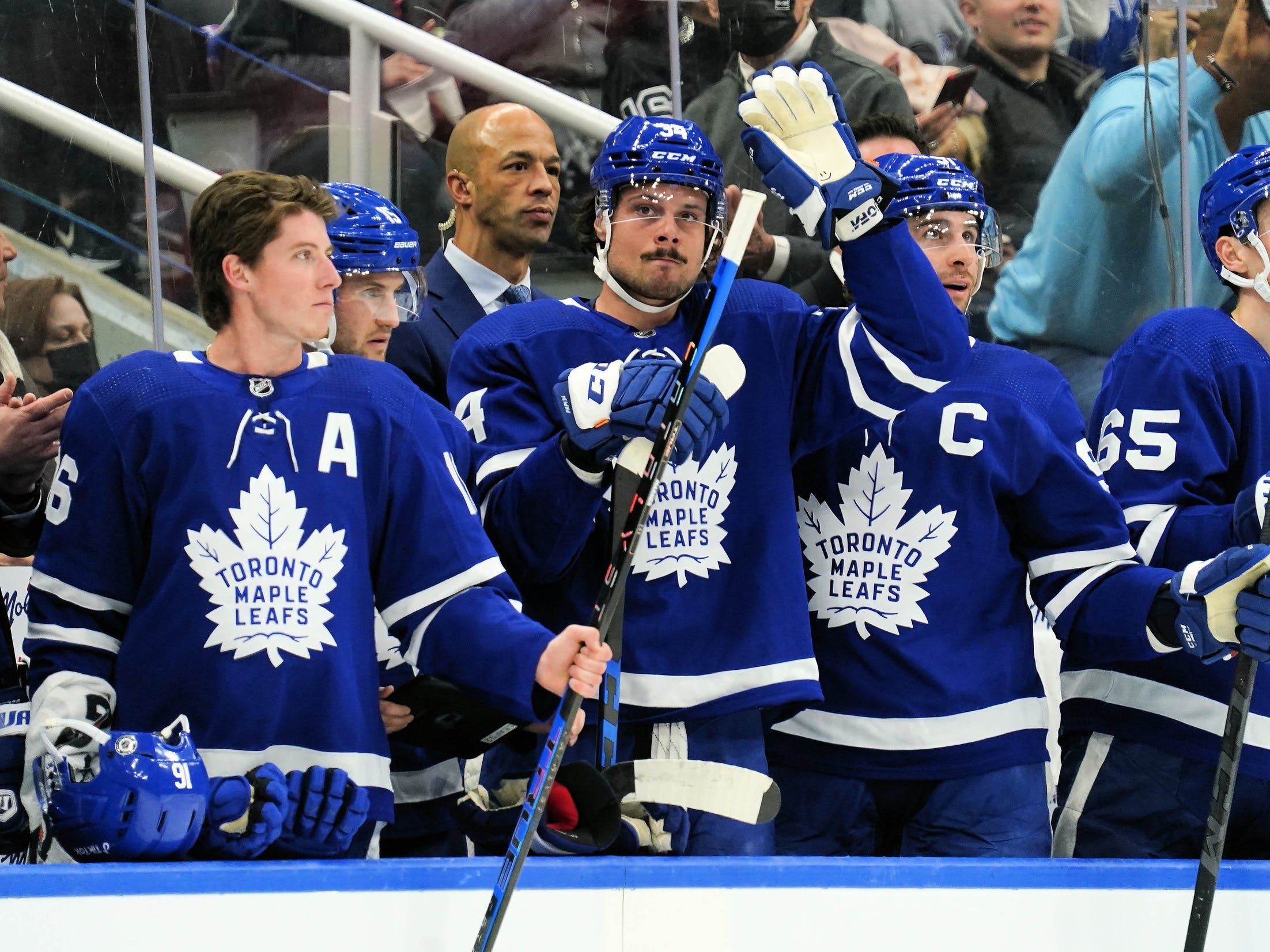 Photo credit:John E. Sokolowski-USA TODAY Sports
7 months ago
The Toronto Maple Leafs clinched a playoff berth for the sixth consecutive season when they defeated the Montreal Canadiens 3-2 on Saturday, but their postseason destiny was a virtual certainty for over a month when the top eight teams in the Eastern Conference fully separated themselves from the pack.
It could have been a really boring April for the Maple Leafs as a result, but Auston Matthews has made sure it has been anything but.
On a night where he was honoured for passing Rick Vaive’s franchise record for goals in a season two days prior, Matthews posted two first-period goals just 27 seconds apart for his 57th and 58th goals of the season. The heater he has been on is so strong that even his head coach had to take a step back during the game.
“Especially on that second goal, (Jason) Spezza turned around and gave me the eyes like this is something special,” Sheldon Keefe said. “I was surprised he stopped at two with the way that he was playing it felt like he was going to have a serious night.”
The first goal have Matthews his 50th goal in his last 50 games. While that doesn’t count for NHL’s official 50-in-50 stat, he did become the first player to score 50 goals in any 50-game span since Mario Lemieux accomplished the feat during the 1992-93 season.
On Thursday, Matthews passed Vaive’s Leafs record of 54 goals with a goal in the second period against the Dallas Stars. He followed that up with the overtime winner in a 4-3 victory. His last four goals were scored in a span of 37:01.
And while the Leafs are saying the right things about finishing strong as they head into the postseason, apart from home-ice advantage, there really hasn’t been much else at stake for the Leafs.
It was just a few months ago that the thought of passing Vaive’s record started to become a reality. Then Matthews scored 13 goals in a March that also included missing two games due to suspension. The increased pace led to questions about if he could get to 60. With just 10 games to go in the regular season, 65 seems possible. Seventy goals seem farfetched but who knows at this pace?
What seems like a certainty now for Matthews is the Hart Trophy. After finishing as a runner-up in voting last season, it’s hard not to vote for Arizona native at this point.
The fans have made their thoughts known when they showered Matthews with ‘M-V-P’ chants throughout the evening.
“You just kind of get chills, chills in your bones,” Matthews said of the crowd. “It’s definitely a cool feeling. This is a special place to play and we’re trying to build something here.”
Matthews’ run has amazed his teammates to the point where it led to a mixed approach when even discussing the star’s scoring in the dressing room and elsewhere.
“There’s definitely an element to it like a starting pitcher where you want to leave him alone but he’s our guy,” Morgan Rielly said. “He’s playing cards on the road, he’s going for dinner so it’s hard not to (bring it up). He’s so focused that it doesn’t matter if you talk to him about it or not. He’s just going to go out there and play.”
Yes, the Maple Leafs still have to prove themselves in the playoffs. Six consecutive seasons of opening-round exits have left a lot fans feeling angst and pessimistic about any regular-season accomplishments.
But with just 10 games to go before the ultimate test begins and nothing but home-ice advantage to be decided, Matthews’ goal total is the single most important reason to watch the game between now and the playoffs.
More from TheLeafsNation.com
POINTSBET IS LIVE IN ONTARIO