Debating “Leafs should run it back” vs. “It’s time for a change” 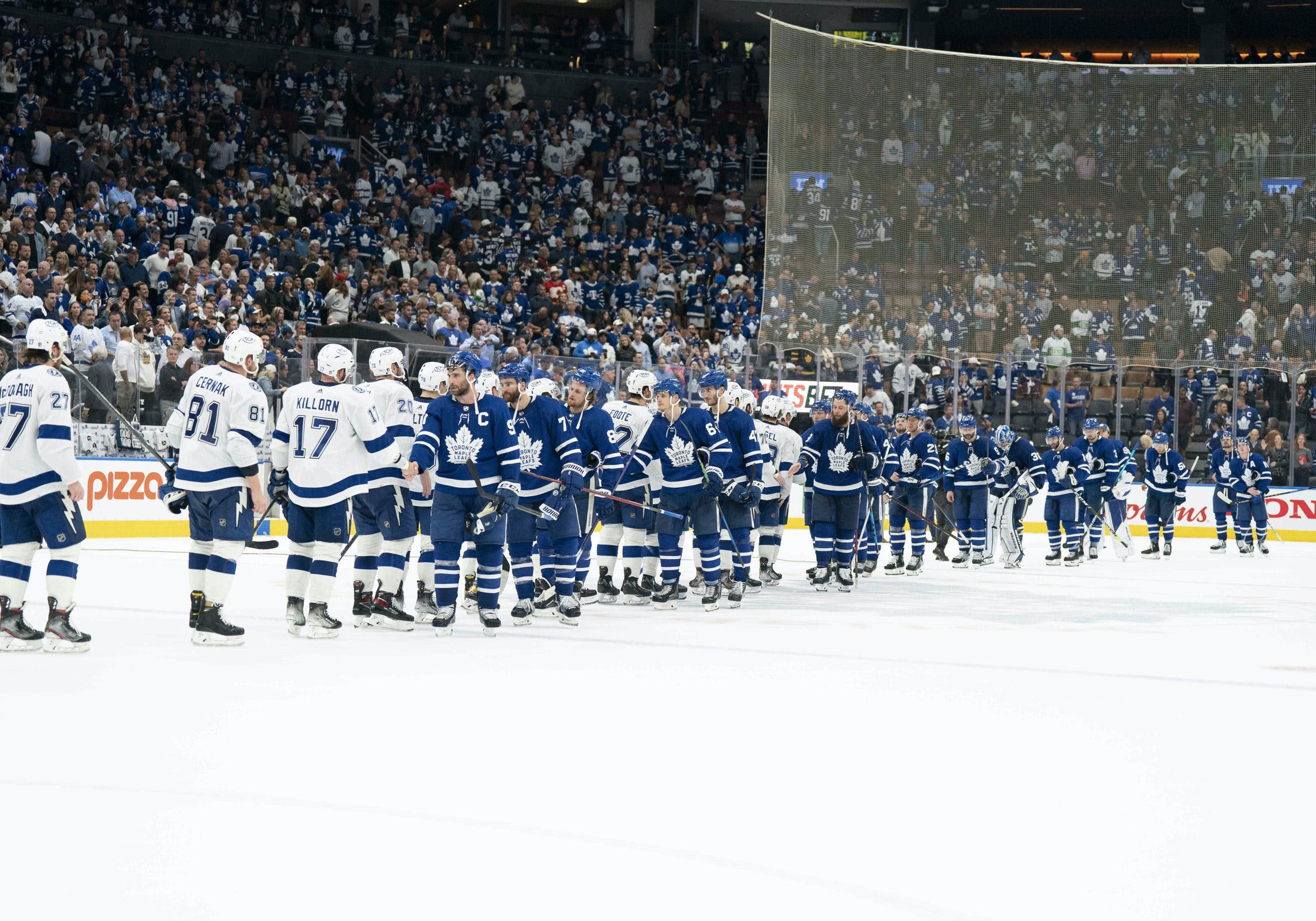 By Jon Steitzer
6 months ago
This debate isn’t going to go away. It won’t go away this offseason, and it’s likely to run in future offseasons as well, but given the strong regular season and how close the Leafs came against the Lightning, there is strong support for running it back. At the same time, it’s been six years with this core, and while they’ve been improving in most years (save for the two COVID shortened ones) there are limits to the number of improvements a team can make when you have $48M committed to 5 players or $58.6M to 7 players if you want to include Muzzin and Brodie in this equation too. It seems that something has to give in that group of seven if the Leafs want to try to upgrade.
Normally when we do these roundtables, I feel like we run the risk of a lot of groupthink, but even the responses that chose the middle ground offer some different takes we don’t normally see. That’s probably a sign that this debate is going eventually lead to a Leafs fan Civil War. For now, here are the responses to Should the Leafs “run it back” or make major changes?

I believe in running it back. The core is good. They fell short again but they’re good. There’s a lot of moving parts in expired contracts up front, so you can make some improvements on the margins that way, or at least get the team back to the same level it was this year. I think it’s a failure for the year to end in a series loss again, but there’s lessons to be learned and positives to take from that failure. That is a different feeling from years past.

I am on the fence about this one. It makes total sense to give this core another chance because they put up a valiant effort against a team that is in the midst of a dynasty. But at the same time, there were ample chances for the Leafs to exorcise their playoff demons and they came up short yet again. Six straight years of bowing out in the first round and five straight years of losing in the winner-take-all game is inexcusable and something will need to give at some point. All I can say is Kyle Dubas needs to ensure he makes the right decisions this summer (as in get a new top six winger, shore up the blue line, and figure out the goaltending situation) because it otherwise means big changes are coming if 2022-23 is yet another year of coming up short.

I don’t believe the Maple Leafs need to do anything big. There’ll likely be a few small changes to some of the lines, but I believe running it back with the team they have now is the smartest move. If there’s a trade that they can make that makes their team better, by maybe moving out a contract like Jake Muzzin’s, I wouldn’t be opposed to it. The defence is going to need a shakeup anyways with Rasmus Sandin and Timothy Liljegren needing a full-time role with the team. When it comes to any other players, I believe Toronto should stay put.

My opinion falls somewhat in the middle. I believe in the core 4, but I think a somewhat bigger contract like Muzzin, a boat anchor like Mrazek and some mid-range salary contracts like Holl and Kerfoot need to be shipped out to  clear the space necessary to re-forge the team structured around the core group. Essentially, where I fall on this is run it back with some big changes around the fringes.

I don’t think you have to make major changes to a team that just put up 115 points with the 29th-best 5v5 goaltending in the league, which is a herculean feat. I do, however, think there needs to be a little more than just tinkering at the edges of the roster, to open up flexibility to address our weaknesses.

My most lizard brain response is simply, “you gave me a short postseason, so you owe me an interesting offseason. Entertain me with trades, signings, and exciting draft picks.” That of course is the wrong way for the Leafs to operate even if it would be fun.
Instead, I’m going to look at it from the view I’ve always had and a tougher one to stand behind when Marner and Nylander had career years, and that is $18M is too much money to spend on two wingers. Toronto needs to pick one and move on to addressing other areas like center depth, defense, and goaltending in the process. That one is a tough sell, so let’s look at a few easier arguments against running it back.
Muzzin looked a lot better in the playoffs, but at $5.625M a year, his health is a growing concern and one that can hold back the roster. After his $2M signing bonus is paid on July 1st, he’s cash cheap with just $6M left owed to him over the last two seasons of his contract, moving on here is significant and allows the Leafs a chance to improve instead of running it back and hoping Jake can be healthy.
Jack Campbell wasn’t the problem in the playoffs, but he isn’t a goaltender that is going to steal a series for the Leafs either. Do the Leafs owe it to themselves to move on from Campbell and Mrazek and to try to find the best goaltender they can? Maybe your answer is no. Cool.
Looking at the Leafs strictly from an entertainment perspective, I feel like running it back is like watching a four hour movie in order to see an alternate ending to something you watched before and your fingers are crossed that this time you’ll be more satisfied. Mixing it up a bit means the regular season will feel like less of a chore, and despite a fun Matthews Rocket Richard run, let’s be honest, the regular season was a chore and one that was supposed to have a payoff during the playoffs. It didn’t and for all the annoying “Last Dance” talk last offseason, it is worth recalling that this year there is at least supposed to be an effort to look at change.
The reality is that even if the Leafs make significant changes many of the key players for next season will be the ones here already. It’s the NHL, not a trade form. Dubas isn’t sending Matthews to the Coyotes, Tavares to Canadiens, Marner to Seattle, and Nylander to Calgary. It would still be shocking if one of those guys is gone, but a 2022-23 opening night roster not including Kerfoot, Mikheyev, Muzzin, Holl, Mrazek, and Campbell is still a pretty big overhaul and not out of the realm of possibility. And I wouldn’t call that a “run it back” situation.
Which side do you land on? Are you in the delightful middle ground? Let us know in the comments below.
More from TheLeafsNation.com
POINTSBET IS LIVE IN ONTARIO