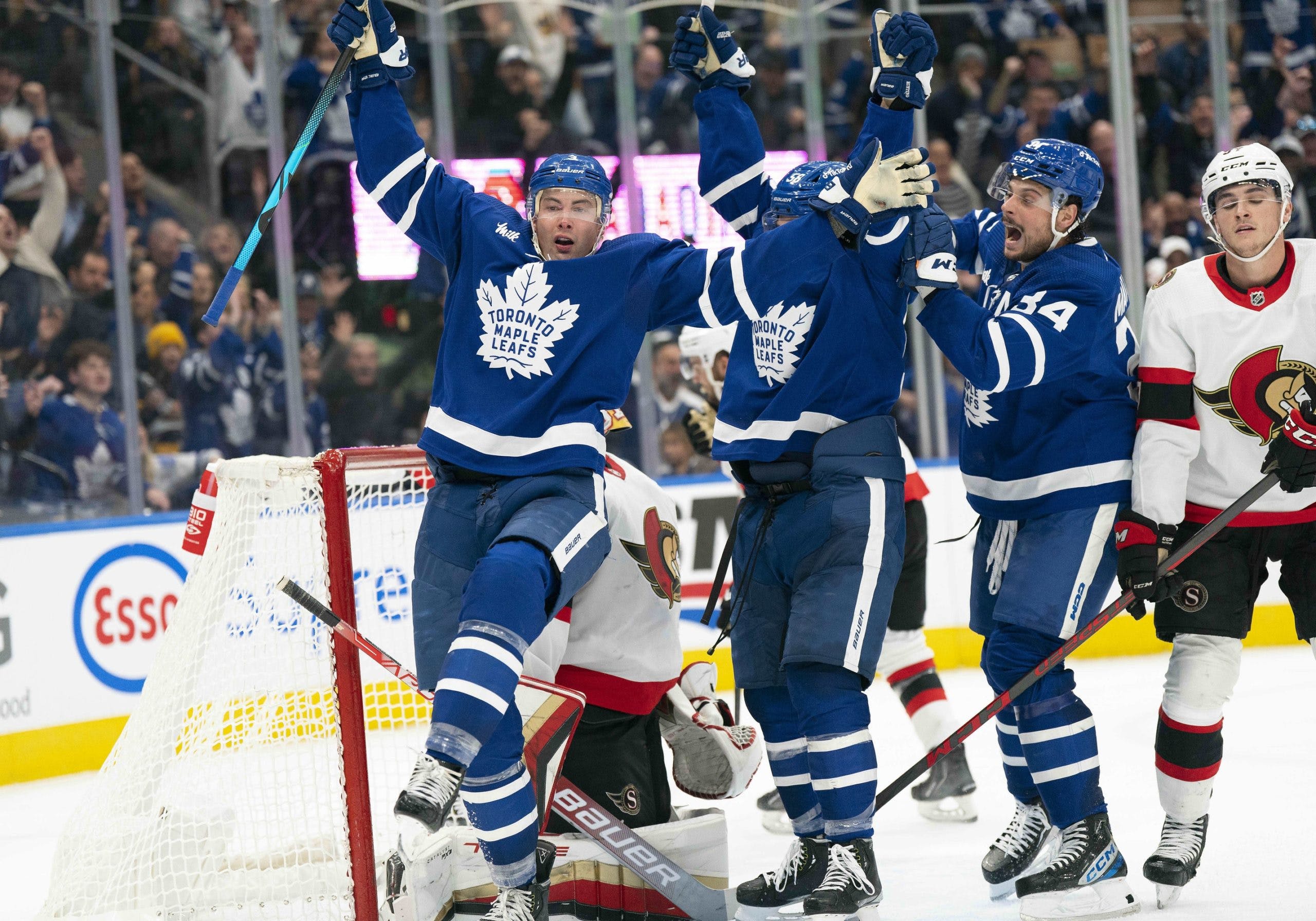 By Nick Alberga
1 month ago
Justin Holl, yes Justin Holl, scored the game winner late in the third period as the Leafs edged the Ottawa Senators 3-2 to take the opening game of the Battle of Ontario.
All you needed to do was tune in for the final 10 minutes of the game, it was very similar to Wednesday night’s opener in Montreal. Toronto and Ottawa combined for three goals in the final 6:38. Holl’s tally was the first by a Leafs blueliner this season and just his 10th career. David Kampf and William Nylander had the other goals for Toronto. Ilya Samsonov made 25 stops for his second consecutive victory. The Leafs improved to 2-1-0 on the early season, the Sens fell to 0-2-0.
Muzzy’s Muzings:
A Win Is A Win Is A
They stuck with it. Early on, it felt like Anton Forsberg was going to have one of those nights, but Toronto persevered. And again, you love to see the unusual suspects chip in from time to time. Who had Justin Holl on their goal scorer bingo card? I know I didn’t. I wonder what that would’ve paid out.
Goalie Soap Opera
Here we go again. Considering the day-long soap opera that preceded the game, Ilya Samsonov delivered another solid start, which was great to see. In case you missed it, Matt Murray was placed on LTIR and will miss at least four weeks after injuring his groin during the morning skate.
This is a big moment for Samsonov. He really has a chance to separate himself, even if/when Murray returns.
K.I.S.S.
Keep it simple, stupid. They’ve been victim of it in the past, and tonight, I really thought Toronto was guilty on many occasions of trying to be too cute with the puck. In numerous situations, they overpassed and actually put themselves in a worse position to score. Mitch Marner was the leading culprit, he’s been fighting it a bit offensively to start the season.
Home Ice Disadvantage?
They need to find a way to pump some enthusiasm into Scotiabank Arena. Honestly, it was a morgue again tonight. And unfortunately, The Rock won’t be available again to game ops anytime soon. I know this has been an ongoing issue for many years, but when’s the last time this barn was considered a tough place to visit for the opposition?
Highlight of the night:
What’s your favourite type of cheese? Mine’s brie.
What’s next:
The Leafs are back in action on Monday night when they host the Arizona Coyotes for the third of four straight on home ice. Unsurprisingly, the Coyotes have struggled mightily out of the gates. They’ve dropped their first two games and have been outscored 12-5 in the process. This one will be the first of two between the Leafs and Yotes this season, Toronto will visit the frat house (Mullet Arena) on December 29th. Can you say trap game? Arizona took both meetings last season.
PSA: Don’t forget to check out ‘Leafs Morning Take’ with yours truly and Jay Rosehill every Monday to Friday morning at 11 a.m. EDT on The Nation Network YouTube page.
Editorials
News
Recent articles from Nick Alberga