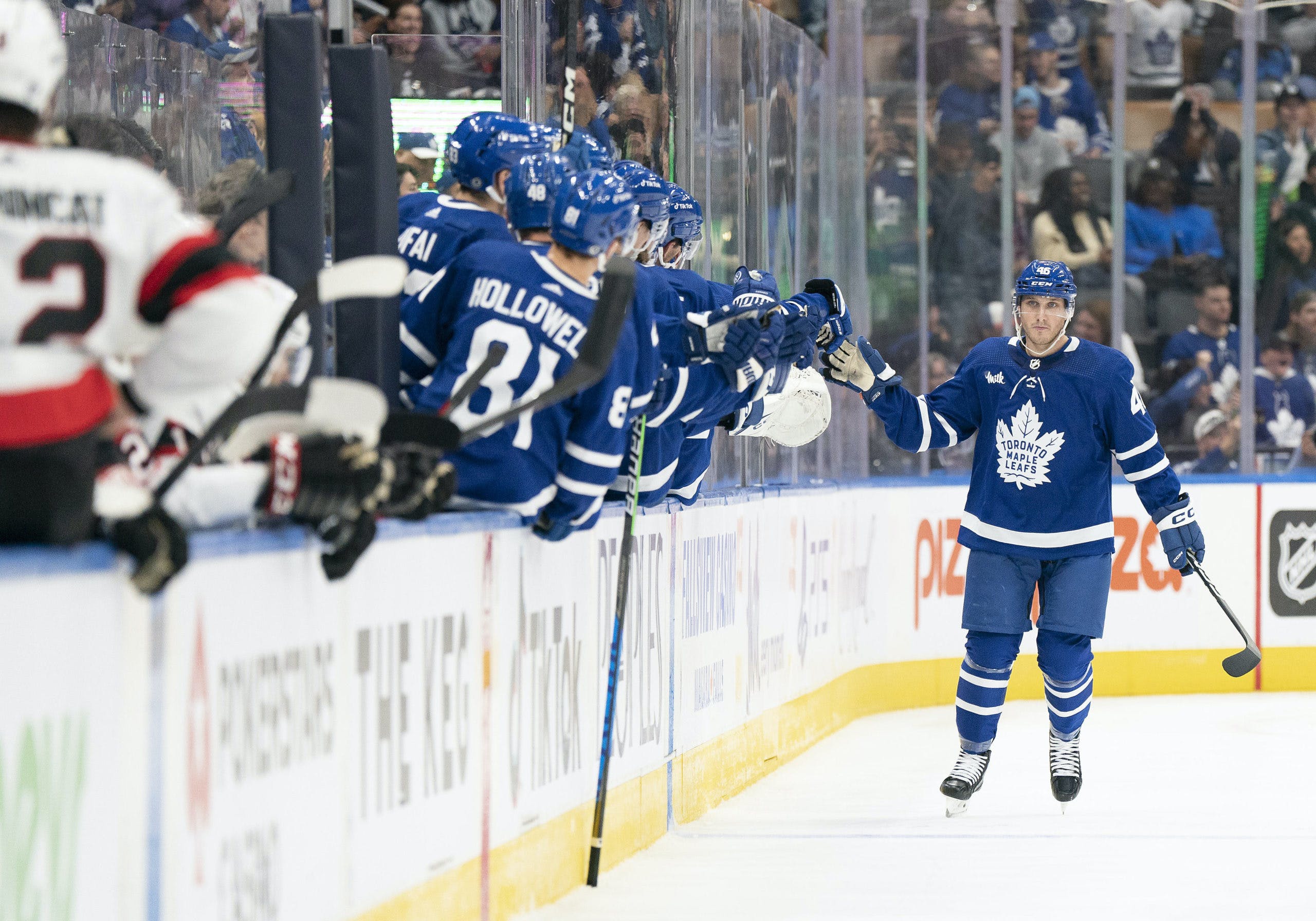 By Nick Barden
1 month ago
The Maple Leafs’ depth is the biggest question mark heading into this year’s regular season, but it seems like that question might be getting sooner rather than later.
There are a number of players vying for a spot in Toronto’s lineup — one being on John Tavares’ wing and another few spots within the bottom six. These few games are a big test for those wanting a role in those positions, to see who might fit where.
Denis Malgin, Adam Gaudette, Zach Aston-Reese, and Alex Steeves — they all stole the show on the first day of preseason games. Nick Robertson and Kyle Clifford, however, did not.
As training camp goes on, the play is only going to ramp up even more. So it’s best to get off on a good foot, especially when you’re trying to secure a lineup spot on the Maple Leafs.
Malgin — on a line with William Nylander and Pontus Holmberg — looked very good in Toronto’s first game of the day against Ottawa. The 25-year-old seemed to have a lot of chemistry with the two and even got on the scoresheet scoring what was the game-winning goal.
Malgin even got some praise from Maple Leafs head coach Sheldon Keefe after the game.
“I think he was good in the first few days. I thought he was excellent here today (Friday). I thought every time he touched the puck it seemed like something good was happening with it.”
One thing I do want to note is that although he did play well beside someone like Nylander, it’s hard to believe he begins the season within the top-six. There’s always the possibility, especially if Robertson isn’t a fit, but I cannot see another right-shot playing on Toronto’s left wing.
That is, unless you’re named Zach Hyman.
It’s more than likely that if all else fails, Keefe tries Calle Jarnkrok within Toronto’s top six. He had a strong debut in the blue and white, scoring two goals in the second game of the doubleheader. Keefe also said earlier this week that Jarnkrok could be a fit there.
Another player who had a strong first impression was Steeves. He played in the first game and was able to pot two goals — one on a nice tip from a Mark Giordano shot and one in the empty net. The 22-year-old showed a lot of poise and confidence with and without the puck against Ottawa on Saturday.
If Steeves keeps up this play throughout the preseason, he could find himself with a job on the Maple Leafs sooner rather than later.
Two players I was most interested to see play were Aston-Reese and Gaudette, and they didn’t disappoint. Aston-Reese was his usual self — throwing hits (he had four in the game) and being a physical threat on the ice.
He didn’t bring much in the offensive zone, but with more time in the Maple Leafs’ organization, Aston-Reese could find his touch.
Gaudette, playing alongside Mitch Marner and John Tavares did look very good as well. He brought a lot of speed and bite to that line. The trio did get a fair number of scoring chances but weren’t able to pot any into the back of the net.
What’s interesting is that Gaudette played on the first power play unit. He did play with Tavares and Marner, so it may have been a given. But it’s interesting that it was Gaudette over someone like Malgin.
Maybe there’s something there, maybe there isn’t.
The most surprising development throughout the evening was the fact that Robertson wasn’t on Toronto’s power play very much. The Maple Leafs had four opportunities with the extra man and Robertson only had 1:08 of power play time.
It could’ve been because his play wasn’t the best in the game, or maybe it’s because they’re trying him in different spots. Either way, it’s a fascinating development and will be interesting to see what happens with the 21-year-old throughout the next few weeks.
This, though, was only games one and two. You can create a lot of narratives after the first few games, but those can easily change if a certain player has a very good game.
But what I’m trying to say is; let’s give these players a few more games. Although it may be fun to figure out who might be in Toronto’s opening night roster, there’s still five more preseason games left to decide that.
More from TheLeafsNation.com: