Notes from Team Canada vs. Czechia at the World Juniors 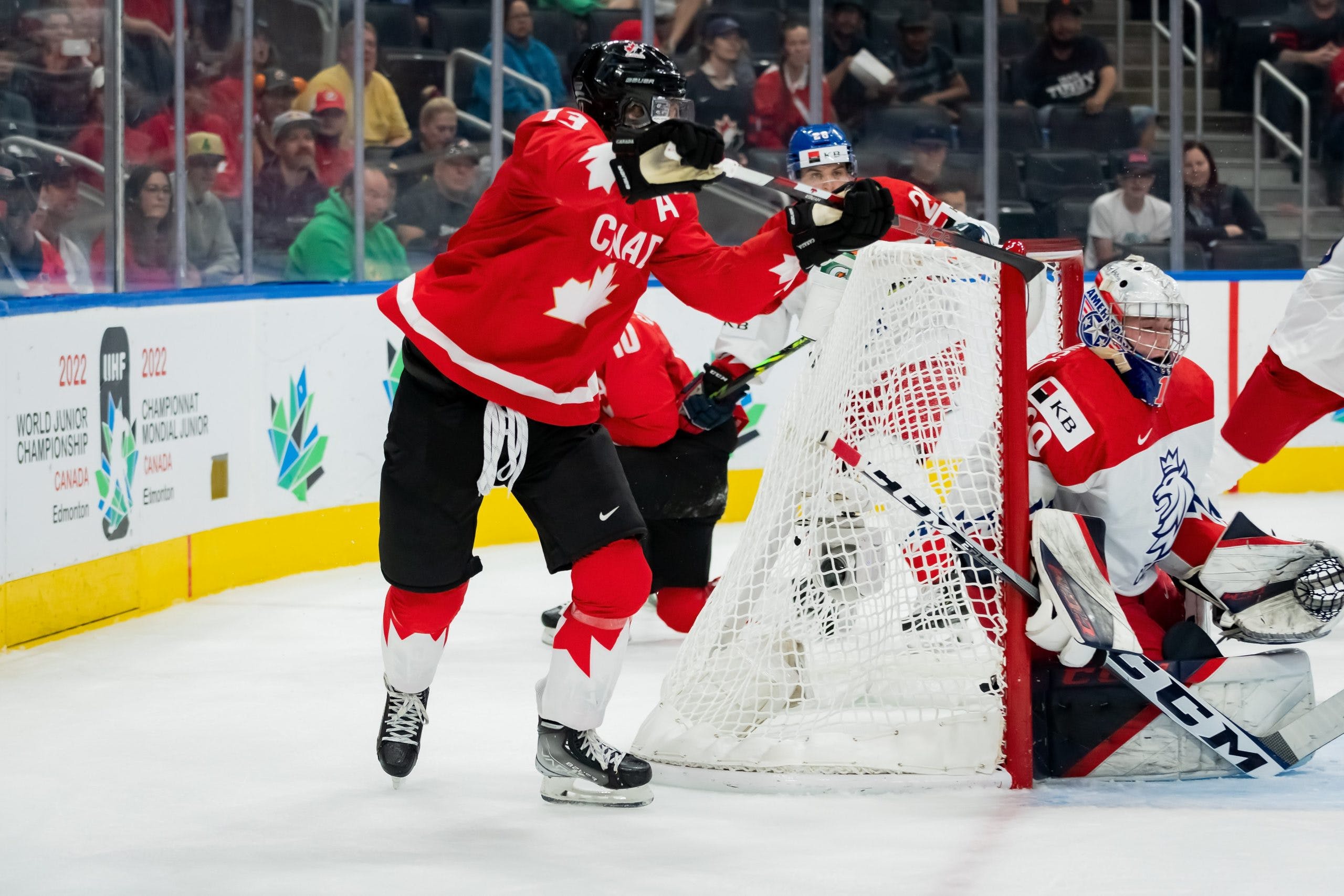 By Jon Steitzer
3 months ago
Covering the World Juniors is strange. No ads on the boards. No ads during stoppage of play. The Zambonis are plain white. There’s not a Tim Hortons, Canadian Tire, or Telus ad in sight, and while this is generally a positive thing, how we got there is certainly not, and that reasoning has been looming all day as I experienced my first couple of games of World Juniors coverage.
Watching Canada play is definitely a bit different too. In contrast to the game between the United States and Austria, there was certainly a notable crowd for the game between Canada and Czechia, but in the lower bowl the number of empty seats still outnumbered the filled. Those who chose to show up are certainly showing up for Canada though. There’s no hesitation to cheer for the Canadian players, no matter what the Hockey Canada jersey might represent at the moment.
As for the game itself, both teams certainly delivered on providing a product worth tuning into. The early first period push by Czechia, and their ability to pull ahead with a shorthanded goal while killing off a five minute major was not expected. That should have been the end of Czechs then and there and they came out of that five minute stretch on top.
Of course after that the reality of how good Team Canada is started to kick in. Connor Bedard is very much one of those unique talents that can absolutely take over the game by himself and he can seemingly will the puck onto his stick and manages the play like he is conducting an orchestra. His quick touch pass to Mason MacTavish shows his vision beyond his own play as he sprung his center for an easy goal.
The play of Kent Johnson is something we’ll all be talking about for years as well. He’s seemingly Canada’s answer to Trevor Zegras as a player who will always choose the most electrifying way possible to get the puck to the back of the net. Scoring a lacrosse goal to give Canada the lead is one thing, but the frequency in which he goes between his legs to pass and shoot will lead to a lot of people caring about the Columbus Blue Jackets in the future.
On the other side of the ice you have to give it up for Tomas Suchanek who looked like he was singlehandedly going to keep Czechia in the game, but the reality of 23 shots in a period often leads to the reality that you aren’t going to keep the puck out of the net forever. The still undrafted goaltender will be playing for the Tri-City Americans of the WHL this season, and it will be interesting if this spotlight puts him on anyone’s radar.
A 57-23 shot, and 5-1 score in favour of Canada probably doesn’t do justice to the initial effort shown by Czechia in the early stages of the first. While an upset was always going to be a stretch, it did feel it was going to be less of a dominant outing for Canada. It is still very much shaping out to be a four team tournament between Canada, Finland, Sweden, and the United States.
Czechia will be back at it later on Sunday in a game against Latvia, which should go slightly better for them despite the fatigue. Canada gets Sunday as a day of rest and will be facing Finland on Monday in what will be their biggest test of the round robin portion of the tournament.
More from The Leafs Nation: