The Beginner’s Guide to the 2020-21 Toronto Maple Leafs: The Offense 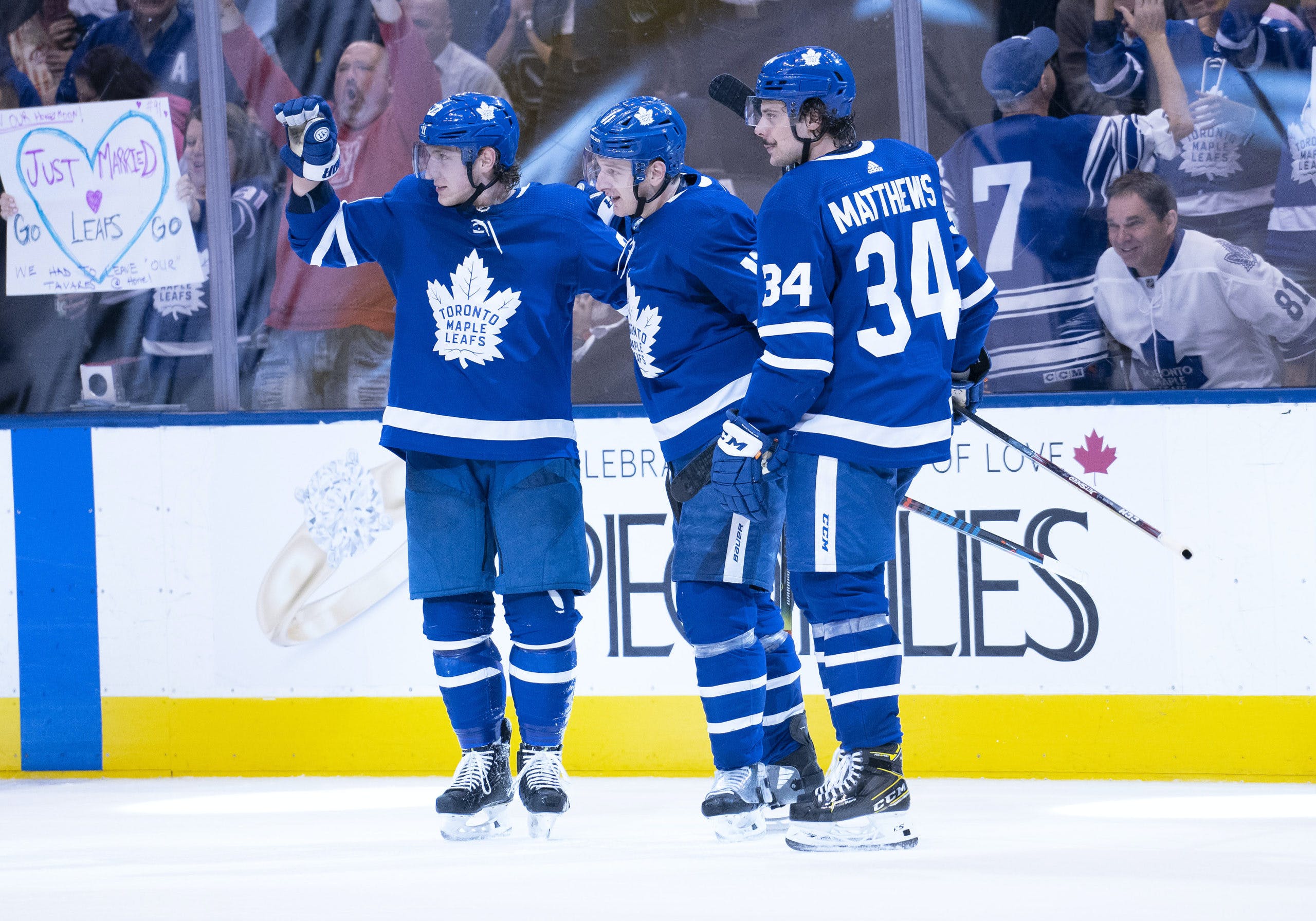 By Scott Maxwell
1 year ago
Hello, and welcome back to my Beginner’s Guide series for this year’s Toronto Maple Leafs. If you missed it, I introduced the series on Friday talking about the team in general, but now we get to talk a bit more about the players themselves. Today we’ll be focusing on the offensive side of the ice, so I’ll provide you with some expectations for our offense and our power play, as well as the forwards. Let’s get right to it.

Part of what has made the Leafs a consistent playoff team over the last few years is their skilled and speedy forwards. That starts at the top with our main core of Auston Matthews, John Tavares, Mitch Marner, and William Nylander (and Morgan Rielly on the back end being an offensive minded player as well), and in the past few years has also trickled down on the depth charts as well.
Because of a need to move out money to improve our defense, that isn’t as much of the case this year. While we still have a pretty good bottom two lines, there are a lot more question marks this season than in the past. While we have plenty of forwards to fill out the depth chart, none of them are guaranteed to be a hit for us aside from Alexander Kerfoot.
So, this could lead to us being less offensive than past years, but with most of the main core entering their prime, they might be able to carry the load a little bit, with the depth chipping in when necessary.

Their offensive talent has definitely shown up on the man advantage as well. Over the last four years, the Leafs have the fourth best power play, converting on 23.5% of their chances. Only the Tampa Bay Lightning, Boston Bruins, and Pittsburgh Penguins have done better on the power play. That’s pretty good company. A lot of this is once again due to the main core of players, and the flexibility that’s come with it. In 2016-17 and 2017-18, the Leafs mostly split their elite players into two units, and had the second best power play in that span as a result. The last two years, they’ve loaded up the top unit and played them most of the time. While it hasn’t worked out as well, they’ve still had the seventh best power play during that time as a result.
Right now it looks like they’re going to split the units, but who really knows by the time the season starts. In the past, they’ve usually just had Matthews/Tavares/Marner/Nylander/Rielly as the top unit and mostly used that, but we’ll see what they end up going with (and how long it lasts).
Does this team’s power play sound fun to watch? Well too bad, you’ll probably only see it once or twice a game this season. Over the last four seasons, the Leafs have had the third fewest power play opportunities in the league. And it’s not because every team is just magically more disciplined when they play the Leafs, it’s mostly because of a couple unwritten rules the referees have. First off, they love to keep the calls even, and the Leafs have taken the fourth fewest penalties in the league, which means they aren’t going to get many calls their way either. Another big reason is that the refs have a fear of “influencing the game” by giving a skilled power play like the Leafs lots of opportunities, because it would make it easier to win games, even though by not doing their job and calling penalties, they’re still influencing the game in an even worse way.
Trust me, you’ll hate the refs by the end of the season.

Aug 6, 2020; Toronto, Ontario, CAN; Toronto Maple Leafs head coach Sheldon Keefe congratulates Nicholas Robertson (89) after scoring his first NHL goal against the Columbus Blue Jackets during the second period of Eastern Conference qualifications at Scotiabank Arena. Mandatory Credit: John E. Sokolowski-USA TODAY Sports
Nick Robertson
Robertson was a second round draft pick for the Leafs in 2019, and had a very quick development, playing so well in the OHL that he ended up making the Leafs team in the playoffs. He got a goal in their series against the Blue Jackets, and we all loved it. He’s a solid skater, and he has a really good shot, and once he really finds his groove in the NHL, he could be a pretty good top six winger. He’s also only 19, so be patient with him.
Jason Spezza
Spezza was once a high end center for our provincal rival, the Ottawa Senators, and we really didn’t like him because of that. However, he’s 37 now, and he still hasn’t won a Cup, so he’s joined the Leafs these past couple years to try for it. He’s not the playmaker that he used to be, but he’s become a really good defensive center, and can still put up points, and also provides that veteran experience that is always needed.
Joe Thornton
Much like Spezza, Thornton is not the player he once was. In his prime, Thornton was one of the best playmakers in the league, probably even of all time, but at 41, he’s in the same position as Spezza. He wants a Cup, and he thinks his best shot is with the Leafs right now. It seemed like he was never going to leave the San Jose Sharks, but he has brought his still really good playmaking skills with him to Toronto. He’s currently slated to play on the first line with Matthews and Marner, but he’s probably going to be more of a depth player this season.
Travis Boyd
Yeah, don’t worry, we don’t really know who this guy is either.
Pierre Engvall
Our big long-necked boy was a 7th round pick in  2014, and surprised many by actually becoming a decent NHL player. He put up solid point totals in 2019-20, but he isn’t really expected for that. What he is for sure is a defensively responsible fourth line winger who can also play center, and be slotted into the middle six when injuries make it need be. The perfect utility player, if you will.
Alexander Barbanov
Like how Mikheyev was our signing from Russia last season, Barbanov is that this season. Because of that, we still don’t know exactly what to expect from him, or how he’ll handle NHL minutes, but I’m sure Leafs fans will either love or hate him, with no in between.
Nic Petan
Dubas traded for Petan a couple years ago, and while he had upside then, that has mostly faded away now. He’s got some skill to be injected into the lineup when injuries require, but he lacks the consistency to be in the lineup every game.
Joey Anderson
The Leafs recently acquired Anderson this summer in a salary dump deal, getting rid of Andreas Johnsson’s contract. He’s had decent underlying numbers when he’s played, and he’s only 22, so there’s the potential for something there.
Denis Malgin
Malgin was brought in last season in one of Dubas’ low key good trades, but up to this point Malgin hasn’t played a significant role for the team. He has the skill and the upside to be a solid middle six player, but he isn’t quite there yet. There’s also a good chance that he’s staying in Europe this season, after playing there during the offseason.
Uncategorized
Recent articles from Scott Maxwell