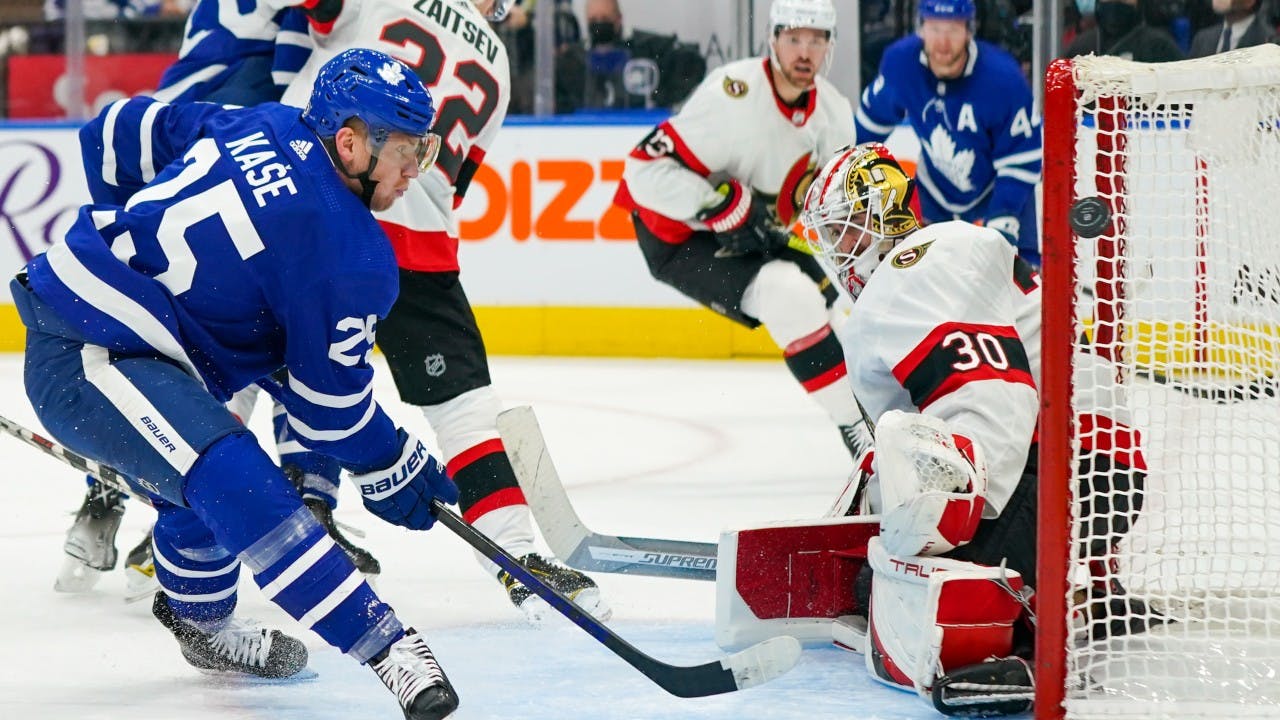 By Stephen Brown
1 year ago
Comments
Ondrej Kase has been a real feel-good story for the 2021/2022 Toronto Maple Leafs. He’s finally healthy and playing games consistently after being sidelined with several injuries over the last few years. To boot, he’s even played most of those games on the same line as childhood friend David Kampf. But if you can imagine topping that, his play has been dynamic in any role he’s been asked to fill. Penalty killer? Sure. Offensive play driver on a shut-down line? You bet. Efficient PP scorer? Absolutely. Covering for injuries in the top 6 and not looking out of place? Certainly. Driving the net like a crazy man while rocking a bushy moustache? Why not? Is there anything not to like?

I would add to this another fun tidbit that is probably not gonna go viral like that one but..

19yo Alex Kerfoot trained with 13-14 Chomutov team in summer of 2013 and both 17yo draft eligibles Ondřej Kaše and David Kämpf were on that team as well. Played who season there. https://t.co/Bh9cqRAqUH pic.twitter.com/5hqXBgK9Kj

It’s a small world. But today, I wanted to focus on Kase’s time spent playing in the top 6 and see if he should remain there even after everyone has returned from either injury or COVID protocol. To start, I want to go back to November 13th against the Buffalo Sabres. Coming into this game, Kase had scored in back-to-back games against the Flyers and Flames. That night against the Sabres he played a season-high 17:52 and kept his goal streak alive. Previous to this game, he had only averaged 12:31 of TOI and had four points in 15 games. But after that game in Buffalo, his role continued to increase. In his next 15 games, his ATOI went up to 16:30 and he tallied 13 points and five goals in those games. The more he plays, the better he gets.
Advertisement
Ad
Advertisement
Ad
Tuesday night, the Leafs took on the Vegas Golden Knights and squeaked out a 4-3 win in the shootout. The victory was mostly on the back of another fantastic Jack Campbell performance, as the team was heavily outplayed in the final 45 minutes of the game.

Despite being outplayed, the combination of Bunting – Matthews – Kase held 91% of the expected goals, 66.7% of the shot attempts and 71.43% of the scoring chances in 13:22 TOI at 5V5. The trio did it again on Wednesday night against the Coyotes as well, controlling 52.38% of the shot attempts, 74.55% of the expected goals and 64.29% of the scoring chances at 5V5. As much as I want to give credit to Bunting and Kase for those numbers, I think we can all agree Wednesday was the Matthews show. Worth noting, the trio hasn’t been on the ice for a goal against in over 56 minutes played at 5V5.
Advertisement
Ad
Advertisement
Ad
The third member of that line is usually Mitch Marner, who is currently in COVID protocol. Both he and Pierre Engvall are set to join the team in Arizona tomorrow and presumably, play against the St Louis Blues on Saturday. The article may come off as me advocating for Kase to remain in the top 6, but I am genuinely curious and asking a question that we can hopefully answer by the end. I’m not suggesting the Leafs split up Auston Matthews and Marner. The two have come together to form one of the best regular-season duos (sad noises) in the NHL since being paired together at the beginning of last year.

Advertisement
Ad
Advertisement
Ad
Matthews has no doubt been better next to Marner over the last two seasons. Surprise, right? The best goal scorer in the NHL is better playing next to one of the best playmakers and vice versa. I am not saying to ride or die with the duo and relentlessly throw them over the boards no matter what. I am just saying that generally, they deserve to play together. To further cement that the Leafs should not break up Matthews and Marner, here is where the trio including Bunting ranks in terms of expected Goals percentage compared to other lines in the NHL this season. For me, Bunting – Matthews – Marner is the clear choice for the top line.

It’s a conversation for another day because this article isn’t about Marner, but it is worth noting that while Matthews is at his best next to Marner, Marner hasn’t faired well without Matthews the last two seasons.
Advertisement
Ad
Advertisement
Ad

But again, the article isn’t about Marner, so we’ll carry on looking into Kase. Kase has spent the majority of his ice time this year playing on the Leafs’ shutdown line next to Engvall and Kampf.  The numbers for Kase have been excellent regardless of the role he’s played. Especially his time with Pierre Engvall and Kampf, where almost nothing of note happens if you’re looking at the GF/60 and GA/60. They rank 24th in the NHL as a trio in expected goals against min. 100 mins at 5V5, while playing heavy defensive minutes.

So, would taking Kase away from that line long-term be a good idea? It seems as though these are the lines Keefe wants to roll with when everyone is healthy. But it is important to note that this is the only game all season where every forward has been healthy and available to play.
Advertisement
Ad
Advertisement
Ad

Who you got scoring our first goal of 2022? 🔮🚨#LeafsForever pic.twitter.com/Aak0I0zKvb

So, if Kase doesn’t get a spot on the top line with Matthews, should he play with John Tavares and William Nylander then? Well, Alexander Kerfoot is on pace for a career season. The 27-year-old is currently on pace for 58 points and 14 goals. Not to mention, Kerfoot has been the third link with Tavares and Nylander a lot the last few seasons. Kase has only been on the ice with Tavares for just over 14 minutes at 5V5 this year.
However, I am excited to see what Ilya Mikheyev and Kase can generate together while playing on the shutdown line. Out of 358 Forwards, since the 2019/2020 season to play at least 1000 minutes at 5V5, Mikheyev ranks 75th in scoring chances per 60. Mikheyev has been known to generate a lot of quality chances, but not be able to convert on them at a high or even reasonable rate. But he does have four goals in his last five games, so maybe his fortunes are starting to change. With Kase’s daredevil nose for the net and Mikheyev’s knack for generating opportunities, maybe there’s some potential for some greasy goals to be scored.
Advertisement
Ad
Advertisement
Ad
As we mentioned earlier, Kase was only added to the Maple Leafs’ powerplay in early December when Marner went down with a shoulder injury. But the league’s top powerplay did not see a drop without one of the best playmakers in the game.

Ignore my mess of a Frankenstein chart. I had to include Biega to get the line tool to display the information I needed. The top row is showing the stats for the Maple Leafs PP without Marner from November 29th until now. The Leafs generated more shots and scoring chances and it led to an abundance of goals. Whatever they were doing, it was working. Now, of course, the sample is only in 19 minutes. Again, I am not throwing shade at Marner. I am only using him as a comparison because Kase has more or less filled his role while he’s been injured.
Advertisement
Ad
Advertisement
Ad

In the end, I don’t think we should ever complain about having too many good players. The fact that Kase has been as good as he has been and Keefe has been able to lean on him to play multiple roles is good for the team. Having options and being able to review the tape from those 19 minutes or so when Kase was on the PP filling in for Marner is good for everyone. I know the stat that everyone points out is it’s been almost two calendar years since Marner has scored a PP goal (February 1st, 2020). But skilled players like Marner should be able to figure it out. At least we hope so anyway.
I don’t know if Kase should remain in the Maple Leafs’ top 6 once everyone is healthy, but I am happy he’s an option should they need him. If anything, the boost in ice time and responsibility since the middle of November has been well earned. The Leafs should probably look to continue to mix him in as much as they can moving forward.
Advertisement
Ad
Advertisement
Ad