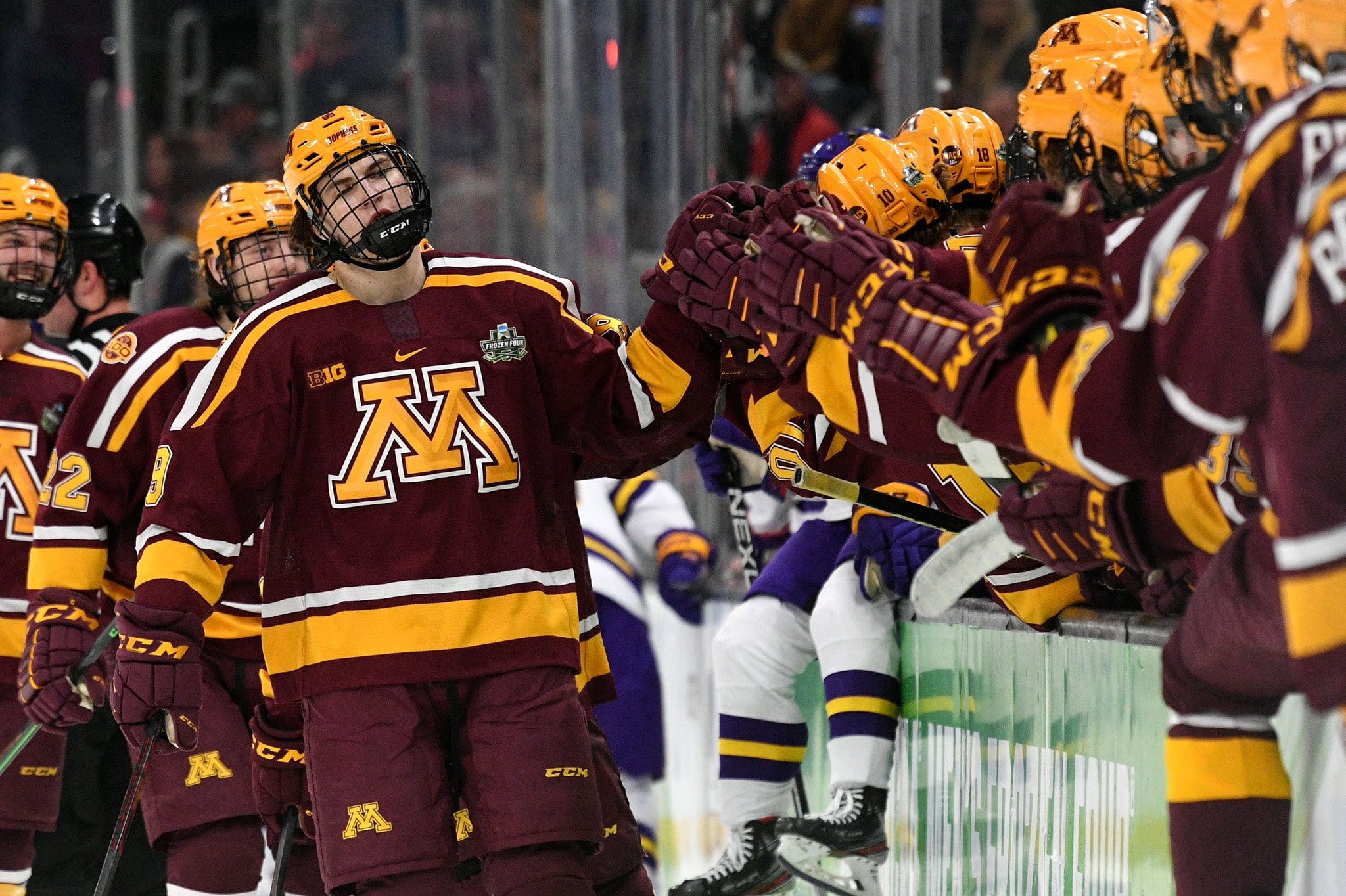 Photo credit: @MinnesotaOnBTN
By Jon Steitzer
9 months ago
Comments
While all eyes were rightfully on Auston Matthews’ record setting night, there was another game of importance being played with a less than ideal outcome for the Leaf prospects involved in it.
The University of Minnesota suffered a 5-1 defeat, knocking them out of the Frozen Four. This has implications largely tied to Matthew Knies, but it certainly seems worth mentioning a couple of the other players worth paying attention to out of this as well.

Matt Knies and Bryce Brodzinski head in on a 2-on-0 rush and Knies finishes it to give Minnesota a 1-0 lead.#LeafsForever pic.twitter.com/Loochly1ke

I guess we can take comfort in the fact that Matthew Knies was the only Gopher who got on the board, and that it really was a nice 2 on 0, but it clearly wasn’t enough and now we’re weighing the pros and cons of whether bringing him into the fold is the right decision for the Leafs, for Knies, and of course all of this is dependent on whether Knies wants to leave University, which at this point it doesn’t sound like he wants out.
Advertisement
Ad
Advertisement
Ad

Kyle Cushman put together a very detailed argument for why Knies staying with Minnesota makes a lot of sense, but I’d counter with there not really being much harm from having the kid around the Leafs for the rest of the season and getting some exposure to the pro life. A contract with the Leafs opens up a lot more that can be done by the player development department to work with Knies, he’d have the opportunity to attend the full Leafs camp next fall, and if the Leafs aren’t an immediate thing for him (no one should expect that it is) he’ll get the opportunity to play a significant role on the Marlies. A definite upgrade over the NCAA.
Still, if he’s not interested in making this move at this point, the Leafs aren’t really any worse for wear as it is hard to imagine that Knies felt like a possibility for the Leafs this soon back when he was drafted.
Advertisement
Ad
Advertisement
Ad

Matthew Knies with some fancy footwork and slick hands to send fellow #LeafsForever prospect Mikey Koster in for an early scoring chance.

The next player worth talking about here is Michael Koster, who does have two years of experience in the NCAA. Koster has been solid, but streaky, and as a sophomore defenseman he really hasn’t had a chance to play a defining role on his team. It seems far more likely that he’s planning on returning for another NCAA season, and far more likely that the Leafs would steer him in that direction.
The final name worth mentioning with Minnesota is the unrestricted free agent, Hobey Baker candidate, and linemate of Matthew Knies, Ben Meyers. Meyers was an Olympian alongside Abruzzese and Knies, and while it’s very easy to see the Leafs interest in him, it’s a bit tougher to see what Meyers would get out of it besides continuing to play with Knies.
Advertisement
Ad
Advertisement
Ad
The Maple Leafs are fairly limited in what they can promise when it comes to ice time. The roster is looking pretty full, and there are already a number of potential AHLers knocking on the door to fill any vacancies the Leafs might create this offseason. The rumoured interest from Philadelphia and Detroit certainly speaks to teams knowing they can offer the opportunity for ice time. The other thing that others will offer that the Leafs likely won’t is a signing bonus. The Leafs have made it clear the quickest path to the NHL on the Leafs is signing a team-friendly, no bonuses deal and that’s how you get called up. Ben Meyers is likely to be looking at some maxed out entry level contracts, and that could also put Toronto out of contention.
Advertisement
Ad
Advertisement
Ad
It seems the most likely outcome is that there won’t be a MLSE charter flight on its way to Minnesota this weekend, but if it happens, the most likely situation is that Knies has decided that he is ready to make the jump after all.
More from TheLeafsNation.com
POINTSBET IS LIVE IN ONTARIO