Advertisement
Ad
What to expect from Nick Robertson this summer 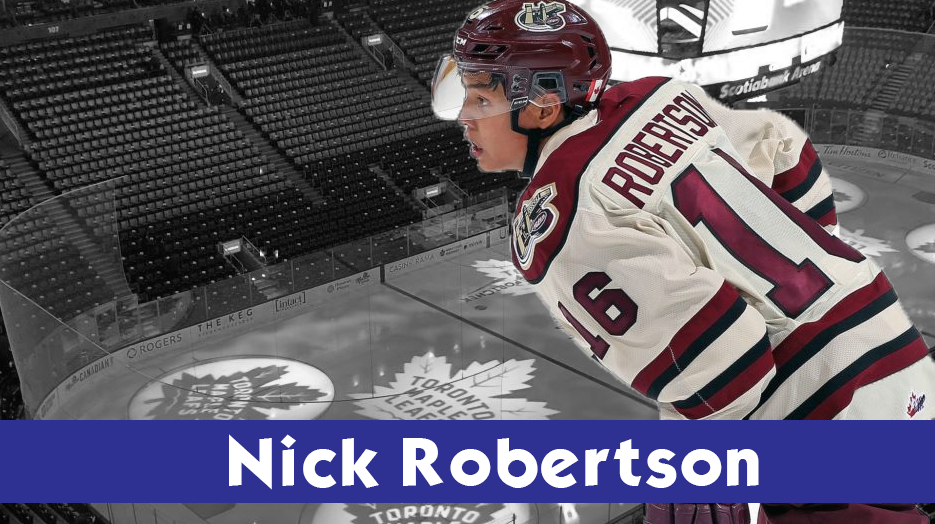 By 51Leafs
2 years ago
Comments
As we all know by now, just over a year ago with their only pick in the 2nd round of the 2019 NHL draft, the Maple Leafs selected undersized, goal-scoring winger Nick Robertson. Robertson was rated as a first round talent by many, myself included, and was considered to be a really good pick at the time by many draft analysts. Fast forward to today, and the teenage Robertson is slated to be joining the big club for the NHL playoffs.
Like many of his biggest supporters, I expected Robertson to have a breakout season, but I don’t think anyone (myself included) saw one of this magnitude on the horizon. Robertson led the OHL in goals this past season, racking up 55 goals and 86 points in just 46 games. He finished fourth in the entire OHL in points per game, beating out every OHLer drafted ahead of him last June (save for Connor McMichael). Robertson also starred at the World Juniors, scoring 5 points in as many games while playing on Team USA’s top line.  This breakout year had led the Leafs to include him on their taxi squad, and this has many fans wondering if the 18-year-old winger could crack the big club’s lineup for the upcoming postseason.

As previously mentioned, Robertson absolutely lit it up this year in the OHL. Taking a look at Robertson’s numbers by looking at more advanced metrics and checking out historical comparables should give us a better idea of his NHL readiness.
Advertisement
Ad
Advertisement
Ad

NHLprospectcenter, an Instagram/Twitter brand that takes a deep look at hockey prospects, constructed a “Projected Points” model which attempts to project how many points a player will score should they play in the NHL next season. It uses factors such as age, position and league to come up with this number. Their model estimates that Nick Robertson would score at a 42 point-pace should he make the Leafs next season, meaning that their model certainly believes that Robertson is ready to be a useful contributor right now. It should be noted that no model is perfect, but NHLpc has been pretty accurate using their model so far, so this is an interesting bit of data to consider.
Advertisement
Ad
Advertisement
Ad
Now let’s take a look at some recent players that had a similar stat line as Nick Robertson and how they did the following season. The chart shown here consists of every OHL player that posted a 1.70 points per game in their 18-year-old season (over the last 10 seasons), and how they fared the next season. To determine what exactly an “18-year-old season” is, I used the age filter on Eliteprospects.com. The players shown here are all either first time-draft eligibles that *just* missed the cut off for being draft eligible in the previous year (Taylor Hall, Matthew Tkachuk) and players that were in their draft+1 but were born between January and the September 15th cutoff. I felt this was a fair sample to use for Nick Robertson as he was a very young D+1 this season, meaning that he is less than a year apart in age from every player on this list when they played their last OHL season. Here are the results:
Of these 8 players not named Nick Robertson, two were returned to junior (Raddysh, Strome), one could not play due to injury (Vilardi), and 5 played in the NHL the following season. These five players accumulated an average of 50 points/82 games (which drops to 46.5 points/82 if you take out Mitch Marner, who probably isn’t a fair comparison to use here – he decimated the OHLin his D+1). These results are pretty consistent with NHLpc’s number, which projected Robertson at 42 points/82 if he plays.
Advertisement
Ad
Advertisement
Ad
After using multiple different methods, the numbers seem to think that if Robertson gets the chance to play, he will be capable of scoring around 45 points over an 82 game season in 2020/21. When you consider that a hockey offseason is usually around 3-5 months, and that by the time the NHL returns to play it’ll have been about four and a half months since Robertson’s season ended, it is probable that his 2020/21 season projections will be just as much of an accurate representation of what he could accomplish in the NHL’s Return to Play as it would’ve been to predict his 2020/21season. Now, there are always outliers and no method is perfect, but putting multiple methods together and factoring in what they all say should result in a sound and likely accurate opinion.
Advertisement
Ad
Advertisement
Ad

Fun fact: Nick Robertson's 1.20 goals-per-game this season was the most we've seen from a U19 OHLer in the last 28 years.

He trails only Eric Lindros (1.24) for most ever in OHL history. https://t.co/b3Wanb1PTm

What We’ve Seen So Far

Of course, you need to do more than just check out the stat sheet when trying to accurately assess the abilities of a prospect. You’ll also need to watch them play. I’ve watched Nick Robertson play a lot of hockey, and here’s what I can tell you about his game:
If Robertson is given the opportunity to score, he’s going to score. His shot is already better than most of the Maple Leafs’ forwards shots. He can score with his wrist shot or one-timer by powering it by a goaltender, or by accurately placing the puck in a corner.

Nick Robertson shot is just disgustingly good. What a steal for the Leafs in 2nd round. pic.twitter.com/edOkaHXVET

He’ll change the speed and the release point of his shot in order to fool goaltenders.

He’ll look pass on a two-on-one and then surprise you with an accurate wrister into the back of the net at the last second. He makes intelligent off-puck reads and understands how to get open so that he can use his big shot. He has tremendous hands and can deke a defenceman or goaltender in a one-one situation. If you play Robertson with smart passers (and the Leafs have a lot of those) at even strength, and if you let him set up at the right circle on the power play, he’s going to score you goals, even at the highest level.
Advertisement
Ad
Advertisement
Ad
Robertson is also an asset in transition. He uses his deception to weave his way through the neutral zone. He’s a patient passer in transition who will delay his pass to open up a lane when necessary. The Leafs don’t have a left winger who can move the puck as well as he can.
Robertson also has an an elite “drive train”, to put it in the words of a former Leafs coach. He won’t be outworked. He is a buzzsaw on the forecheck and backcheck, he isn’t afraid to battle with bigger opponents, and that determination seems to be consistent both on and off the ice:

Team USA head coach Scott Sandelin on #Leafs Nick Robertson “I think he’s came in here and shown us a lot. In the offensive zone he’s got some shiftiness to his game, but I like the fact that he’s on pucks, he wants pucks, and he’s generated some chances because of his work “

The concerns with Robertson in his draft year were that he’s a 5’9 winger who lacked elite speed. Scouts were concerned to see how his game would translate once his surroundings got stronger and faster. While Robertson still is a 5’9 winger who lacks elite speed, from what I saw this year he does look a step quicker than he was last year, he’s never been slow, and because he can score in a number of ways, he’s not the type of player that needs to generate rush chances and breakaways to produce. He’s also had a ton of time to get stronger. I’m not overly concerned about his game translating poorly to professional hockey.
Advertisement
Ad
Advertisement
Ad

How will he do against Columbus?

It will undoubtedly be hard for Nick Robertson to crack Toronto’s lineup seeing as he’s a teenager who is yet to play in an NHL game, but he has been named to the postseason roster for a reason, and the expectation is that he is going to be given every opportunity to crack the lineup.
There are a couple factors that work in Robertson’s favour. For one, he is a left winger, which is definitely the Leafs’ biggest positional weakness up front. As of right now, the Leafs have Zach Hyman, Ilya Mikheyev, Pierre Engvall, and Kyle Clifford locked in as regular LW’s. Andreas Johnsson, who would likely be playing in a top-6 role on the left side if healthy, seems like he will not be ready to return from injury yet. Yegor Korshkov, Denis Malgin, Nic Petan, Kenny Agostino, Frederik Gauthier, and Adam Brooks are also expected to be with the team, but all serve primarily as depth forwards, and only Malgin and Agostino are primarily left-wingers.
Advertisement
Ad
Advertisement
Ad
Also, it must be considered that Clifford and Hyman have shown the ability to play right wing in the past, and Pierre Engvall has experience at all three forward positions. Robertson is going to have to win his spot, but it’s not an impossibility.
Theoretically, the Leafs could run something that looks like this:
Hyman-Matthews-Nylander
Robertson-Tavares-Marner
Mikheyev-Kerfoot-Kapanen
Engvall-Spezza-Clifford
Extras: Gauthier, Korshkov, Malgin, Brooks, Petan, Agostino
IR: Johnsson
You could switch Robertson and Mikheyev if you’d prefer the experience of Mikheyev over the teenage Robertson, but either way you look at it, Robertson really only has to beat out the group of Marlies + Gauthier and Malgin for a forward spot, and Pierre Engvall for a top-9 spot.
Robertson also adds the dynamic of a one-timer option to whichever power play unit he plays on, which is something that the Leafs don’t have in any of their other forwards. This could add a new-look to the Leafs’ man advantage, and would throw a wrench into any film work done by the Blue Jackets on Toronto’s power play.
Advertisement
Ad
Advertisement
Ad
To wrap this section up, it’s impossible to predict exactly how well Robertson will do against Columbus seeing as he’s never played an NHL game, and he’s not a lock to even play in this series, but he definitely has a case to be included in the lineup, and I think he could be a very nice addition to the lineup if he earns it and that’s the route the Leafs decide to take.

It’s tough to have any sort of expectations for Robertson at the moment. Nobody should be placing high expectations on the kid as of right now. With that being said, though, he has the potential to be an exciting wild-card for the Leafs, and he should be a ton of fun to watch in camp. He’s a 19-year-old kid with the chance to go out there and live his dream, and he’s got the talent and the work ethic to make it happen, so I’m sure he’ll bring his A-game to camp, and we can all sit back and root for him to have success. He has the potential to become a really important part of Toronto’s future, and whether the future is this August or not, this is certainly a player the Leafs and their fans should be thrilled with.
Advertisement
Ad
Advertisement
Ad