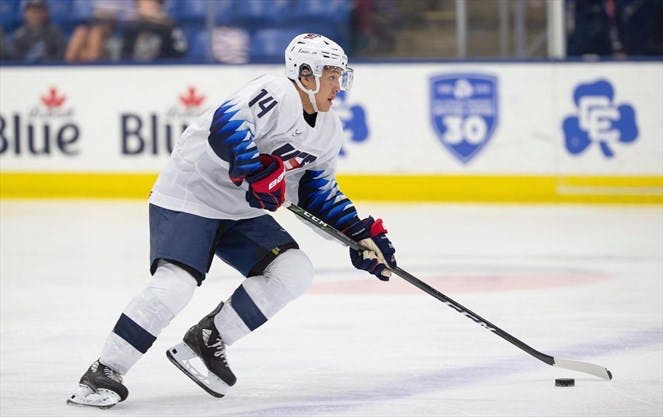 Photo credit: USA Hockey
By 51Leafs
3 years ago
Comments
This year’s World Junior Championship is underway and three Leafs prospects took the ice on Thursday afternoon in their first games of the tournament.
One of those prospects was 2019 second-round pick, Nicholas Robertson. The 18-year-old forward and his American teammates faced off against Team Canada in a high-event Boxing Day matchup.
Robertson started the tournament on the first line, to the left of Senators prospect Shane Pinto and Islanders first-rounder Oliver Wahlstrom. He was also deployed on the team’s top power-play unit. Team USA’s coaching staff seem to be high on Robertson, and for good reason – all he has done in the OHL this season, at the Summer Showcase this past summer, and in the recent pre-tournament games is work hard and score goals.
Thursday afternoon’s matchup against the Canadians was no different.
While Robertson did get off to a bit of a quiet start, the Leafs prospect and his linemates improved as the game progressed. As he typically does, Robertson made smart decisions with the puck, provided energy away from it, and eventually put up a couple of points.
Advertisement
Ad
Advertisement
Ad
Here are a few standout plays from his game:

Nick Robertson (TOR) is so smart with the puck. Rushes up and sees a wall of defensemen. Instead of trying to burst through, he drops back to neutral zone and delivers a cross ice pass to the left side in an attempt to create another rush. #LeafsForever #WorldJuniors2020 pic.twitter.com/ABTg6QX38i

If you’ve watched much Leafs hockey since Sheldon Keefe has taken over, this is the type of play you’ve become familiar with. Robertson doesn’t force anything, and instead of throwing the puck away, he regroups and attempts to create another opportunity for a controlled entry. This is the type of stuff that helps drive puck possession.
Before eventually scoring an Auston Matthews-esque snipe, Robertson had another high-quality scoring chance that he nearly put home:

And now, the fun stuff. Here’s that goal I was talking about:

Robertson curls the puck around Senators prospect Jacob Bernard-Docker’s stick and fires the puck through his legs (and past Nico Daws). Fantastic shot. Canadian head coach Dale Hunter had this to say about it post-game:
Advertisement
Ad
Advertisement
Ad

Robertson didn’t stop there. Later that period he connected with Senators prospect Shane Pinto for a power-play goal, sneaking a pass across the crease and under Bernard-Docker’s leg. I’m sure Leafs fans are hoping all of Robertson and Bernard-Docker’s future matchups go similarly to how they went this game.

If you don’t want to believe my eye-test or the box score, the analytics also show that Robertson was quite good in this matchup against Team Canada. Twitter user @oliviaylin tracked zone exits, zone entries, and shot assist, and they too show that Robertson had a nice game:

USA Exits and Entries at 5v5:

USA could really use more defensemen who can break the puck out with control better.
Robertson-Pinto-Wahlstorom line looking good in terms of zone exits (Pinto) and entries (Wahlstrom and Robertson) too! #USAWJC pic.twitter.com/4bmyMOa1Jc

Robertson also had the second-best Game Score of all Americans players:

Overall, it is definitely safe to say that Robertson had a very good game against a Gold Medal contender, which is extremely encouraging for Leafs fans and Team USA. The Americans hope to get back on the right track on Friday against Germany.
Advertisement
Ad
Advertisement
Ad