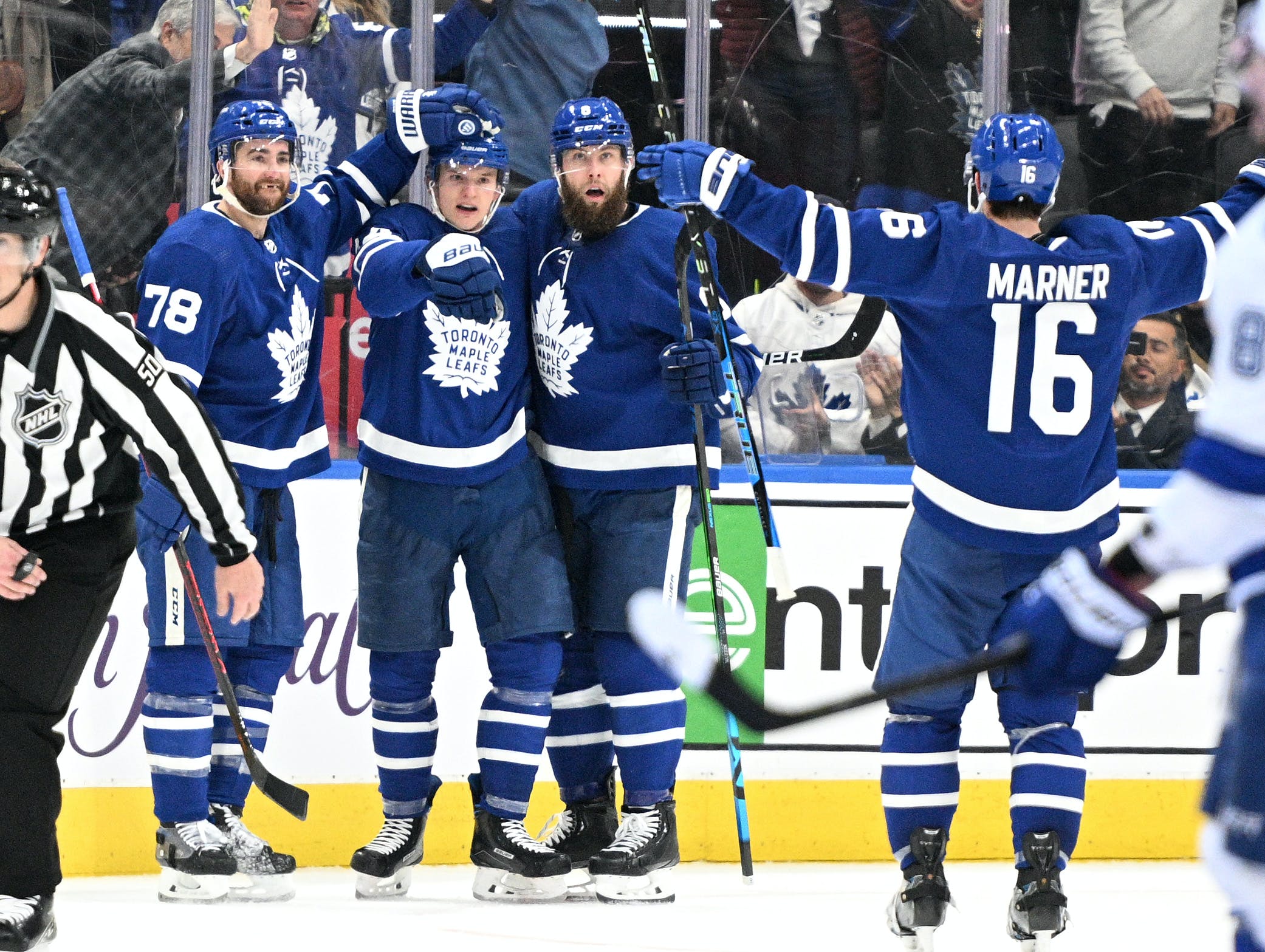 By Kyle Cushman
6 months ago
Game 1 went about as perfect as anyone could have hoped for the Toronto Maple Leafs. Not only did they record a decisive 5-0 victory, but @Auston Matthews and @Mitch Marner got on the scoresheet after disappointing postseasons a year ago, the home crowd was incredible, and they appear to have gotten out of the game without any injuries.
With as successful a Game 1 as it was, it would be tough to fault Sheldon Keefe for running it back for Game 2. And if the 18 skaters that were dressed for Game 1 were Toronto’s best, I would imagine that’s exactly what we would see.
The only issue is that @Michael Bunting was not part of that Game 1 squad and though his status for Game 2 remains up in the air, as soon as he is ready he’ll be back in the lineup. If that comes in time for Wednesday’s Game 2, then some tough decisions are ahead for the Maple Leafs.
So what could/should they change?

How a Michael Bunting return impacts the rest of the lineup

If Bunting is available, you would imagine he’ll slot in on the left wing with Matthews and Marner as he has for essentially the entire second half of the season. Though I wouldn’t hate trying a second line featuring Bunting with @John Tavares and @Ondrej Kase, the Bunting-Matthews-Marner line has been fantastic and going away from that feels like you’re overthinking things.
A Bunting return would bump @Alexander Kerfoot from his current spot. Kerfoot looked great in Game 1 and coming off of a superb performance in the 2021 playoffs, “Playoff Kerfoot” is quickly becoming a thing. Where he slides in with a Bunting return is fascinating given how the lineup was organized for Game 1.
If Keefe moves around all of the lines and re-unites John Tavares and @William Nylander, Kerfoot could easily slot in on the left wing as he did quite often during the regular season. That being said, I would be surprised to see that drastic of a lineup change following a 5-0 win.
A spot alongside Nylander would make a lot of sense given their chemistry in 2021 against Montreal. Nylander lined up with @David Kampf and @Pierre Engvall on a third line that dominated their ice-time in Game 1. Bumping Kampf to the 4C position to play Kerfoot with Nylander on the third line would result in a bit of an awkward fourth line but could maximize the offensive contributions you are getting from Nylander despite his lower role in the lineup.
There’s also one of the two positions on the second line with John Tavares for Kerfoot to potentially land. Ondrej Kase is just returning from injury and a spot lower in the lineup could suit him better as he gets back up to game speed. This would give Tavares two speedy wingers in @Ilya Mikheyev and Kerfoot to chase down pucks and help in transition.
If Keefe keeps the top nine as constructed with the exception of the addition of Michael Bunting, then Kerfoot could be bumped all the way down to the fourth line. Kerfoot’s played there at times during the season and would provide excellent depth, but a spot that low in the lineup would lack ice-time for him, especially after his strong showing in Game 1.

Speaking of the fourth line, if Michael Bunting is not available, the only area to really look at changing is the fourth line. @Kyle Clifford’s ejection early in the first period resulted in a fair bit of line mixing, but the top nine were effective as constructed for Game 1. The same can be said for the defence.
Sheldon Keefe praised Clifford’s efforts in the regular season while acknowledging his hit on @Ross Colton was not good following Game 1. The way Keefe spoke, it seems like Clifford will get back in the lineup, but he could have his hand forced if Clifford receives any supplementary discipline.
While one of Clifford or @Wayne Simmonds seems destined to feature in the Leafs lineup for the entire series, dressing both is too redundant. Having @Jason Spezza sit in the press box as a healthy scratch for Game 1 was a fine move to “set the tone” for the series, but Keefe has to get him involved. Spezza was a huge positive for the Leafs last year, scoring five points against Montreal, and while he hasn’t been as good overall in 2021/22, still provides a lot of value as a depth scorer and a spark on PP2.
In a scenario without Bunting, Spezza for Clifford in Game 2 should be an easy call. A Bunting return, however, and Spezza getting in the lineup gets a whole lot trickier. Assuming Clifford is the one to come out of the lineup for Bunting, that means one of Wayne Simmonds or @Colin Blackwell would have to be scratched to make room for Spezza.
Blackwell shouldn’t be a consideration to take out as if any top nine injuries occur, he’s an easy choice to move up the lineup. He also chips in on both special team units. Taking Simmonds out, given the physicality he brings, would also be a tough choice given Keefe’s comments and how Game 1 played out.

How do the Leafs forwards lineup for Game 2?

For a team coming off of a 5-0 win, there usually aren’t lineup decisions that really make you think. But with Michael Bunting looking to get back in when ready and Jason Spezza sitting in the press box, some tough calls will have to be made by Sheldon Keefe tomorrow for Game 2.
If Bunting remains unavailable, a swap of Spezza for Clifford would be the straightforward call to me. Here’s what I think Sheldon Keefe and the Maple Leafs will go with if Bunting is available for Game 2:
It was maximized due to Kyle Clifford’s absence, but we saw lots of different looks during Game 1. Whether Michael Bunting is back or not, expect to see lots of that yet again for Game 2 as the Leafs look to keep Tampa Bay on the ropes.
More from TheLeafsNation.com
POINTSBET IS LIVE IN ONTARIO