Around the NHL: A Missed Opportunity for the Kraken 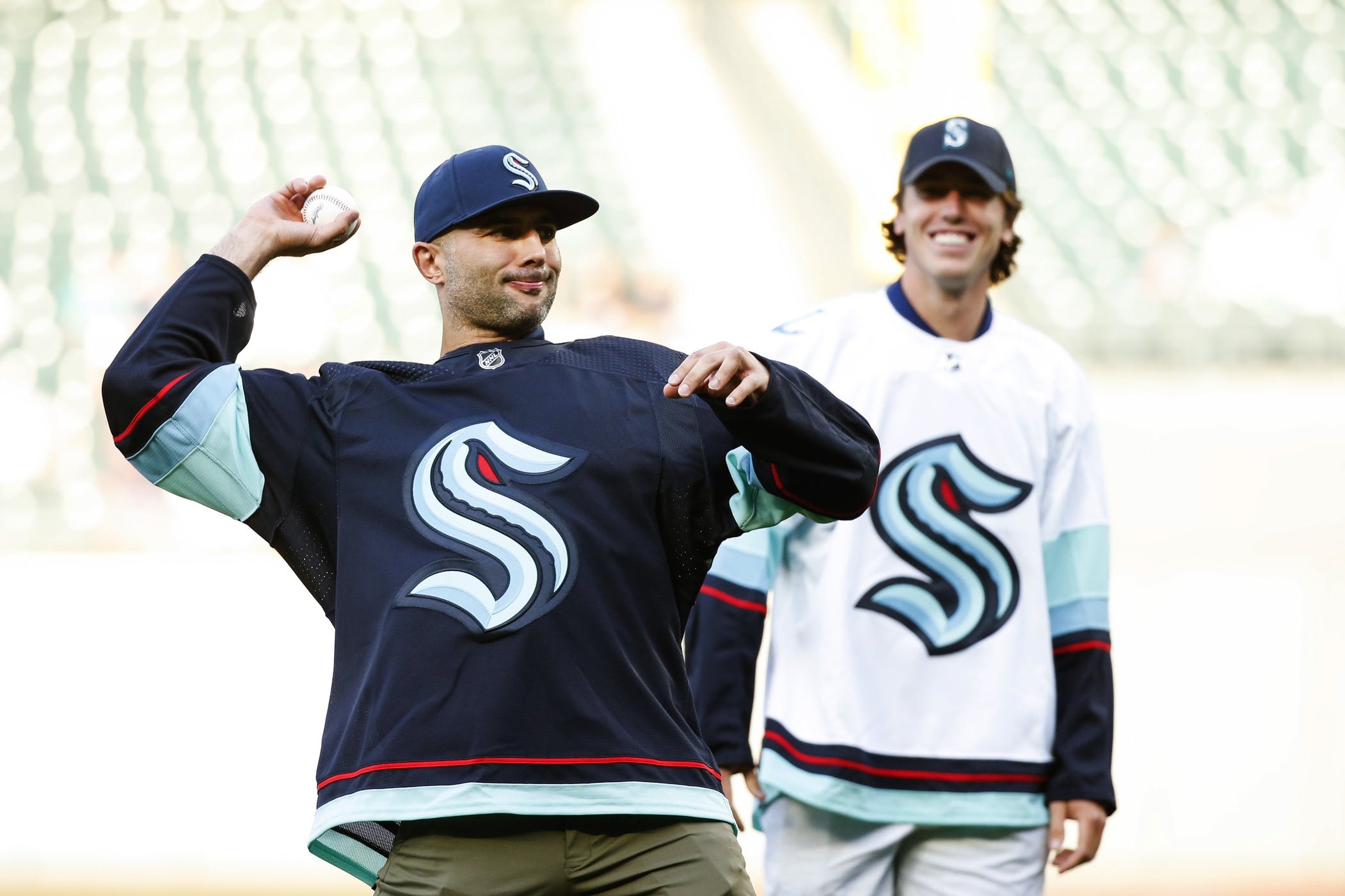 By Scott Maxwell
1 year ago
Another expansion draft has come and went, and much like the Vegas Golden Knights expansion draft, a lot of fans left it underwhelmed, especially with the really good players left unprotected by other teams.
That said, there’s a big difference between the underwhelming picks by Vegas, and the underwhelming picks by Seattle. With Vegas, a lot of fans failed to consider how some players would excel in new roles. William Karlsson was an anomaly, but even Reilly Smith, Nate Schmidt, and Colin Miller excelled in larger roles when they were analytics darlings in lesser roles on worse teams. That’s not to say Seattle didn’t do that either (more on that in a bit), but there’s a bit less upside to their picks.
Also, Vegas’ expansion draft didn’t get quite have the impact on the team that you might think still. Of their 30 selections in 2017, only six players remain on the team, and two of them (William Carrier and Tomas Nosek) are bottom six forwards. Vegas made a bigger impact in the expansion draft through side deals and expanding their draft capital, creating the contender they are today.
Granted, Seattle clearly has an identity they’re trying to go for. They want to be a group of loveable guys who work hard, and believe in a strong team environment. That said, it’s clearly taken inspiration from the recent runs of the Montreal Canadiens, New York Islanders, and Dallas Stars, a formula that can get you far if you get lucky, but not win it. Sure, Tampa Bay had elements of that as well, but they also had loads of skill on those teams, something the Kraken do not.
Now, I’m going to put this caveat before I start my deep dive: I’m not saying the Kraken aren’t going to be competitive next year. They have a relatively competitive team, and they’ll be in a division that consists of Vegas and not much else, so they don’t even need to be good to make the playoffs next year. It’s not unlikely they make it, but they definitely could have done things differently.

Didn’t bring in a ton of high end talent

Nino Neiderreiter. Max Domi. Ben Bishop. Troy Stecher. Carey Price. Matt Duchene. Ryan Johansen. P.K. Subban. Evgenii Dadonov. James van Riemsdyk. Jakub Voracek. Marcus Pettersson. Vladimir Tarasenko. Braden Holtby. Nick Jensen. Dylan DeMelo. Seattle could have had most of those names and formed a pretty decent team.
Now, I’ll cut them some slack. Not all of those names are as good as they used to be, but some of the ones that aren’t are still marketable names, which is important for a new franchise. Also, a lot of these come at high cap hits, and in a flat cap era, cap space is super important, and it was smart to not strap the team for cash right off the hop, considering a lot of teams will be paying a high premium to get rid of bad contracts.
But, ignoring some of these names were questionable, especially with who they ended up picking from their team. Domi, while not the player that broke out in Montreal, is still a solid player, especially if you gave him a top six role (which he would have on that team), and much better than Gavin Bayreuther, who is 27, a UFA, and probably not going to make the NHL. van Riemsdyk is coming off a 62 point pace season, and while he comes at a high cap hit, is up after two seasons, and is better than Twarynski. Pettersson and DeMelo are really underrated top four defenseman, and would’ve played really well on their team as opposed to the middling forwards Seattle picked in Tanev and Appleton.
I’ll give them credit where it’s due though. Passing up on Tarasenko, who could’ve had some high upside as their top scorer, for Vince Dunn was still a smart move considering Dunn’s been underused in St. Louis for years, and as chaotic as it would’ve been seeing Price in a Kraken jersey, they didn’t bite on a 13 game sample size in the playoffs to take on a terrible contract. But, there was still some missed potential to add some offensive talent, when their best established bets are Jordan Eberle and Yanni Gourde up front, and Mark Giordano on the back end.

Didn’t quite go for high ceiling picks either

On the flip side, they didn’t really optimize the roster to go for players with unknown high ceilings to excel in bigger roles.
That’s not to say that they don’t have those options available. The aforementioned Dunn will probably do great in a bigger role, as will Jared McCann and the Fleury brothers.
The bigger issue is that they probably won’t get those opportunities to get to that ceiling. On top of Giordano, the Kraken added Oleksiak and Larsson, who are fine players and will do well in a top four role, but won’t bring much beyond that, and up front they brought in a ton of middle six two way forwards who more or less plug up the top six before they even get to the younger guys.
Now, the rules of the expansion draft did make it hard to go this route because the minimum amount of professional experience basically meant Seattle was getting 23 and 24 year olds who don’t have a whole lot more potential. But, there were still some decent options available like Jake Bean, Jake McCabe, and Carl Grundstrom who could’ve excelled in larger roles.
There was also another way they could’ve added a bit more youth…

Didn’t capitalize on side deals or dealing players (yet)

What’s amazing about this expansion draft is that on top of all the average players the Kraken elected to take, we also learned that they weren’t forced to take these players for a price. Not a single team made a deal with Seattle to stay away from this player or that player, they just picked a bunch of mediocre players when they had better options.
Part of that is that Seattle put the market prices too high, and when a lot of GMs seemed to learn from their mistakes last time, it was an adjustment the Kraken failed to make. Some of the reported prices were supposedly a first and a third if the Flames wanted to ensure they didn’t take Giordano, or multiple firsts if a team wanted to claim a player from another team and trade them to them. Sure, don’t knock the prices all the way down, but at least soften them a bit so more teams will consider it.
A big reason why the Golden Knights did as well as they did was through those side deals. It not only had teams give them good prospects or top six forwards like Rielly Smith, Shea Theordore, or Alex Tuch (which in the case of Smith and Tuch, was to take Marchessault and Haula, who were also useful for Vegas), but also gave them a ton of draft capital, as they got nine additional picks over the next three seasons, including two firsts, and four seconds. That allowed them to not only have a young, successful team right away, but also gave them the ability to stock the prospect pool quickly, which would be useful when bringing in players like Max Pacioretty and Mark Stone.
Now, the verdict’s not out on the additional deals for Seattle just yet, as the window has only been open for a day and they’ve only made one deal at the time of writing this article (Pitlick to Calgary for a fourth). The draft and free agency are still ahead, so there’s still plenty of time to make deals, but considering that the biggest names with value for Seattle were the ones they trotted out in jerseys on Wednesday night, it’s hard to see them getting any big picks or prospects out of this.

Now, just because this team doesn’t have a ton of high end offensive or youthful upside doesn’t mean this team isn’t doomed. We’ve seen a few teams in the last few years excel despite a lack of high end talent, the most notable being the New York Islanders, and the magnificent work that Barry Trotz has done to make the most out of that team.
We also saw it with Gerard Gallant when he started as the Vegas Golden Knights in 2017-18. He did a great job of not only implementing a system for the players to thrive in, he also gave opportunities to players who had never had them, which saw them thrive and create that storybook run to the Finals (Fleury playing out of his mind also helped).
I just don’t have a ton of faith that Hakstol will be able to do that with this group. In his three full seasons with the Flyers as the head coach, they were 18th in even strength shot attempt shares with 50.23% and 20th in expected goals share with 49.32%, although in the 31 games leading to his firing in the 2018-19, they were 13th and 11th in those regards with 50.07% and 52.11%.
His time as an assistant coach in Toronto doesn’t suggest he’ll be too high on giving ice time to high upside players either, as he more often than not went with the “safe” options in Justin Holl (who admittedly wasn’t a known safe option at the time), and Cody Ceci instead of younger options in Travis Dermott and Rasmus Sandin.
I’m not saying Hakstol is doomed, but nothing about him really screams that he’s going to bring the absolute best out of this team like Gallant did with Vegas in 2017-18.
Of course, there’s still plenty of offseason left for the Kraken to make a big impression. They still have $30 million in cap space, and are looking at a free agency class that has some promising options, particularly Dougie Hamilton and Gabriel Landeskog. But, there’s also a ton of red flags, like Zach Hyman, Blake Coleman, Barclay Goodrow (who is already signed, but proves my point still), Alec Martinez, and more, all players who thrived in a certain environment, and likely won’t be the same in a new one. Considering the free agents they’ve already gone after in Oleksiak and Larsson, and the pricey deals they gave them, I don’t have a ton of faith in them just yet.
If they can navigate that well, and bring in some more draft picks, they could save themselves a bit, but this expansion draft doesn’t have the highest promise for success, unless they’re doing a really good stealth tank job, which with Shane Wright being the prize, isn’t the worst strategy either.
In case you can’t tell, I’m still a bit confused as to what their game plan is here. They could very well prove me wrong, especially because of the randomness that is the sport of hockey, but it still feels like a missed opportunity to do even better so far.
Uncategorized
Recent articles from Scott Maxwell