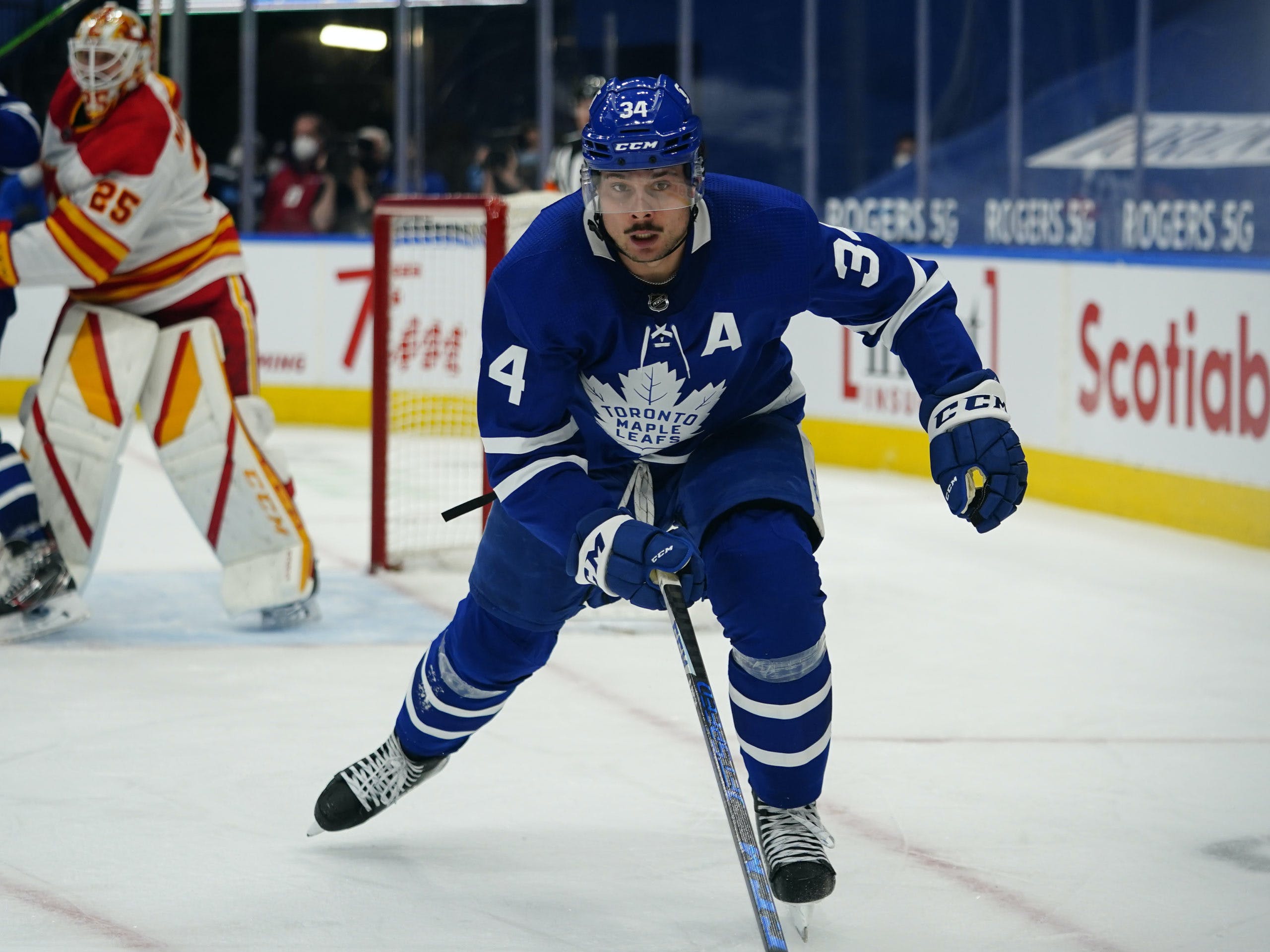 By Joseph Zita
1 year ago
After being drafted first overall by the Toronto Maple Leafs back in the 2016 NHL Draft, Auston Matthews has done more than just live to the hype of being the first overall selection in that draft, he’s put his name in the conversation as arguably a top-three player in the NHL today in some peoples eyes. If not top-three, then he’s more than certainly a top-five player in the NHL today in most people’s opinions with how this season has gone and especially his season last year too.
Matthews stepped onto the scene in the NHL right away and with that, he made a massive impact scoring four goals in his NHL debut against the Ottawa Senators as a 19-year-old who just turned 19 not even a month ago at the time. It was in that game, that first game of the 2016-17 regular season that all of Leafs Nation knew that Auston Matthews was a special player and that he was going to be dominating the league very, very soon.
Well fast forward to this season, his fifth year in the NHL, Auston Matthews has quickly become the league’s best goal scorer, yes you read that right. The league’s best goal scorer. Step aside Alex Ovechkin, Auston Matthews statistically has been the better goal scorer since entering the league five years ago. Now some may say it is still Ovechkin right now, and I mean you could possibly make a case for that. However, once we take a deep dive into the stats it may change your mind about that.

Before we take a dive into Auston Matthews’ career so far, I want to talk about this season in particular because of how dangerous and lethal he has become on the ice against teams. This season through 48 games played (missed four due to injury) he has an outrageous 39 goals to his name and has also tallied a pretty solid 24 assists as well which puts him at a total of 63 points in 48 games which sits him first in goals and sixth in league scoring, only behind none other than Connor McDavid (93), Leon Draisaitl (75), Nathan MacKinnon (65), teammate Mitch Marner (64) and Patrick Kane (64).
This season has really shown that both Auston Matthews and Mitch Marner have taken another step in their young careers and only continue to get better and better as the seasons go by. It sucks that this season is a shortened one because both guys would be on a ridiculous pace to end the season if it was an 82 game campaign.
Matthews: 39 goals – 24 assists – 63 points on pace for 63 goals and 102 points in an 82 game season
Marner: 18 goals – 46 assists – 64 points on pace for 28 goals and 101 points in an 82 game season
Let’s get back to Matthews and his goals right now because as of the evening of May 4th, 2021, Auston Matthews is at a 0.81 goal/game played rate, which puts him around some very elite company for a single season scoring rate.
According to Elliotte Friedman in his 31 Thoughts article, the only players in NHL history with a higher season goal/games played rate than Matthews’ 0.81 right now is Mike Bossy, Phil Esposito, Wayne Gretzky, Brett Hull, Jari Kurri, Mario Lemieux, Lanny McDonald, Alexander Mogilny, Came Neely, Bernie Nicholls, Maurice Richard, Teemu Selanne, and Charlie Simmer.
That just goes to show how historic of a season Matthews is currently having in a shortened, COVID-19 pandemic NHL season where he missed four games due to his wrist injury and has also played the majority of the season with it nagging him too.

Matthews is the best goal scorer in the NHL

So after taking a look at these four charts of their total goals, even-strength goals, power-play goals and their G/GP, it’s pretty darn close with these two guys but Auston Matthews clearly has the edge with the fewer games played through the five-year span. Although I got to give it to Ovechkin at being the better power-play goal scorer as he has that wicked one-timer from his office on the power-play and it seems like everyone knows it’s coming, yet you can never stop it.
For Auston Matthews, it’s his elite play at even-strength that makes him so dangerous. He doesn’t need to be on the power-play to score a ton of goals, he can do it at even-strength with his laser of a release that just like Ovechkin’s one-timer, you know his shot is coming, yet goalies are rarely able to stop it once he curls and drags the puck like that.
Us hockey fans, and especially Toronto Maple Leafs fans are so lucky to be witnessing the type of season Matthews is currently having goal-scoring-wise and just all in all witnessing his career unfold in front of us as well. As a 23-year-old almost at 200 career goals already with only 330 career games under his belt is insane.
Content
Recent articles from Joseph Zita