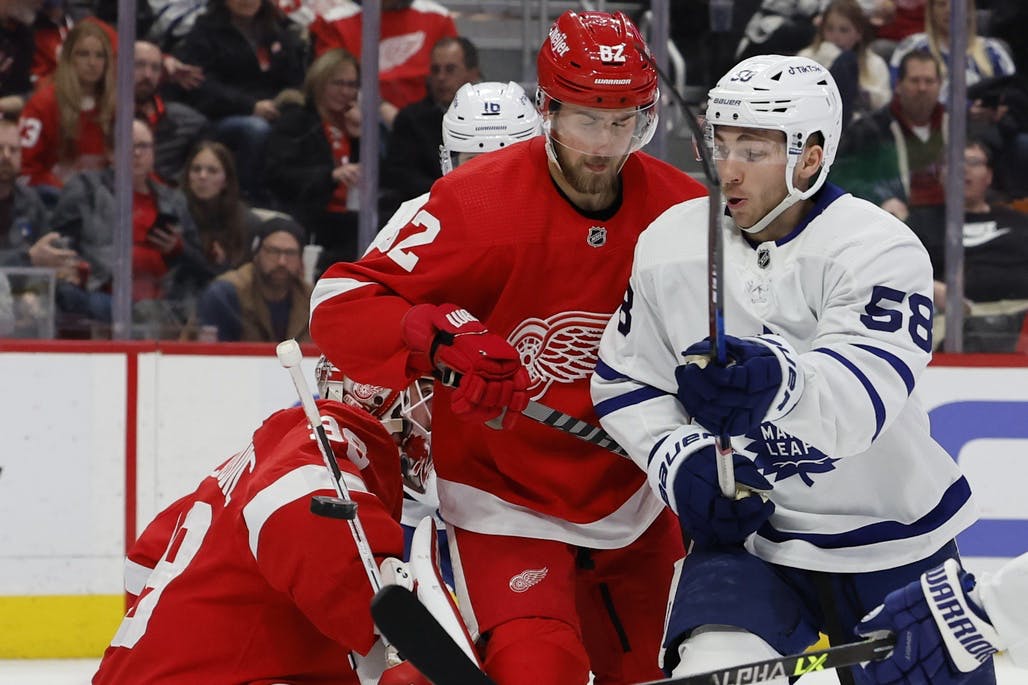 Photo credit:Rick Osentoski-USA TODAY Sports
11 months ago
DETROIT — Michael Bunting had to scrap and claw for every inch to live his NHL dream.
So when the chips were down and the Toronto Maple Leafs found themselves down by a pair of goals to a Detroit Red Wings team that they were heavily favoured to beat, Bunting led the charge with his second-career hat trick and first for his new club in a 7-4 victory.
“It was a fun night to be a part of,” Bunting said. “The comeback and then getting that win makes it even sweeter to be able to get a hat trick tonight.”
The Maple Leafs got off to a rough start against the Red Wings. Down 3-1 in the second period, the Leafs managed to fight their way back and Toronto’s next three goals came from Bunting. Two of them came off deflections.
Bunting’s first goal occurred when he batted down Justin Holl’s shot from the point. He also managed to keep his stick down below the bar to prevent his goal from being disallowed.
In the third period with the Leafs down 4-2, Bunting spun around to bat down a puck for his second deflected goal.
Bunting helped his club erase the two-goal deficit by skating to the net as he awaited a feed from linemate Mitch Marner (yes Marner, more on that later) to beat Red Wings goaltender Alex Nedeljokic to tie the game 4-4.
From there, the Maple Leafs scored another when Rasmus Sandin gave the Leafs the go-ahead goal with 2:51 remaining in regulation time. Mitch Marner extended his goal-scoring streak to a career-high five games with an empty-net, power-play goal and John Tavares scored the team’s second empty-netter that made it a 7-4.
But this game had all the makings of a disaster for Toronto.
No stranger to losing games to teams they should beat, the Red Wings were playing on the second night of back-to-back nights after they defeated the Pittsburgh Penguins in a shootout on Friday night. The well-rested Maple Leafs looked out of sync as they tried their new-look lines that helped them defeat the Anaheim Ducks on Wednesday.
But nothing clicked early on. Passes were broken. Their defence looked out of sorts.
With the Leafs down 3-1 in the second period, Maple Leafs coach Sheldon Keefe gathered everyone on the bench to deliver a speech during the first television timeout.
“We weren’t defending properly, we were giving up clean looks around our net and we were sloppy with the puck,” Keefe said. “We needed to clean our game up and we had to play a lot better and a lot more urgency, that was the message.”
Keefe repeatedly used the term “stop the bleeding, defensively” in his post-game insisting that he felt the club would erase the deficit had they fixed the issues in their own end.
When they figured out how to do that in the third period, they Leafs chipped away and Bunting led the charge. After the Leafs surrender their fourth goal of the night, Keefe reverted back to the original lines they had with William Nylander back in a top-six role and Marner back on the first line with Bunting and Auston Matthews.
When he wasn’t scoring Bunting was being his usually pesky self.
After he was taken down by Detroit Moritz Seider, Toronto’s Travis Dermott and Detroit’s Vladislav Namestnikov were involved in a scrum. Bunting skated to Dermott’s defence and also exchanged words with Detroit’s Dylan Larkin.
“All that crap at the end of the second period in and around their net after the buzzer, you know, that’s Bunts being engaged, being involved,” Keefe said of Bunting.
He was raised by a single mother who survived breast cancer. He never had the privilege of buying brand new equipment as a kid and when he made it to the pros, he had to wait several years before he finally got a chance with the Arizona Coyotes last season.
It was only fitting on Hockey Day in Canada from Scarborough, that the local kid who had to fight for every inch helped dig his team out of what could have otherwise been an embarrassing hole.
Signed to a two-year, $1.9 million contract last summer, Bunting is proving to be that piece of resiliency that the Leafs have been missing all of the years.
“Fitting that Bunts comes through like that,” Keefe said of the occasion. “Terrific to see for a guy just competes out there.”
—
The game itself can’t be summed up by periods, but rather stretches.
The Leafs looked out of sorts for much of the first period. Although Mrazek had some goals go in that he wanted to have back, he made some timely stops when they needed him.
After he allowed the first goal of the game on Detroit’s first shot, Mrazek made the next 14 saves, many of them of the high-danger variety.
When the Leafs tied the game 4-4, they gave up a huge chance immediately to Detroit’s Lucas Raymond. Mrazek stopped the breakaway.
Sandin’s game-winner was his first of the season. He became the last everyday player on the Leafs to score a goal this season. Toronto’s defence looked terrible in the first two periods. Uncharacteristically bad plays from TJ Brodie and others were righted once the team bucked down in the third period.
News
Uncategorized