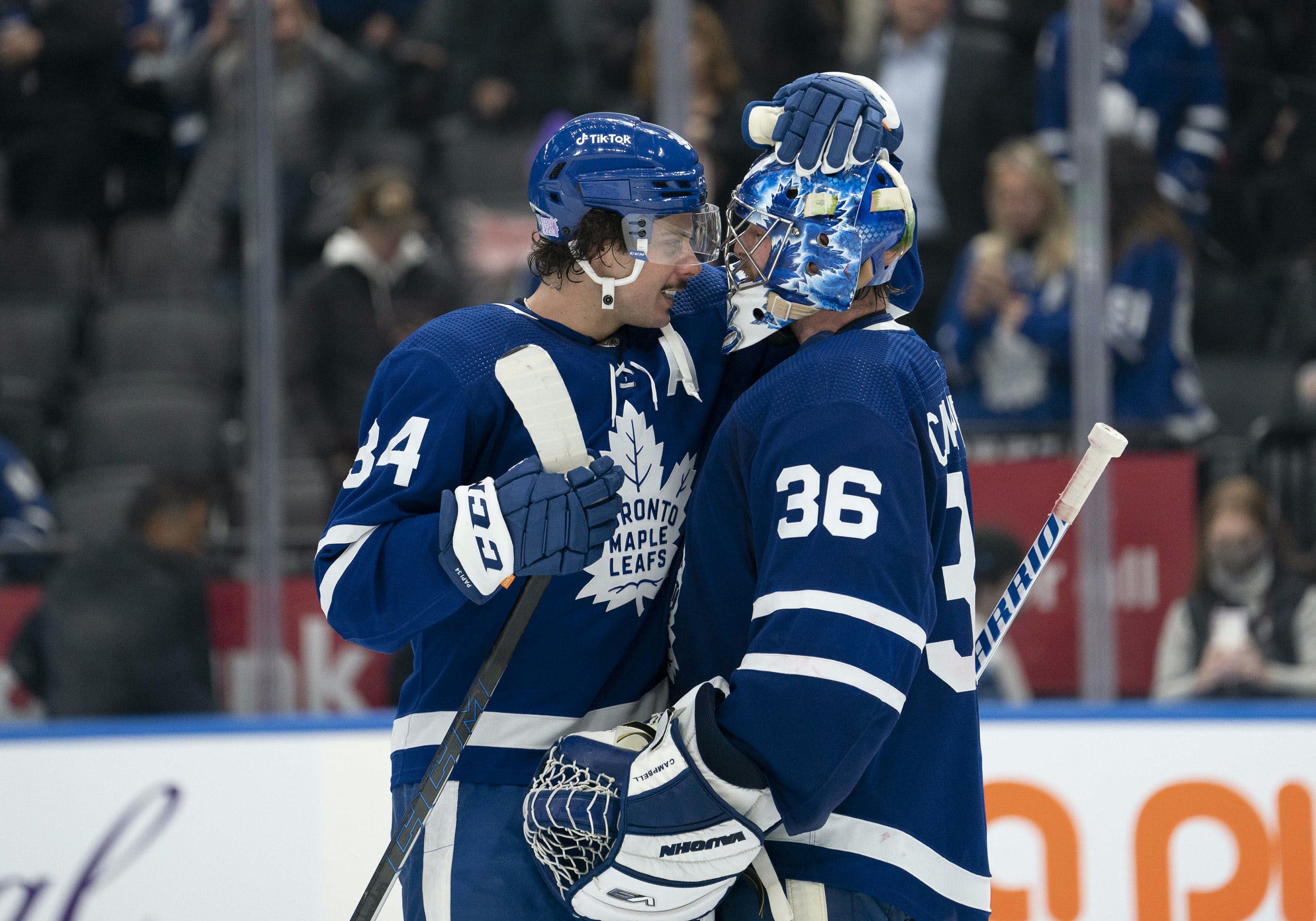 By Joseph Zita
1 year ago
After coming off a back-to-back on the weekend against the Calgary Flames and the Buffalo Sabres where they picked up four out of the possible four points, the Toronto Maple Leafs were back in action tonight hosting the Nashville Predators for the first time in quite a while. These two teams were set to play one another on March 12, 2020, just one day after the NHL season, along with basically every other spot in the world shut down due to COVID.
There were some lineup changes ahead of tonight’s game, including Wayne Simmonds and Rasmus Sandin inserted back in the lineup for Kirill Semyonov and Timothy Liljegren. The first period was a great period for the Maple Leafs. They had a lot of quality scoring chances, got a couple of power-plays – they even scored on one – and just all-around outplayed the Predators in the first 20 minutes.
The second period pretty much started how the majority of the first period went for the Maple Leafs. They continued to apply a lot of pressure on the Predators and hemmed them in their own zone for a couple of shifts in a row but couldn’t seem to score any of their chances in the first ten minutes. They got another chance on the power-play towards the end of the second period, but couldn’t seem to set up and they ended the second frame the same way they entered it.
The Maple Leafs kind of started the third period without the same energy as the first two in my opinion. They allowed the Predators in their own end early on and they took advantage of that and created some chances but couldn’t find the back of the net. However, the Maple Leafs started to play the same game they did throughout the first 40 minutes soon after that and continued to have scoring chances throughout the period and they ended up finding the back of the net late in the game with a Kampf goal.

Right out of the gate in the first period, the third line of Engvall – Kampf – Kase generated some scoring chances early on and they did that throughout the night whenever they were on the ice together. A line that is initially looked at as a defense-first line and a line that gets more of the defensive zone face-offs rather than the offensive zone face-offs, the line has actually had their chances throughout the season so far offensively and they did it again tonight. I think everybody knows that Kampf and Kase have been a tremendous duo for this Maple Leafs team on both ends of the puck and they did it again late in the third period as Kase was hard on the forecheck, outmuscled the defenceman in the corner, and eventually spun around and fed Kampf for a shot that beat Saros on the far side and it gave Toronto a 2-0 lead late in the third period.

The soup is even hotter right now as Jack Campbell stood on his head yet again in a game this season and earned himself his ninth win along with his third shutout of the year in his 100th career game. He really didn’t get tested early on in the game, and even throughout half the game either to be honest as the Toronto Maple Leafs just simply outplayed the Nashville Predators in every zone on the ice. However, in the third period, the shots were closer and Nashville did create some scoring chances, but Campbell was obviously there to answer them and turn them all aside to keep the game at a one-goal lead at the time. As I said, this is Campbell’s third shutout of the season, but this is also his second shutout in the last three games as he also blanked the Flyers on the road. Not that long ago, he earned the NHL’s first star of the week by going 3-0-0 and having amazing numbers. He followed that up with a disappointing game against the Kings losing 5-1, but he has now followed that loss up by going 3-0-0 in his last three starts as I said.

For someone who missed the first three games of the season due to off-season wrist surgery, Auston Matthews has looked like himself over the past handful of weeks after the core four were having trouble scoring at the beginning of the season. Tonight, he continued that and scored yet another goal as well as adding another assist to grab his fifth multi-point game of the season as he scored a nice goal on the power-play from a cross-seam pass from Nylander and his assist was on the empty-net goal from Marner that sealed the deal late in the third period to give the Maple Leafs a 3-0 lead. Matthews actually almost had himself another goal as it seemed like he scored bar down on Saros, but upon further review, it went bar down and out and the score remained at 1-0 at the time.

Now I know you might be thinking, why Nick Ritchie for the 40th star? Well, he did have a couple of big hits – one that directly led to a turnover and created a scoring chance – as well as a big fight in the first period, but he ended up doing what Nick Ritchie does the most, take stupid penalties that you shouldn’t be taking in the first place. As I said, he did have a good first period on the first line with Auston Matthews and Mitch Marner, but after that, it felt like he was just doing the same old things that he’s been doing throughout the season so far. He ended up just playing 12:45 and that number isn’t too attractive when you started on the first line.
Uncategorized
Recent articles from Joseph Zita