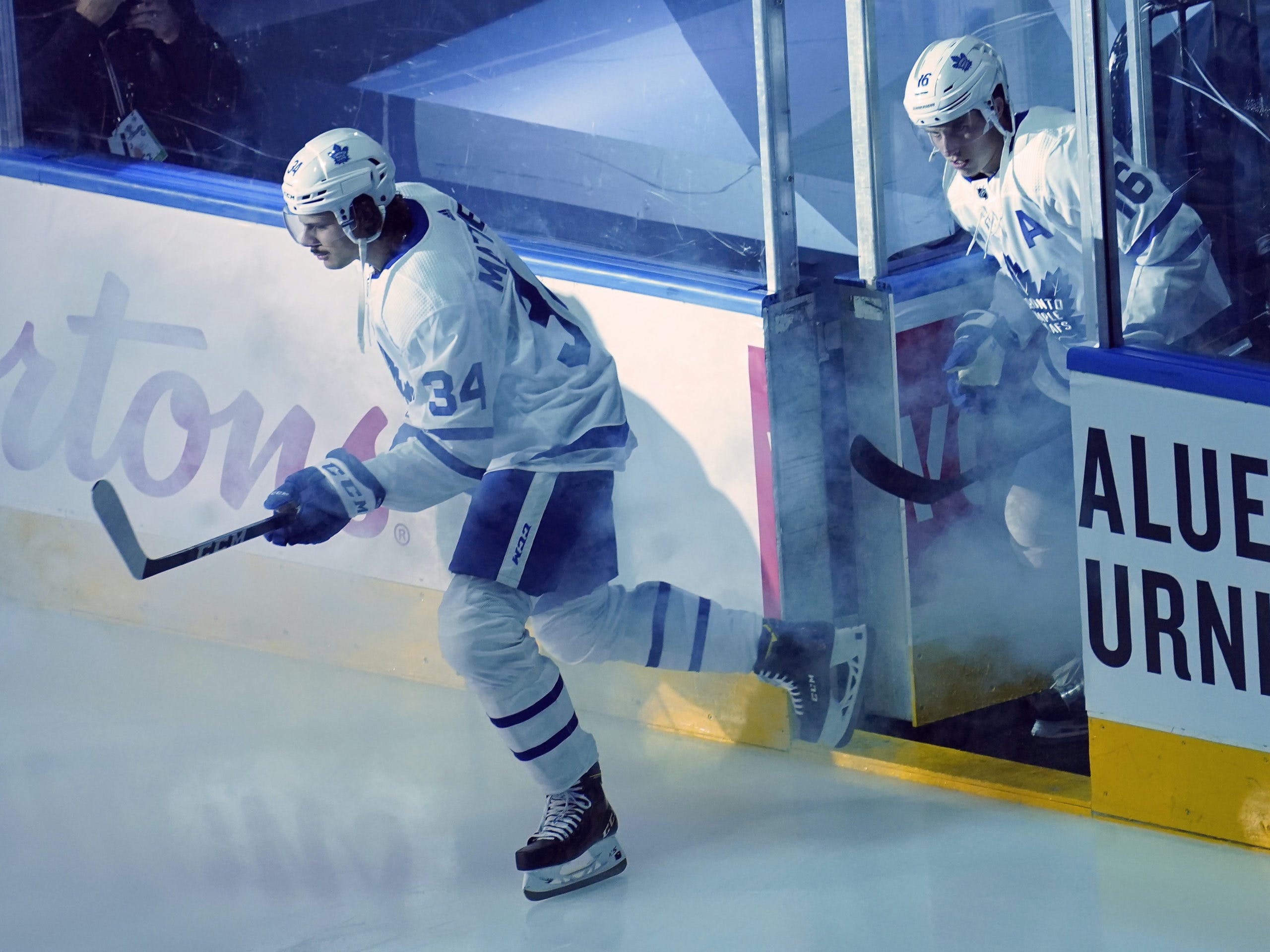 By Nation World HQ
1 year ago
by OddsShark (@OddsShark) – Sponsored Post
The Toronto Maple Leafs have Auston Matthews in peak form as they take on a slumping opponent, which suggests they can continue to add to a recent moneyline trend. The Maple Leafs are -165 favourites and the Calgary Flames come back as +145 away underdogs with a 6.5-goal total on the NHL odds for Monday at sportsbooks monitored by OddsShark.com.
Toronto is 6-3 in its last nine games against Calgary, with the total finishing UNDER six times  at online sports betting sites. The Maple Leafs are 9-7 in their last 16 home games as a -150 to -180 favourite on the moneyline, with an 8-8 OVER/UNDER split. More recently, though, they are 4-1 in their last five home games when their odds closed in that range, and four of the games finished UNDER. The Flames are 5-15 in their last 20 games as an away underdog of +130 to +160 on the moneyline, with the UNDER hitting 11 times.
Flames vs Maple Leafs | OddsShark Matchup Report
Over the two teams’ last four matchups, Toronto is under 50 percent in both shots-for and expected goals-for percentages, as well as high-danger chances shares, during the five-on-five phase, according to Natural Stat Trick. But those margins are often enough when Toronto’s natural offense, power play and goaltending are in form. (All advanced stats are solely from five-on-five play.)
The Flames, at 8-9-1, have slipped out of playoff position due to four defeats in their last five starts. Center Sean Monahan (lower-body injury) has missed the past two games, which has affected Calgary’s capability to use its depth to grate on opponents. Both the Mikael Backland-Matthew Tkachuk-Andrew Mangiapane line and the line helmed by left wing Johnny Gaudreau and center Elias Lindholm had a strong expected goals-for percentage (xGF%) during a 7-1 defeat against the Edmonton Oilers, but Calgary seems to be in a funk that can only be broken with a win.
Calgary is 19th in the 31-team NHL in shots-for percentage (49.2), as well as fifth in xGF% (53.4) and eighth (53.4) in high-danger chances share. The Flames are 23rd in goal scoring (2.56 per game) and 21st in goals against (3.00). They have the NHL’s 16th-ranked power play (20.3 percent) and 21st-ranked penalty killing unit (77.1).
Jacob Markstrom, who has been in net for every Calgary win this season, has an 8-6-1 record with a 2.87 goals-against average and .909 save percentage despite a ‘mercy pull’ against Edmonton. Markstrom has a 2-6-1 record with a 2.96 GAA and .897 save percentage in 10 career games against Toronto. Backup David Rittich is 2-1-0 with a 2.92 GAA and .912 save percentage in three career games against Toronto.
The Maple Leafs are 14-3-2 and feeding off the power of the Matthews-Joe Thornton-Mitchell Marner line. Matthews has seven goals in Toronto’s last four games and has also scored in both Calgary-Toronto matchups this season. Toronto has trouble spots in the top end of its lineup. Center John Tavares and winger William Nylander are each in slumps, although Alex Kerfoot has scored in both games since joining their line. The Jake Muzzin-Justin Holl defense pair, who will be counted on to negate Calgary’s physicality, also had an off night in Toronto’s 5-3 road win against the Montreal Canadiens last Saturday.
Toronto is 24th in the NHL in shots-for percentage (48.5), as well as 17th in xGF% (50.5) and 14th (50.6) in share of high-danger chances. The Maple Leafs are first in goal scoring (3.79 per game) and 10th in goals against (2.68), while boasting the first-ranked power play (37.5 percent) and 14th-ranked penalty killing unit (80.3).
Frederik Andersen is 11-3-2 with a 2.69 GAA and .905 save percentage. In 15 career games against Calgary, Andersen is 9-2-2 with a 2.48 GAA and .916 save percentage.
Check out OddsShark on Twitter and Instagram or head to YouTube for analysis on this week’s top games. As well, the OddsShark Computer serves up daily NHL picks for bettors.
Content
Odds News
Recent articles from Nation World HQ