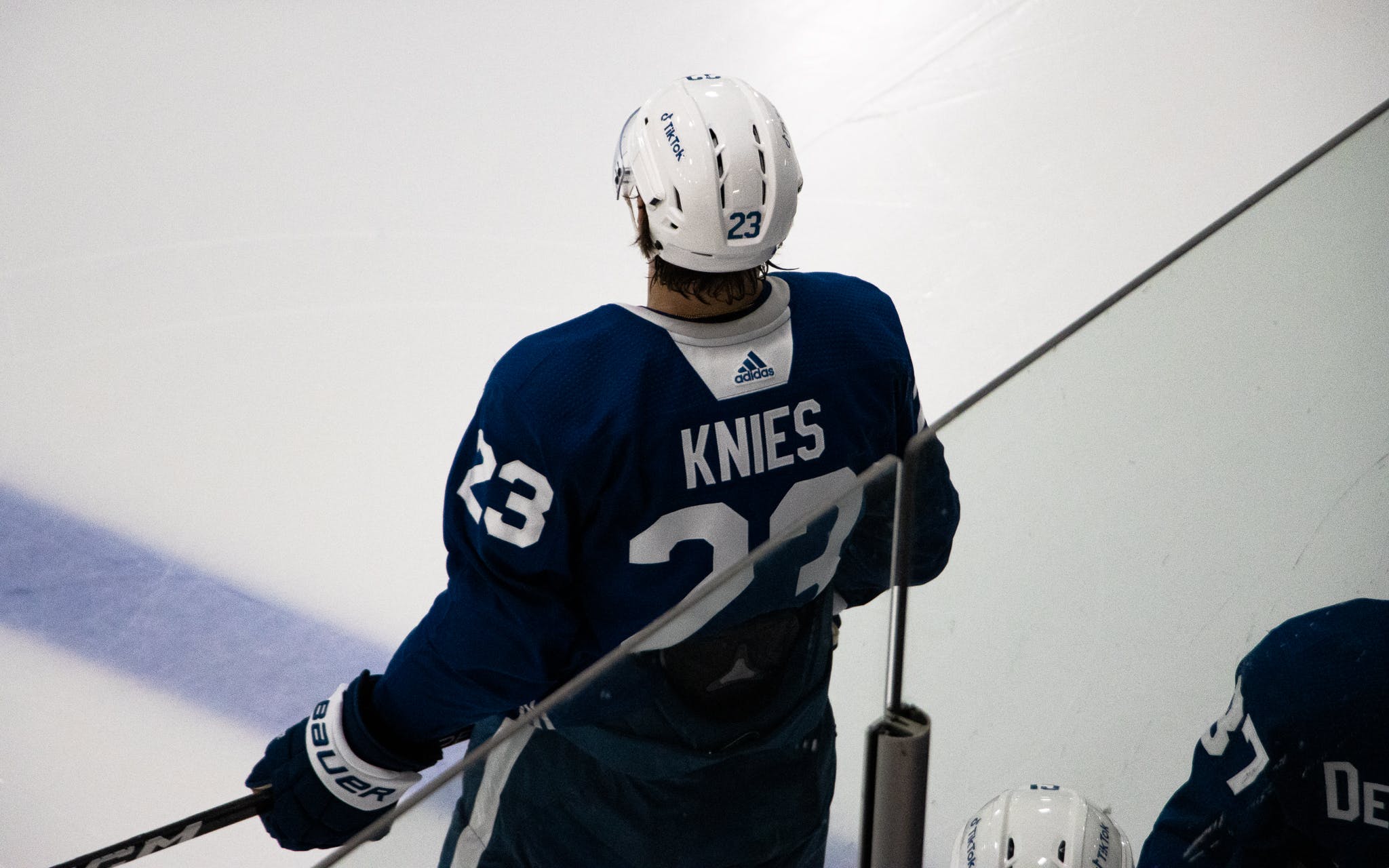 By Jon Steitzer
4 months ago
Yesterday Nick Barden wrote about how Matthew Knies enjoys the pressure that comes with being a top prospect in the Leafs organization. That’s probably a good thing because whether he likes it or not, there seems to be a need for him to hit the ground running as soon as the NCAA Frozen Four tournament wraps up.
We’ll have a lot more on Knies this summer as the World Juniors start, and as TLN embarks on our prospect rankings, but given that Knies isn’t likely a name to come up at the backend of the countdown, we’ll address that need for him to be the big body second line left winger the Leafs haven’t been able to find elsewhere.
By his NCAA numbers, we’ve been given a lot of reasons to be excited:

Knies is very much already at the top of the NCAA game and is going back to school largely because he wishes to have another go at the Frozen Four and not necessarily because the Leafs think he needs to be there. That’s somewhat admirable on his part, and one that could set the Leafs up for a nice little late season push.
That doesn’t change that asking a rookie to fix an area of need in the top six isn’t a complete gamble, but that’s one largely of the Leafs own making.
Quite simply, the Leafs don’t have the money now for an impact player. Sure, trades exist, but that is dependent on a GM looking for them, and often players are willing to waive their no trade clauses to make it happen. Options are limited.
Over the course of a season injuries will happen, and the Leafs may have the opportunity to use that LTIR relief in order to explore roster upgrades. This is also a bit of a flawed premise as it is likely wherever the injury has occurred, that’s where their need is going to be, not to mention the distasteful premise of hoping the right player gets injured for the right amount of time in order to have wiggle room at the trade deadline.
Nope, we’re back to putting a lot of eggs in Matthew Knies’ basket, and the unfair pressure that comes with that.
Still, a player that made the (non-NHL) Olympic team before he finished his first year of college likely has a lot to offer. And if we didn’t get a chance to see much of what that is in development camp, we’ll get to see it shortly at the World Juniors.
Matthew Knies is the power forward that we’ve heard about Toronto needing since the final years of Gary Roberts’s prime. Knies not only is that presence who takes up important real estate in front of the opposition’s goal but has the ability to attack the net just as well. At a time in the season when the narrative turns to their need for size and physicality, Knies will be the way to address it, but with the caveats of:
a) he’s brand new to the league and will still have a lot to learn.
b) the Leafs have really struggled with making the most of players like Ritchie and Clarkson, and do they run the risk of miscasting Knies as well. (Note: I certainly hope the long term upside for Knies is beyond those two players, but from an archetype perspective, I have concerns about Leafs and power forwards.)
With that last one the lesson probably is that just because you tried it a couple of times and it didn’t work, doesn’t mean it definitely won’t. (Someone will counter that with the definition of insanity, but I’m choosing the “if at first you don’t succeed…” approach). Matthew Knies seems like a special talent and it will be exciting to see what he can bring to the Leafs when he’s ready.
Data sourced from Kyle Cushman and Pick224
More from TheLeafsNation.com