MacKinnon get paid, three great defenceman retire and the Rangers and Stars make a trade: Around the NHL 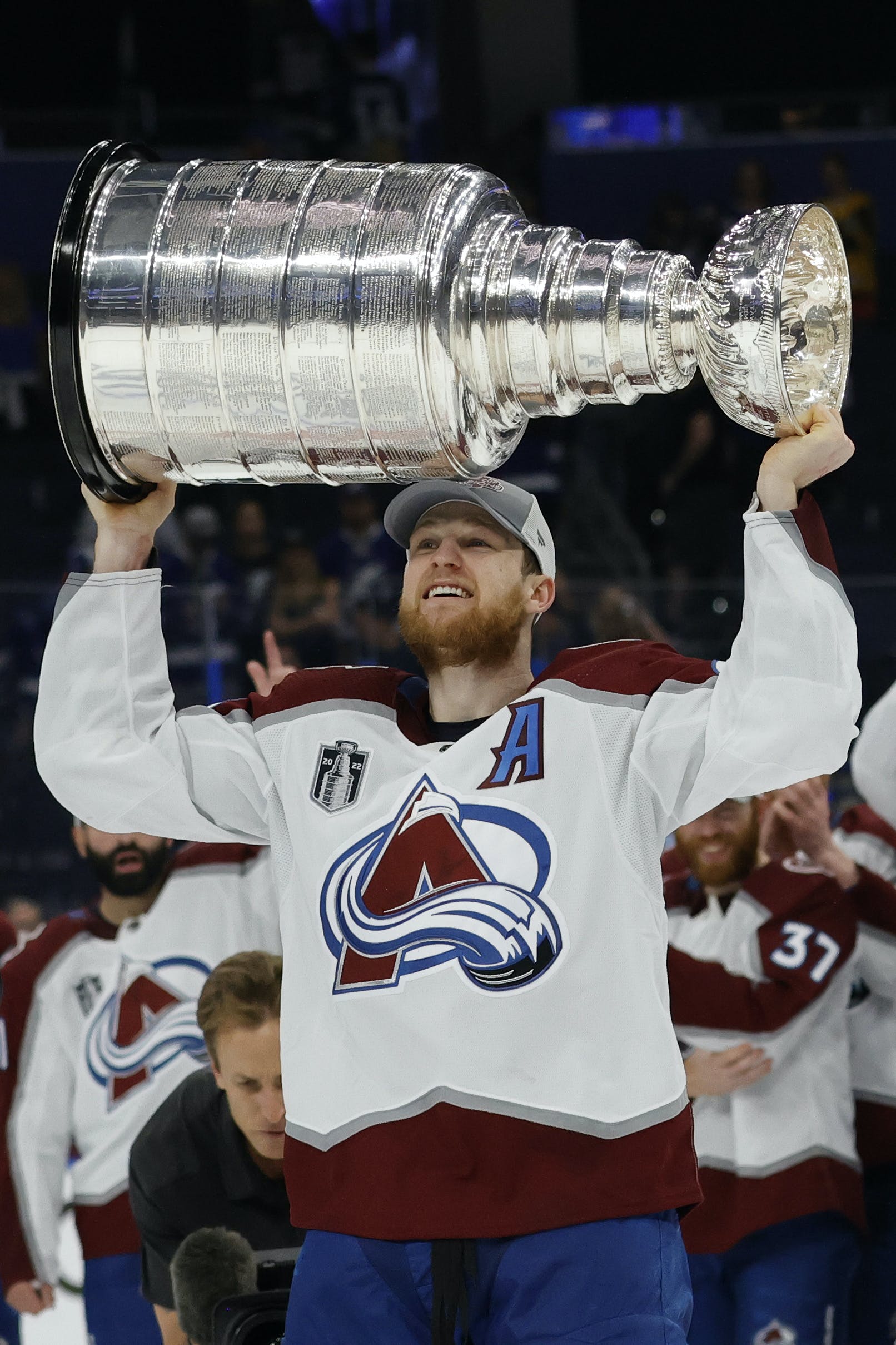 By Scott Ony
4 months ago
The NHL season is just around the corner. In just three days there will be pre-season games and two weeks after, the regular season will be underway. With the season on the horizon, teams are beginning to change their focus from building a roster to evaluating it.
Over the past week a superstar agreed to deal to make him the highest paid player in the league, three of the best defencemen of the 2010’s retired, the Rangers and Stars made a trade, some depth players signed short-term contracts and PTOs, and the Maple Leafs announced two players will miss camp with injuries.
Nathan MacKinnon contract
On Tuesday Nathan MacKinnon agreed to terms on an eight-year extension with the Colorado Avalanche that will pay him 100.8 million dollars. The deal will begin in 2023-24 and carry a cap hit of 12.6M per year. It also has full move protection throughout and his modified not trade clause this season has been upgraded to full no move clause.
Drafted first overall in 2013, Mackinnon has 648 points in 638 games with the Avs, a Stanley Cup, a Calder trophy, and a Lady Byng. His playoff stats are even more impressive. In 70 games he has 93 points.
The Avalanche have now locked up their core of captain Gabriel Landeskog, Norris and Conn Smythe trophy winner Cale Makar and MacKinnon for the next eight years. No team has won a Stanley Cup in the salary cap era with a player on the roster with a cap hit over ten million but if there is a team to do it, it’s this one.
This contract sets the standard for superstar players going forward. Both Auston Matthews and Mitch Marner will likely earn more than this after their contracts expire. The salary cap should increase by then, but the question remains, is it possible to win with two players taking up such a large portion of the salary cap? Only time will tell.
Chara, Subban, and Yandle retire
Three of the best defencemen of the 2010’s and in Chara’s case, the 2000’s have called it a career.
Drafted in the third round in 1996, Chara was a relatively unknown commodity. It took him a few years to adjust to the North American game, but he certainly figured it out. At 6’9” Chara was a once in a generation type of player.
For years he dominated the Maple Leafs as a member of the Boston Bruins and the Ottawa Senators. He leaves the game seventh all-time in regular season games played (1680), a Norris Trophy winner (2009), a Mark Messier Leadership Award winner (2011) and captain of the 2011 Stanley Cup Champion Boston Bruins.
He signed a one-day contract to retire as a member of the Bruins. The next stop for him will be the Hall of Fame.
P.K. Subban will forever be remembered as one of the most electrifying players in Montreal Canadiens history. A second-round pick in 2007, Subban spent seven seasons with the Habs, won the Norris Trophy in 2013 and helped them to the conference finals in 2014.
He also played for the Nashville Predators and the New Jersey Devils. Last season he was awarded the King Clancy Memorial Trophy. In 834 games he scored 467 points.
From 2006-2022 Keith Yandle played in 1109 games for four NHL teams, scoring 619 points. From 2009-2020 he averaged more than half a point per game in every season. He is one of the most consistent offensive defencemen the game has ever seen.
Last season he set the NHL ironman streak by playing in 989 consecutive games. That record will likely be broken by Phil Kessel this year but it’s an amazing achievement, nonetheless.
Lundkvist traded to Stars
The New York Rangers have traded defenceman Nils Lundkvist to the Dallas Stars for a 2023 first round pick and a 2025 fourth.
Drafted 28th overall in 2018, Lundkvist made the move from Sweden to North America last season. In 25 games for the Rangers he scored four points.
Unhappy with his place on the Rangers depth chart, he asked for a trade earlier this week. He should have a chance to play top four minutes with Dallas this season.
Depth moves
The Arizona Coyotes re-signed 2018 fifth overall pick Barrett Hayton to a two-year contract at an AAV of 1.75M. Hayton has played in only 94 NHL games, scoring 31 points.
Sean Durzi has re-signed with the Los Angeles Kings for two years at an AAV of 1.7M. Durzi was drafted in the second round by the Maple Leafs in 2018. He was a key piece in the Jake Muzzin trade.
He scored 27 points in 64 games for the Kings in his rookie season last year. The sample size is small but Durzi looks to be an important piece for the Kings going forward.
Notable players to sign PTOs this week include:
Alex Galchenyuk (COL), Artem Anisimov (PHI), Antoine Roussel (PHI), Sonny Milano (CGY), Alex Chiasson (AZ), Victor Rask (CBJ), Ben Harpur (CBJ), Zachary Senyshyn (NJD), Matt Bartkowski (NYR), Jason Demers (EDM) and Jake Virtanen (EDM).
Liljegren, Engvall injured
Leafs defenceman Timothy Liljegren will miss training camp as he recovers from sports hernia surgery. He is expected to be out for six weeks. With Rasmus Sandin still unsigned, depth additions Jordie Benn and Victor Mete could be relied upon to fill Liljegren’s role.
Pierre Engvall will be missing time as well. He has been bothered by a nagging injury, but it isn’t expected to be long term. He is expected to miss roughly two weeks and should be good to go near the start of the season.
More from TheLeafsNation.com: