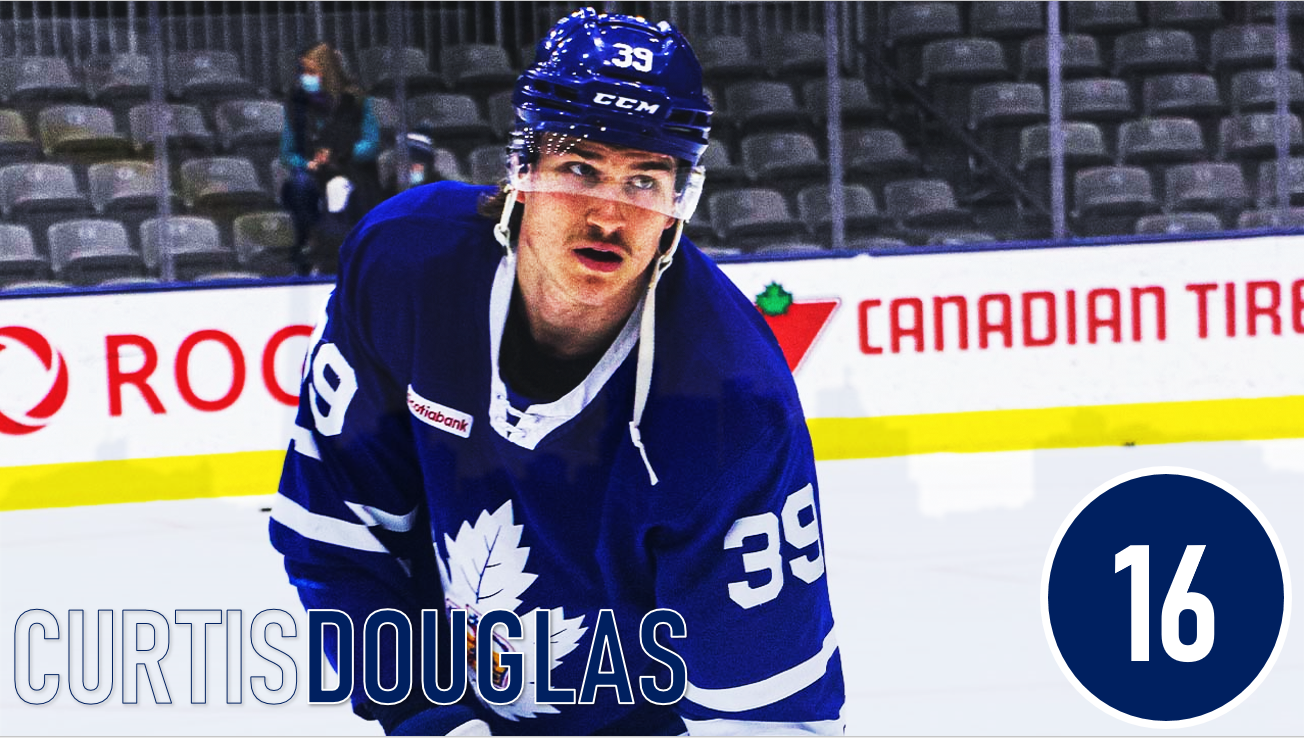 By Nick Barden
6 months ago
There aren’t many Maple Leafs prospects that fascinate me more than Curtis Douglas.
When the 22-year-old signed with the Toronto Marlies last year, there were a lot of question marks. Could he use his height to his advantage? Could he become a better skater? What could he be in the Maple Leafs organization?
Well, after just his first full season in the American Hockey League, Douglas has proved to be someone Toronto wants to invest their future in.

C | Toronto (AHL) | Age: 22 | 6-foot-8 | 249 lbs | Shoots: L
Acquired: AHL (Toronto) signing to NHL signing | 2021 Ranking: N/A
There’s a lot to like about the 22-year-old being signed by the Maple Leafs and you should be excited for him if everything works out.
Douglas entered the 2021-22 season not being the best skater and not being able to use his height to his advantage at the professional level. Over the course of the year, Douglas improved in every single category possible, becoming much more complete.

‘I offer a lot of things other than just size’: Height isn’t everything for Marlies’ Curtis Douglas

He played a lot of fourth line centre on the Toronto Marlies alongside players like Rich Clune and Jack Kopacka. It wasn’t a line with much fire power — but when there was scoring — Douglas was a big part of it.
The first thing people might notice about the 22-year-old is his height and understandably so. But looking closer at the centreman, he’s got much more to offer.
One of the first aspects that stood out to me was his soft hands. Although he’s incredibly tall, Douglas is able to maneuver around his opponents quite easily when he has the puck on his stick.
This was towards the end of the season, after a long year in which Douglas really improved his skating. There were countless days where I saw the 22-year-old working with Maple Leafs skating development coach, Randi Milani.
It seemed like every time Milani was on the ice for a development session, she was with the 22-year-old.
Over the course of the season, Douglas became more and more fluent in his skates. He even got faster as the season went on too. This will be something that Toronto will continue to work on with him because if he can become a strong skater with his size, there’ll be plenty he can do at the NHL level.
At the conclusion of his first AHL season, the 22-year-old finished with 34 points (13G, 21A) in 67 games — a very good total all things considered.
Spending most of his time on the fourth line won’t get you plenty of points, but Douglas did incredibly well in that category. One of his strong suits is his vision when he has the puck on his stick.
He has a great ability to find open players and create scoring chances for them with a pass. Even when he’s coming from behind the net.
Another part of his game that excelled through the back-half of the season was his goal-scoring. In Douglas’ final 27 games of the year, he scored nine of his 13 goals on the season — most coming from either in front of the net, or by his shot.
Being so tall, the 22-year-old is able to have a shot that’s incredibly deceptive. It’s really difficult to predict where he’s going to put it. Aside from that, it’s a very hard shot, too, especially when he’s able to get it off.
With his size, though, comes his strength with the puck and without it. If Douglas is seen going into the corner, there’s usually a strong chance he comes out successfully with the puck. But where the strength comes in most is when he’s in the faceoff circle.
There were many scenarios throughout last season where Douglas would be out for an important faceoff because of how strong he was. That will be something the Maple Leafs look at when training camp opens up in the fall — how he fares against Toronto’s top players in the faceoff circle.
Douglas is such an intriguing player because he’s so big and if he can become a stronger skater and use his size a lot more, there’ll be a NHL roster spot in his future.
I’d say one thing  the 22-year-old needs to work on more is his defensive zone breakouts. There were instances throughout the season where he’d turn the puck over when trying to exit the Marlies’ zone. It’s not a big mistake in the AHL for the most part, however NHL players will capitalize on those chances a lot more if they’re given.
I there’s anything we don’t have to worry about, it’s fighting because Douglas has that covered. He’s currently undefeated in AHL fights and I’m not sure anyone should drop the gloves with him. Ever.
There should be a lot of excitement around Douglas for the future. He could turn out to be a great player for the Maple Leafs, if everything works out. It probably won’t be this upcoming season, but I believe the 22-year-old will push to be an important player in Toronto in 2023-24.
It could be then, it might be a bit longer, but there’s a lot to like about Douglas, and the Maple Leafs were smart in signing him to a two-year, entry-level contract earlier this year.
More from TheLeafsNation.com