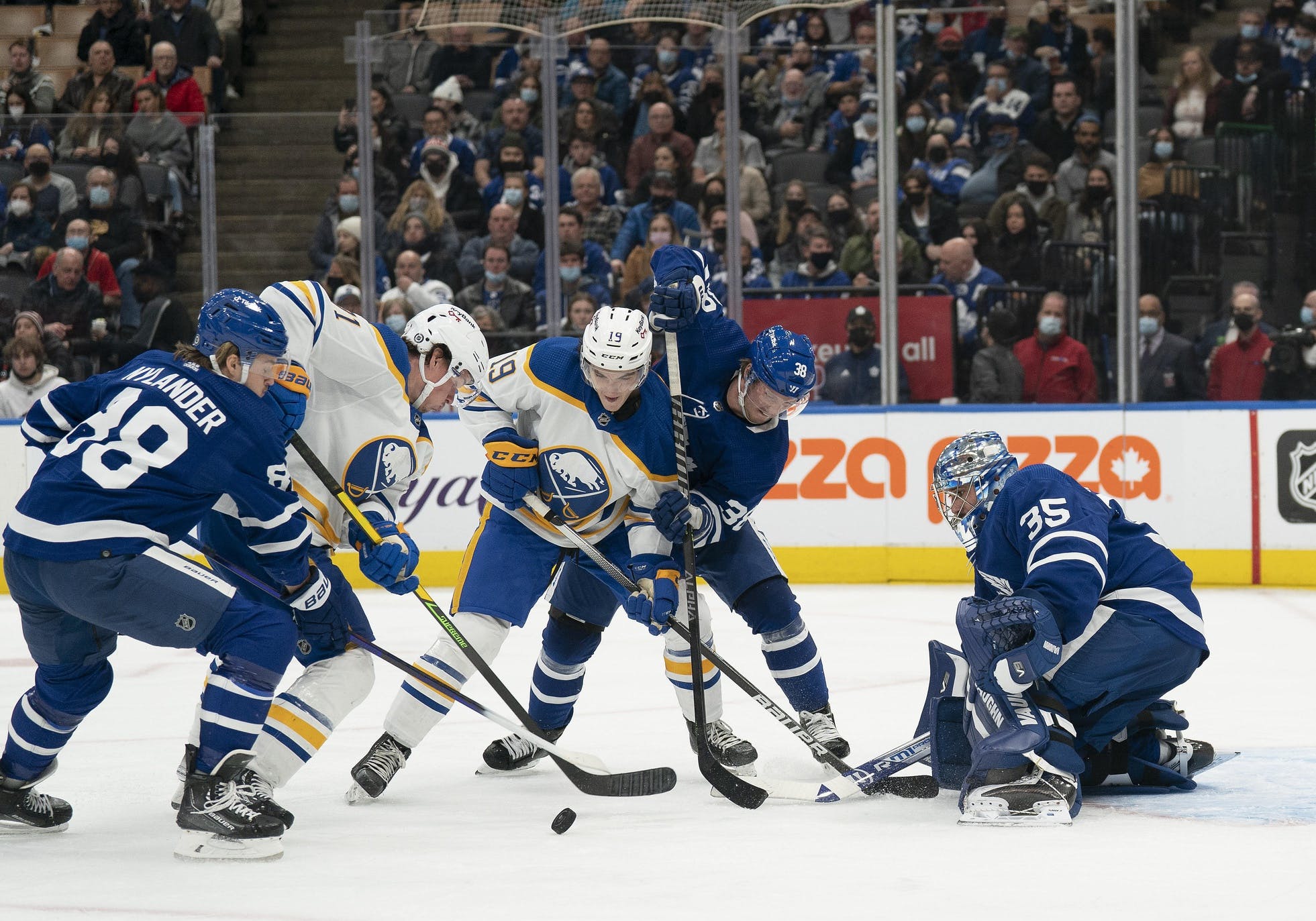 Photo credit:Nick Turchiaro-USA TODAY Sports
8 months ago
Toronto Maple Leafs defenceman Justin Holl put it best on Tuesday when he spoke to reporters about playing against a team that isn’t destined for the postseason like the Buffalo Sabres.
“Sometimes, we play down to their level.”
That’s what happened against the Buffalo Sabres on Wednesday in a 5-1 loss.
Unlike some embarrassing defeat the Maple Leafs have had this year — like the one against the Montreal Canadiens nine days prior where Keefe hoped that would act as a wakeup call —  the Leafs didn’t muster anything at the Sabres’ net.

“In terms of how we played with the puck, we were really careless and didn’t have much happening,” Maple Leafs coach Sheldon Keefe said.  Offensively, we were abysmal. All four lines.”
Toronto’s top line accounted for their only goal when Michael Bunting and Mitch Marner assisted on Rasmus Sandin’s tally in the first period.
That was the only highlight for the 21-year-old.
Playing on the right side of the team’s top pair with Morgan Rielly, Sandin was on the ice for three of Buffalo’s five goals.
‘No disrespect to them or anything, but I think that’s a team we should beat,” Sandin said after the game. “We just weren’t prepared the right way. It’s something we need to get better at.”
Keefe poured cold water on trying Sandin up with Rielly on his off side in the future but also felt the team’s overall play was poor that the young defenceman shouldn’t be the focus on the game.
“There were some things there where the focus would be on him, some of the mistakes around the goals, it’s a complete mess around him,” Keefe said Saind. “The three forwards on the ice, his partner, the goaltender, there’s not much happening there.”
Perhaps the player who had the most to lose from a game like this was goaltender Petr Mrazek, who received some Bronx cheers. Toronto played in front of a full house for the first time since the Omicron variant of the COVID-19 pandemic forced the team to reduce capacity in 2022.
“Obviously they want us to play good games and that wasn’t the result tonight,” Mrazek said.
Mrazek made back-to-back starts for the first time this season and a solid showing could have helped him go on a run as the team’s starting goaltender in place of a struggling Jack Campbell.
The 30-years-old Czech made 26 saves on 31 shots and although it was difficult to assess his performance given how poor the team played in front of him, it likely wasn’t good enough to earn a third consecutive start.
“You know you need to get a save or two in there, that’s part of the goalie’s job,” Keefe said.  “But one’s a redirection, there’s basically a tap-in with the other guy wide open at the net. They got chances in the slot tonight that we did not get.”
Toronto put players in a blender for much of the third period in an effort to spark offence but that didn’t do much to spark anything.
The Maple Leafs missed out on a chance to move further up in the standings and not getting the two points against a team so far down the table will sting. But at least they experimented and they deserve some credit for that.
Sandin is not an option for the Leafs as a right-side, first-pair defenceman. That’s some intel they didn’t have before. Timothy Liljegren sat as a healthy scratch, but will likely re-enter the lineup to give the defence some more left and right balance.
An issue that emerged prior to this game was the lack of production from the team’s second line. Although they performed well on the road against the Washington Capitals on Monday, there are some real issues there and Tavares has now gone 14 consecutive games without scoring a goal.
“We just didn’t generate enough,” Tavares said. “We have to do a better job of generating offence, especially in a game like that.”
Toronto had one power play and they didn’t score. That extended their drought to 0-15 over their last 17 games.
Until midway through the game, the Maple Leafs were still within reach of figuring this one out. But once Tage Thompson scored late in the second period to give Buffalo a 3-1 lead, Toronto didn’t generate anything to give you the impression they could come back.
And that is the most damning thing about the game.
More from THELEAFSNATION
News