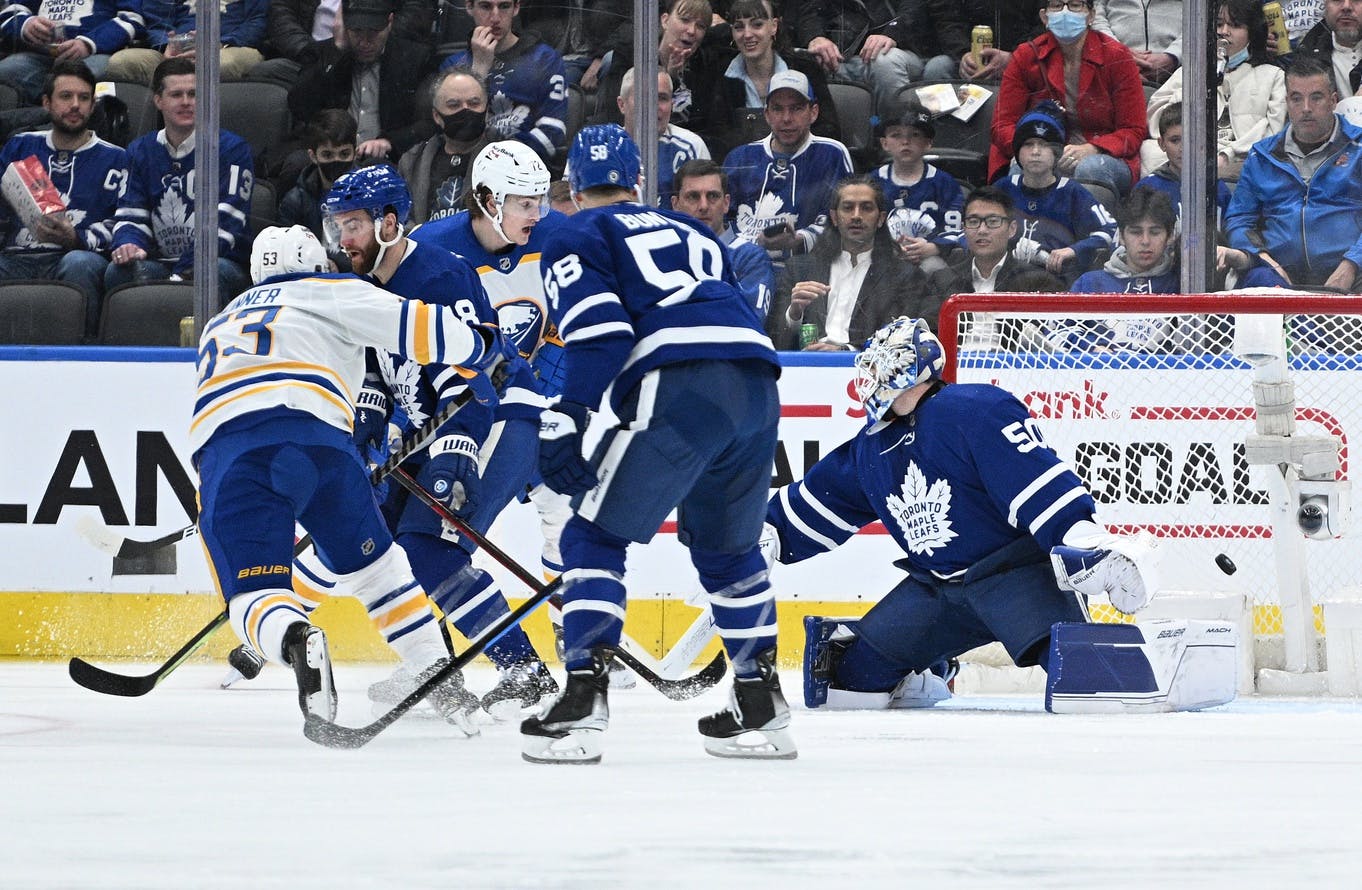 Photo credit:Dan Hamilton-USA TODAY Sports
9 months ago
The Toronto Maple Leafs had another one of those games again.
After flying high against some of the top teams in the NHL, they fell flat against the Buffalo Sabres, 5-2, in what was their third consecutive loss to the 27-37-11 team.
“It’s four games against this team and we’ve been no-shows in all four,” Maple Leafs head coach Sheldon Keefe said after the game.
In fact, it was difficult, if not predictable to watch. Outside of Saturday’s 3-2 home victory against the Montreal Canadiens, the Leafs have regularly fallen flat against teams on the outside of the playoffs picture.
Even in victories, Toronto hasn’t looked good against those opponents.
Toronto opened up their four-game road trip 10 days ago against the struggling Philadelphia Flyers. Although they defeated them 6-3, they were badly out-chanced and Philly finished the game with a 55.96 expected goal percentage at 5-on-5 per NaturalStatTrick.com.
So is it just difficult for the Leafs to get up for those opponents?
“I really don’t think it’s that,” Maple Leafs defenceman Morgan Rielly said. “It’s hard to believe but I do think we’re ready to play, it’s just a matter of execution and we’re just having a tough time for whatever reason.”
The situation has put management in a difficult spot.
The Leafs are in a battle for playoff position right now and with the Florida Panthers defeating the Anaheim Ducks on Tuesday, it’s looking all but certain that Toronto won’t finish any higher than second place in the Atlantic Division.
“Games like this one (tonight) is why we’re still competing for home ice in the first round,” Keefe said. “I wish we didn’t have nights like this. We’d be a team that’s competing for a Presidents’ Trophy.”
Now, the Presidents’ Trophy remark may have people scoffing because of the differing opinions of its significance, but the point is made.
Four days ago, TSN Hockey Insider Bob McKenzie mentioned in a radio hit that he heard when management approached the core Leafs players about losing games against teams like Buffalo, that his understanding was that the core players pushed back and said when they’d play the top teams in the league, that they’d take care of business. The point was that the Leafs learned so much from their playoffs disappointment last season that they’d make sure they get the job done.
So far, that’s proven to be the case. But it doesn’t make it easier for the coaching staff to push any points across.
“There’s an expectation that we’ll bounce back,” Keefe said. “It’s easy for me to push past this one but it doesn’t make it any less frustrating.”
It’s hard to pinpoint the exact reason why this has been happening. But there seems to be a big clue that came from Tuesday’s game.
“They played no-shows, physically,” Keefe said of his team. “They have a big team with lots of skill and getting possession so when you don’t compete and you’re not engaged in the game, physically, you don’t execute on offence, you’re not going to have the puck much and then they have it and it plays right into their hands.”
Toronto lost the possession battle Buffalo with a 46 per cent Corsi at even strength per NaturalStatTrick.com, yet in that time Buffalo dominated in hits by a 32-18 measure.
Usually, when you have a lot of hits, it means you don’t have the puck but that certainly wasn’t the case for the Sabres.
Perhaps the biggest sign of apathy in the game was at the end when Buffalo’s John Hayden ran into Leafs goaltender Erik Kallgren. No Leafs stepped up to get physical, at a time where there was really no risk to do so for fear of penalties, since the game was all but over.
With nine games remaining, Maple Leafs forward Alex Kerfoot was asked what the team’s priority should be going into the final nine games of the regular season.
“Move as high up in the standings and have everyone healthy going into the playoffs,” he said.
And while the Leafs didn’t get the points on Tuesday, they appear to have got out of it without any injuries that we know of. With players like goaltender Jack Campbell and defenceman Jake Muzzin out of the lineup because they are “not quite at 100 per cent” according to Keefe, we could see more trepidation from this group between now and the end of the regular season when it comes to self-preservation, regardless of the opponent.
Toronto’s got the ‘x’ next to their name in the standings. They know where they’re going. Now it’s up to them to make sure the bad habits don’t creep in.
More from TheLeafsNation.com
POINTSBET IS LIVE IN ONTARIO