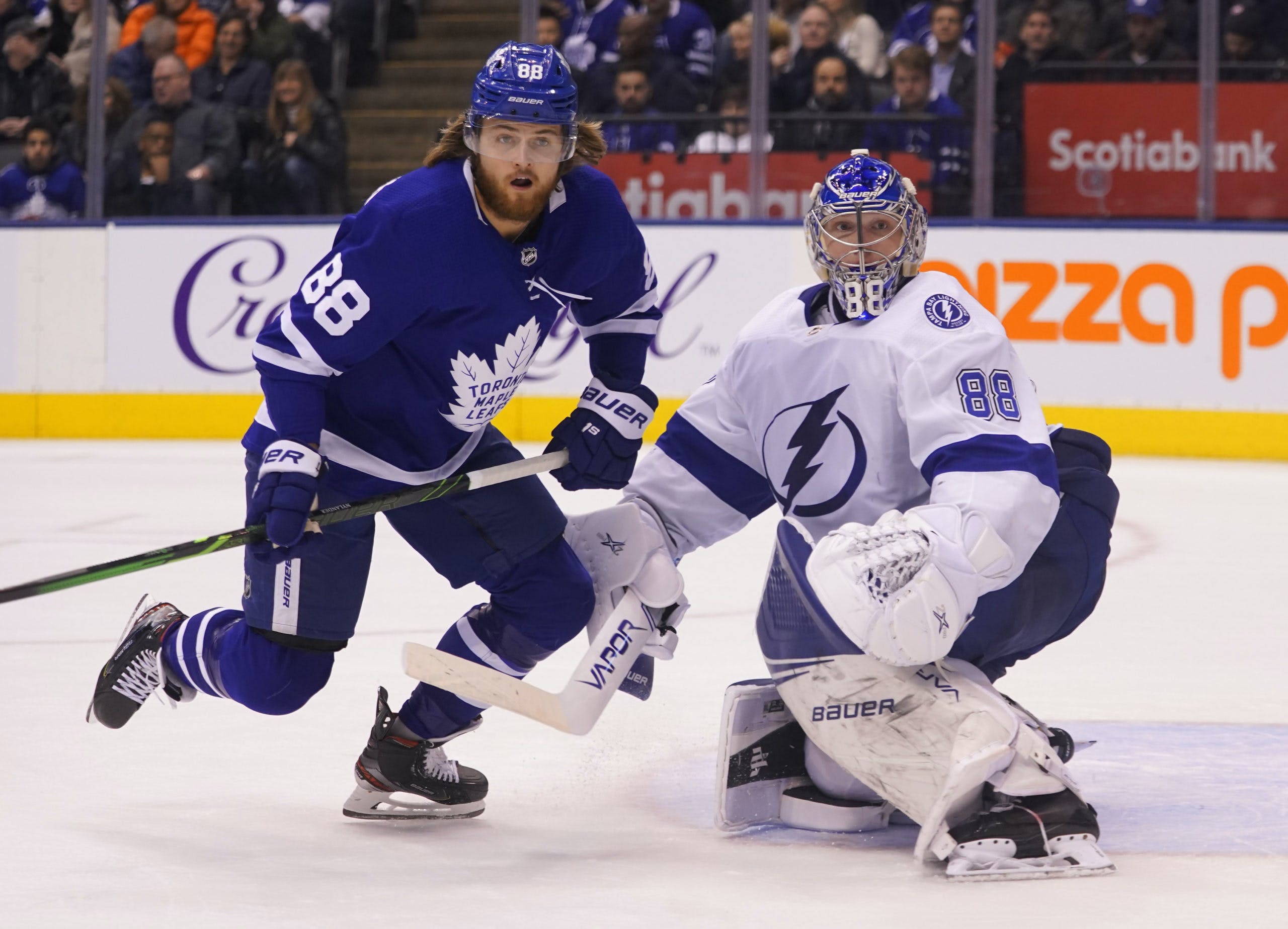 Photo credit:John E. Sokolowski-USA TODAY Sports
9 months ago
The Toronto Maple Leafs will take on the Tampa Bay Lightning in the first round of the Stanley Cup Playoffs, beginning with Game 1 set to take place at Scotiabank Arena on Monday.
Heading into the evening, the Lightning needed to record one more point than the Maple Leafs’ opponent on Friday, the Boston Bruins.
The Leafs defeated the Bruins 5-2 in a game that saw both players rest a combined salary cap hit of $72,775,195. The regulation win by Toronto rendered the Lightning’s game against the New York Islanders moot as far as playoff positioning is concerned.
”The main objective tonight was to get through the game healthy and I believe we have,” Maple Leafs coach Sheldon Keefe said. “I was monitoring ice time more than I was monitoring the play to be honest. It was a weird game.”
Apart from William Nylander scoring twice to finish with 34 goals this season and becoming the third player to hit 80 or more points this season and Nick Abruzzese scoring his first NHL goal, there wasn’t anything notable to take from the game.
The focus for the Maple Leafs is now squarely on the task at hand and that’s trying to get past the first round of the playoffs for the first time since 2004. That task goes through the two-time defending Stanley Cup champion Lightning.
”It’s a massive challenge, of course,” Keefe admitted. “I look at our group, I think the harder the better. I think that’s what we need.”
It’s a stark contrast to Toronto’s draw during the 2021 playoffs. After handily winning the ‘North Division’ comprised of solely Canadian teams, the Maple Leafs were upset by the Montreal Canadiens in the opening round. It was a devastating collapse that saw Toronto squander a 3-1 series lead.
The devastation of the 2021 playoff upset sat with the Leafs for a while. They addressed talked about it in the summer and felt they learned from it, but their mettle was tested early this season when they started this season with a 2-4-1 record.
“I think it’s a little bit of a balancing act because you want to address it and learn from it, but you also want to move on,” Morgan Rielly said on Friday. “I don’t think that’s anything that anyone in our room is going to look back on that fondly unless we right the ship.”
In their recent playoff struggles, Maple Leafs management have made a point to cite Tampa’s rise in the league as a template for success after devastation. Specifically, the Lightning’s struggles in 2018-19.
After winning the Presidents’ Trophy for finishing with the best regular season record, the Lightning were swept by the Columbus Blue Jackets in the 2019 playoffs. Tampa didn’t make any drastic changes to their core and bounced back to win the next two Stanley Cups.
“I know it’s not what people want to hear, but moments like this are a part of the story that prelude success, most of the time,” Dubas said in his year-end availability on June 2. “That’s what I believe and banking on here as we guide the ship ahead.”
The Lightning are the defending champs. To beat the man, you’ve got to beat the man, as wrestler Ric Flair is known to say.
And for a some of veterans on the Maple Leafs like Jason Spezza and Mark Giordano, this could be their last kick at the can.
“This is very important for me,” said the 38-year-old Spezza. “You play your whole life trying to win a Stanley Cup and obviously father time is catching up to everybody so you don’t want to waste chances.”
The Maple Leafs finished with a 54-21-7 record, setting new franchise records in wins and points (115). There was Auston Matthews’ franchise record 60 goals and career highs from several players.
They couldn’t have asked for a much better regular season following the disappointing summer.
But none of that matters as they prepare for a new season. Only a deep playoff run will be an acceptable result.
”Now it’s about executing at performing at the right time of year,” Rielly said.
POINTSBET IS LIVE IN ONTARIO