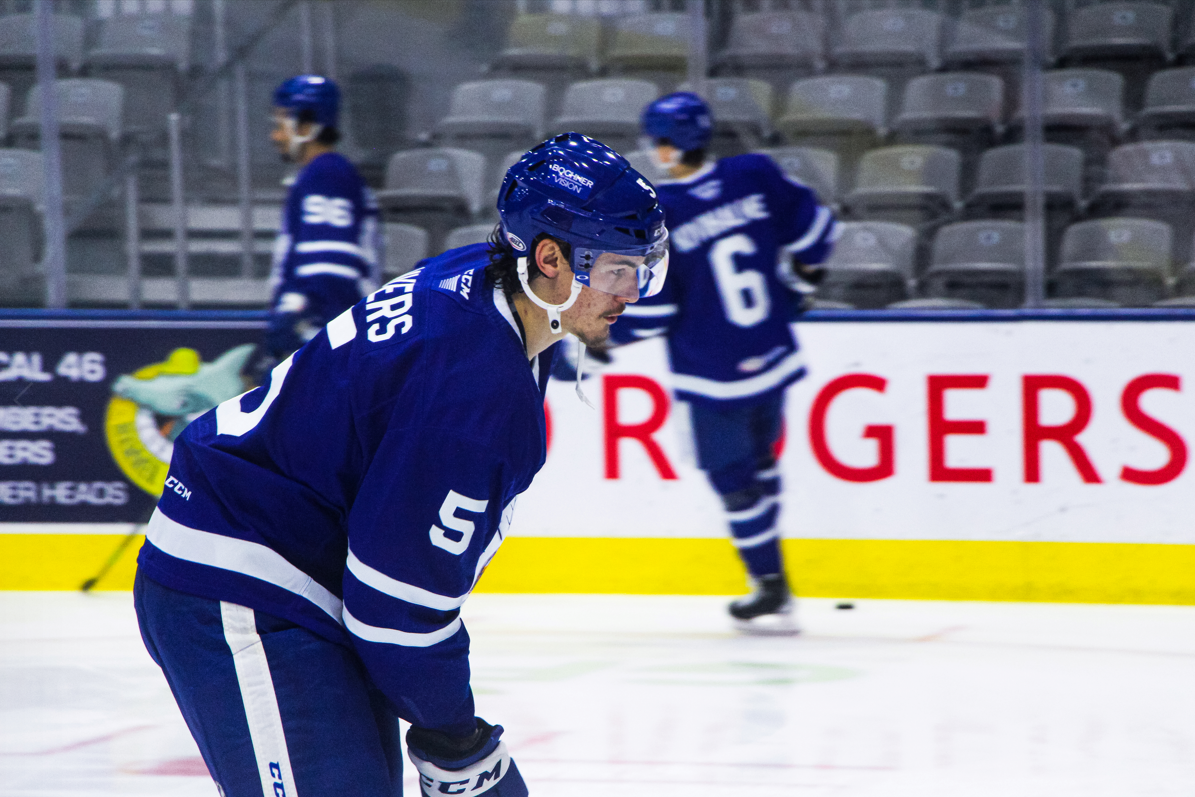 By Nick Barden
7 months ago
The Toronto Marlies lost an important piece when Alex Biega was traded to Nashville, but they later gained it back in a loan move.
Philippe Myers was added onto Toronto’s roster back on March 23rd, two days after the NHL’s trade deadline concluded. It’s the first time in the past three seasons that the 25-year-old was being sent down to the AHL. But looking at this as a demotion wouldn’t be right, as this is an opportunity to prove his worth on a good Marlies team.
“Obviously it’s a good opportunity to get some games in, play lots of minutes, and just try to have fun with it,” said Myers after practice on Friday. “For me, it’s just I haven’t played that many games this year with Nashville, so I’m just trying to get my legs back under me and just find my game again and go from there.”
The 25-year-old has only played seven games with the Marlies but already fills an important role playing key minutes on Toronto’s top pairing. He, and Teemu Kivihalme have been one of the best defence pairs the Marlies have had this season, usually playing against the opposing team’s top lines.
“Myers has come in and stepped up with Kivihalme in being kind of a shutdown pair,” said Marlies head coach Greg Moore. “Myers brings a good physicality and toughness to our backend and man, can he hammer a puck. He can shoot it. He’s been great. He’s come in and done a really good job in just asserting himself as part of the team and getting to know the guys really quickly and being a good presence for us.”
Sometimes when new players come in, it takes some time to get acclimated to the systems and everything else. But when Myers arrived in Toronto, he was placed on the top pairing and hasn’t looked back since.
“I’ve kind of embraced it,” said the 25-year-old said of joining this team. “I love playing against the top lines, I embrace the challenge, and that’s kind of been my mindset coming in here.”
The Moncton, New Brunswick native was added to the Marlies at a crucial time as Toronto looks to make a push into the playoffs. Evidently, they’ll make the playoffs, but it’s more about positioning themselves to bypass the best-of-three first round. And Myers is excited to help the Marlies try and do just that.
“Being a big part of a playoff push is what it’s all about,” said Myers. “I’ve played in the NHL for the last three years, so bring as much as I can to the team and try to lead by example.”
It’s always difficult for a player to navigate this sort of situation. Playing in the NHL for so long, it might be hard to take the news that you’re going to spend some time in the AHL. But for Myers, it’s all about staying positive and rolling with the opportunity at hand.
And while he might be playing AHL games right now, the 25-year-old still feels like he’s playing top-level hockey in some sort.
“We get treated like we’re in the NHL here, it’s been amazing so far,” said Myers with a grin.
As of Saturday morning, the Marlies are positioned to play in the best-of-three first round against the Belleville Senators. However, with a defence core of Myers, Kivihalme, Kristians Rubins, Joseph Duszak, Mac Hollowell, Carl Dahlstrom, Filip Kral, and Chad Krys (and a few interesting rookies), anything is possible.

You also cannot forget about the offense of Brett Seney, Nick Robertson, Alex Steeves, Josh Ho-Sang, and whole crop of other important players.
With ten games remaining, each player on the Marlies has the chance to do something special. If they bypass the first round and even get out of the second, anything is possible for this team.
More from TheLeafsNation.com
POINTSBET IS LIVE IN ONTARIO