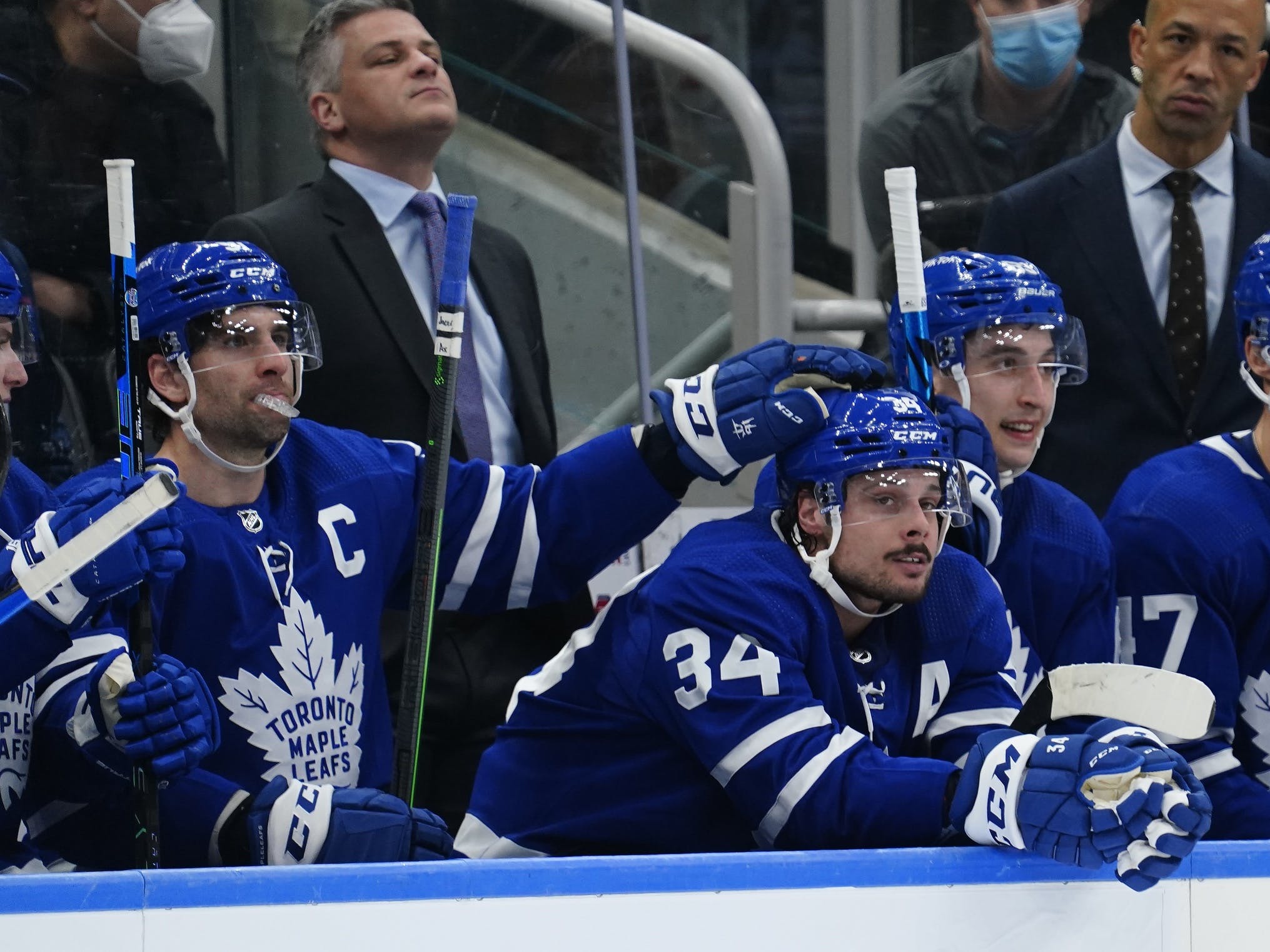 By Dylan Murphy
5 months ago
We’re about six weeks out from the start of NHL training camps and with the dust (mostly) settled on Free Agent Frenzy, it’s as good a time as any to make some far-too-early predictions on how the standings will fall in the Toronto Maple Leafs’ division.
Utilizing the eight Atlantic Division team rosters as currently constructed and taking into account players that have departed the teams in recent weeks, the following is a preliminary prediction of where the Leafs and their divisional rivals will rank, with some (hopefully sound) logistical reasoning as to why these rankings were chosen.

Notable Additions: Ian Cole, Philippe Myers, Vlad Namestnikov
Notable Departures: Ondrej Palat, Ryan McDonaugh, Jan Rutta
Probably a bit of a surprise choice for the top spot, given that Tampa lost a top-six forward and a top-four defender, and the only pieces they brought in were depth options, but the Lightning are a team that refuses to lay down and die. This is a team with a clear-cut identity and some of the strongest systems-oriented play in the NHL. Every year in the past couple of seasons, it seems as though they lose a significant piece of their roster, and yet, they still come out strong and power through the opposition to secure a playoff spot.
With regression expected for the Florida Panthers (more on them later) and the many unknowns surrounding the Leafs’ goaltending, Tampa may very well return to the top of the pile in the division. The one caveat that could complicate this prediction is the unknown weight of the hard miles the core of this team have accrued in the past two-and-a-half-years. With three straight Stanley Cup Finals appearances, the Lightning have played more hockey than anybody since March of 2020, which might extract a toll on them and lead to some regression, but not enough to knock them out of a playoff spot.

Notable Additions: Calle Jarnkrok, Nicolas Aube-Kubel, Matt Murray, Ilya Samsonov
Notable Departures: Jack Campbell, Ilya Mikheyev, Ondrej Kase, Ilya Lyubushkin, Petr Mrazek
The 2021-22 Toronto Maple Leafs was, statistically, the best Maple Leafs team in franchise history. And the core structure of the team is entirely intact, with one massive question mark- the goaltending.
The Leafs’ all-new tandem of Matt Murray and Ilya Samsonov have a hard battle ahead of them: winning over a Toronto market where skepticism of their collective abilities is high. With new goaltending coach Curtis Sanford at the helm, the hope is that Matt Murray returns to form and Samsonov rediscovers that natural talent that led to him being a first-round pick.
That said, even Jack Campbell’s strongest supporter can say that the Leafs’ goaltending last season was abysmal for large swaths of the season, Campbell’s save percentage dipped below .900 for weeks at a time and Petr Mrazek was a complete non-option from day one, so if the new tandem can collectively put together a league-average save percentage, then there’s an argument to be made that the Leafs will challenge for the President’s Trophy, much less first in the division. At worst, they should be just as good (in terms of where they fall on the standings) as last season.

Notable Additions: Alex DeBrincat, Claude Giroux, Cam Talbot
Notable Departures: Connor Brown, Chris Tierney, Matt Murray
Offensively, it cannot be denied, Ottawa got better. The sudden emergence of Anton Forsberg last season and the acquisition of Cam Talbot give the Senators a stability between the pipes they haven’t seen in a long time. The one major question mark is the defence, but to be fair, the Leafs made the playoffs numerous times with Nikita Zaitsev playing a prominent role in their defence corps, so it’s not an impossible feat.
Even removing Zaitsev from the equation, the current projected lineup of the Senators actually call to mind memories of the 2016 Leafs: a youth-infused speedy offense with a healthy mix of veteran presence, a goalie with a track record of success, and a defence that resembles swiss cheese. This new and improved Senators squad will probably make the biggest jump in the standings and take their first steps into the playoffs.

Notable Additions: Pavel Zacha
Notable Departures: Patrice Bergeron, Erik Haula
It’s hard to see a world where the Boston Bruins are not in the playoff picture. In fact, it’s almost impossible. So impossible in fact that until it happens, it defies belief.
Patrice Bergeron, as of this moment, may not return and hang up the skates, but even if he re-signs for one more year, the Bruins are in for a rough road. Brad Marchand, Charlie McAvoy and Matt Grzelcyk will all miss a significant amount of time to start the season (as much as two months for all three) which will put them behind the 8-ball until Christmas at least.
Add on the head-scratching decision to fire Bruce Cassidy in favour of bringing on Jim Montgomery as head coach, and you have a potential recipe for disaster, but the Bruins have always been a resilient team, and as was said off the top, until they actually falter and miss the playoffs, there’s no reason to assume the long-awaited regression starts now.

Notable Additions: David Perron, Ville Husso, Ben Chiarot
Notable Departures: Olli Juolevi, Marc Staal
Whether it was Yzerman’s decision or pressure from above, it appears the rebuild phase is over in Detroit, they paid top dollar to bring in a solid top-six winger in Perron, but they also brought in an untested goaltender with an extremely short track record of success, the second move like this in as many years, and he one-upped on the Alex Nedeljkovic gamble by giving Husso term and nearly $5 million per season. He also signed, statistically, one of the worst defencemen in the NHL, Ben Chiarot, to term and a cap hit that makes the deal almost immovable once the league realizes how grossly overrated Ben Chiarot is.
The team’s young stars like Lucas Raymond and Mo Seider will definitely take another step, and while Husso will surely be an improvement on Thomas Greiss, there are still many questions as to if he can be a true starter long-term. Ultimately, while Detroit will take a step forward, it will probably not be enough to secure a playoff spot, unless it’s a second wildcard position.

Notable Additions: Matthew Tkachuk
Notable Departures: Claude Giroux, Jonathan Huberdeau, Mackenzie Weegar, Mason Marchment, Frank Vatrano
Did any team lose more than the Florida Panthers? After being swept by their biggest rivals, the President’s Trophy-winning coach was fired. The immediate short-term future of the team was traded for rentals who walked, along with two other top-9 forwards, and most recently, their franchise leading scorer and a top pair defenceman were traded (along with more futures) for a talented player, yes, but one who is also the fakest tough guy in the league, lest we never forget the diaper-filling tantrum Tkachuk threw after Muzzin’s puck flip.
To top it all off, they brought in perennial underachiever Paul Maurice as head coach and didn’t have the cap space to address a sudden lack of depth at both forward and defence. Florida is a prime candidate for huge regression, especially once you factor in the unusual trend Sergei Bobrovsky has had throughout his career where he tends to alternate good performances and bad performances season by season. A talented top line will keep them out of the basement, but the lack of depth and a coach with inferior systems will hurt them immensely.

Notable Additions: Juraj Slafkovsky, Kirby Dach, Mike Matheson, Evgeni Dadonov
Notable Departures: Jeff Petry, Alex Romanov, Shea Weber’s contract
Montreal did improve by virtue of adding a top-six winger, a first-overall pick and a former top-three pick,they’re still far from being a good team. Their defence, on paper, took a big step back, and between the pipes, with Carey Price doubtful to ever return, they are still just as lost as they were throughout last season.
The Canadiens are still a rebuilding team at the end of the day, and their young players need to play through hardship in order to improve, so while they are perhaps overall a step better than they were last season, they are still far from contenders.

Notable Additions: Eric Comrie, Ilya Lyubushkin
Notable Departures: Colin Miller, Mark Pysyk
Buffalo is still Buffalo, outside of a legitimate option for a starting goaltender and the hard-hitting Lyubushkin, their roster is basically unchanged. However, like Montreal, they are still a rebuilding team, and should be content to tank away another season in the hopes of further bolstering their prospect pool.
There we have it, far-too-early predictions for the Atlantic Division, be sure to bookmark this page and revisit this once it turns out to be entirely wrong!
More From TheLeafsNation.com: