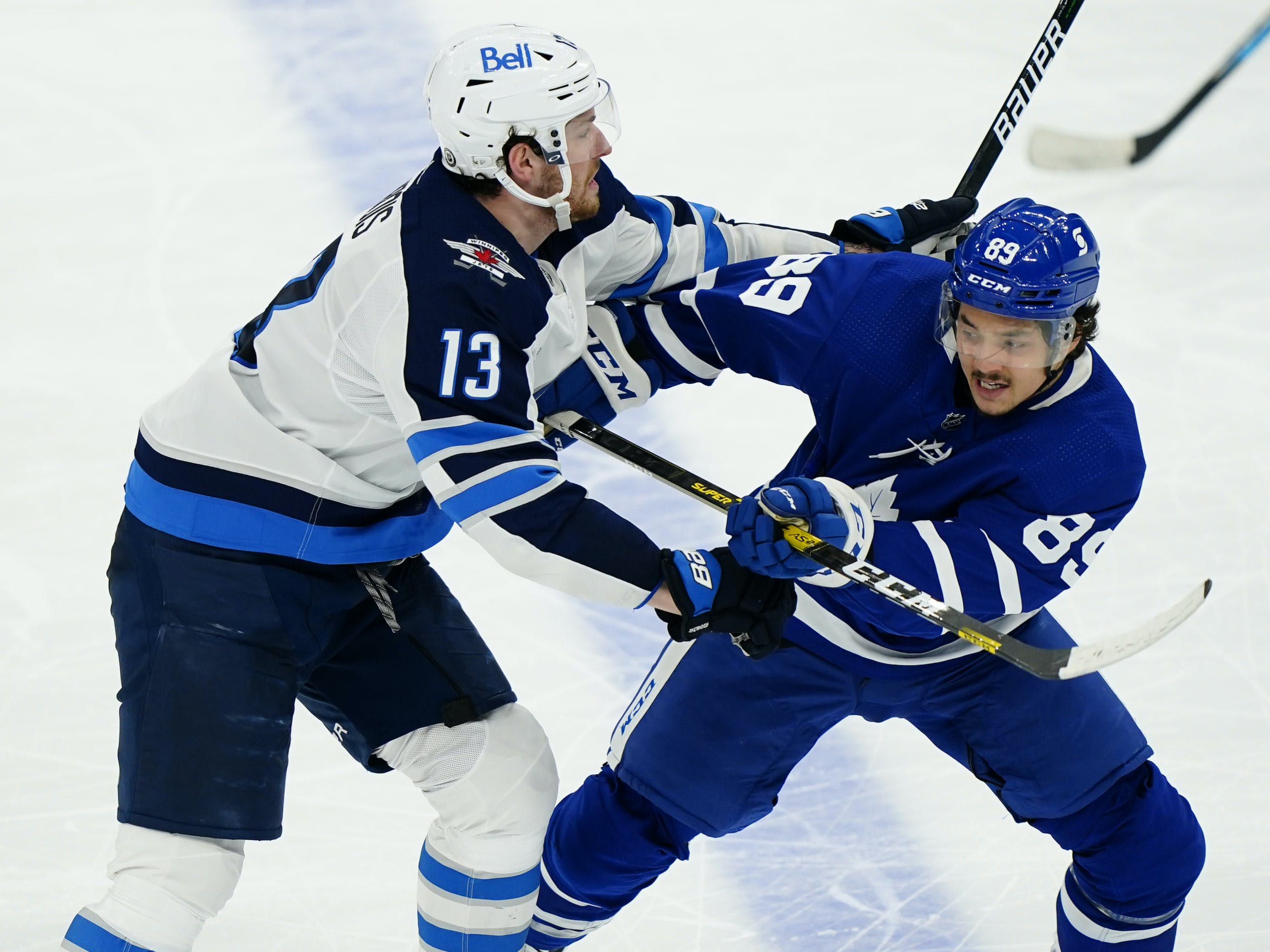 By James Reeve
4 months ago
The 2022-23 season is an important one for Toronto Maple Leafs prospect Nick Robertson, who is determined to cement his place on the NHL roster and avoid spending more time in the AHL with the Toronto Marlies.
Hopes have been high for Robertson ever since he was selected in the second round (53rd overall) of the 2019 Draft, and this season could see him finally make the jump up to the NHL on a full-time basis. Last season, Robertson demonstrated he is more than capable in the minors with 16 goals and 28 total points in 28 games and earned himself a 10-game stint with the Leafs.
Robertson was played sparingly during his spell in the NHL, scoring his first goal in the league in a 6-4 loss to the Vancouver Canucks in March, registering no further points while averaging just 10:16 of ice time. While his sample size has been extremely small, Robertson’s talent and performances in the AHL should give the Leafs enough confidence to give him a longer look from the start of the season.
Robertson is a high-skill player and if the Toronto Maple Leafs want to see him succeed sooner rather than later, then he needs to be given a role in the top six alongside other skilled players. The ideal partners could well be regular second-line linemates John Tavares and William Nylander.
Last season, Tavares and Nylander were almost inseparable and put up some impressive numbers, scoring 27 and 34 goals respectively and playing close to a point-per-game across the season. Their regular partnership primarily involved Alex Kerfoot in the left wing position, where the trio had a positive Corsi rating of 52.18% and xGF% of 52.25.
While these three were regularly partnered, it may not be the best solution for the team moving forward. In fact, Tavares and Nylander together posted better Corsi (57.39%) and xGF% (60.68) when Kerfoot was not their linemate. In a brief spell playing alongside the pair (32:28), Robertson appeared to have a better impact. As a trio, Robertson, Tavares and Nylander had a Corsi rating of 57.33% and xGF% of 59.29.
It’s a very small sample size, but the impact of placing Robertson on the second line instead of Kerfoot is clear to see. If Robertson is given a greater opportunity to impress this year, he may well do that if he has Tavares and Nylander as regular linemates. Having a second line full of skilled players will be a strong compliment to the team’s top line, with stars Auston Matthews and Mitch Marner leading the way alongside the strong forechecking of Michael Bunting.
If Robertson is to be successful with the Leafs this season, he can’t be given third or fourth-line minutes, limiting his chances of playing his game and getting chances in front of the net. He was limited to that type of role during his 10 games last season, which shows in his lack of points production. In his Draft+1 year, Robertson racked up an astonishing 55 goals and 86 points in just 46 OHL regular season games with the Peterborough Petes, and the Toronto Maple Leafs will surely believe that they can tap into this genuine talent.
There will of course be doubters about what Robertson is capable of achieving at the NHL level, given his slight frame at 5-foot-10, 176lbs, but his skill is clear to see and he should have no issues translating that to the top level if he is given the right cast around him and a genuine opportunity to shine early on. Allowing him a chance to grow into the league at the start of the season, when there is less urgency on picking up wins to chase down a playoff spot, will benefit him greatly.
It’s difficult to bed a player in later in the season, especially if he is partnered alongside a settled duo such as Tavares and Nylander. However, getting him on the ice early on and playing alongside those two truly could be the making of the team’s second line and give them further flexibility further down the roster. Kerfoot’s raw production is fine and did enough to help the team to a strong, record-breaking regular season, but having a player of his quality in the bottom six could strengthen the team even greater while giving Robertson his time to shine.
More from TheLeafsNation.com: