Meet your Toronto Six forwards for the PHF’s Season 7 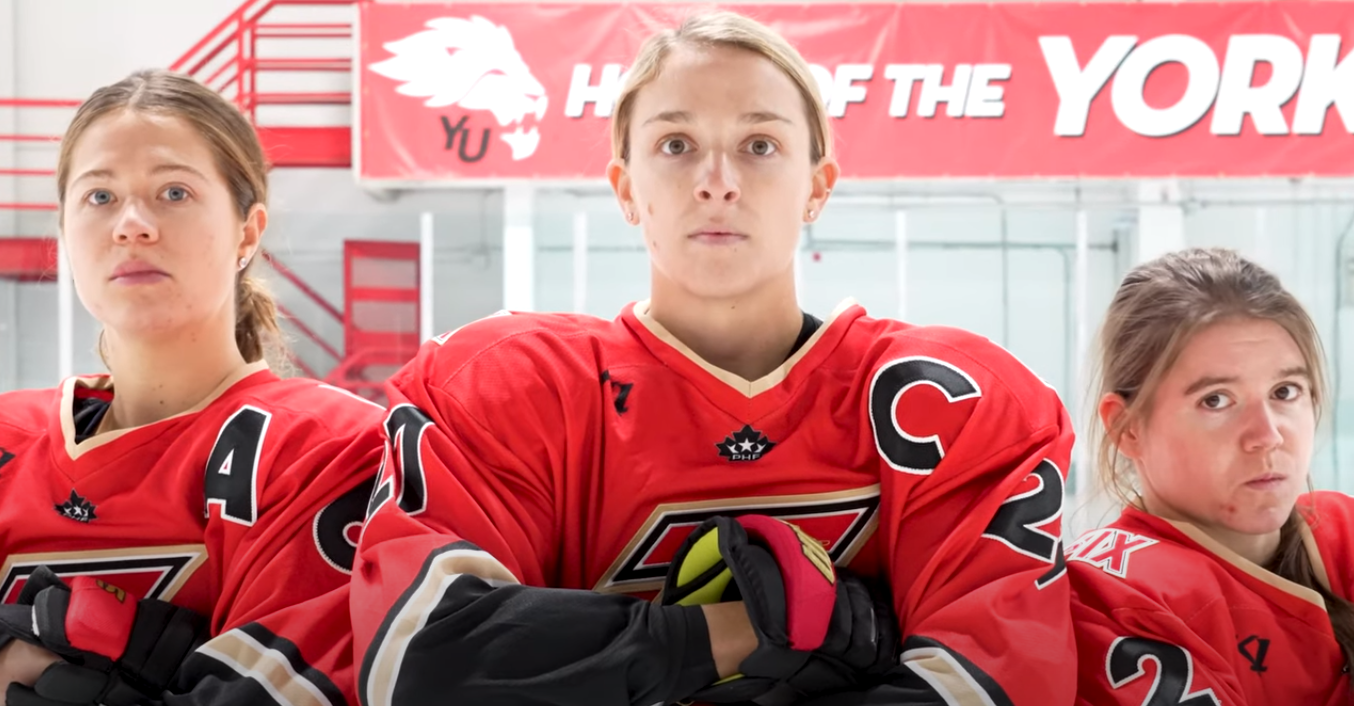 By Ryan Hobart
1 year ago
Tomorrow, the Premier Hockey Federation, or PHF (formerly the National Women’s Hockey League, or NWHL), gets its 7th season started. For the Toronto Six, this is just season 2 of their franchise of professional hockey for women and transgender players. I had a blast covering last season, recapped yesterday in our review of their upcoming season.
We’re going to cover the team in an order that makes sense to me, simply by their number.
Note, Taylor Woods, one of my favourites from last season, is listed on the roster as a forward, but she played defence all last year and is shown as a defender in their promotional video announcing the captains for this year:

Profile on Elite Prospects
Baeres was one of Toronto’s three first round picks in the just-passed 2021 entry draft, where she went 3rd overall. The rookie will be making her professional debut, after just finishing four years at Boston College.
As a two-way forward, Maegan will probably feature in the bottom six of Toronto’s lineup, and probably play an important penalty killing role.

Another 2021 draft pick, Marino was Toronto’s third round selection. Being a rookie coming out of Robert Morris University, there isn’t a lot to know about her just yet. I’ll simply reiterate what I said previously:

She scored only 11 points in her 3 seasons there. She stands a little taller than average at 5’9″. While depth is certainly an important role, her lack of production makes this a curious selection. However, the Six must have something planned with this selection that we’re not privy to. There’s very little you can get from just points per game.

Profile on Elite Prospects
The scoring star for Toronto, who won Season 6 MVP for her dominant performance in the bubble season, Grant-Mentis is an exciting player to watch. According to Their Hockey Counts, she tied for the league lead with teammate Sarah-Eve Coutu-Godbout, and led the league all by herself for goals scored. That was her second pro season after playing college hockey with Merrimack.
Having Grant-Mentis back playing for Toronto is excellent. It’ll be interesting to see where she slots into the roster, whether she plays on the first line as she did to finish the season, or the second line where she played to start. It’s kind of a Matthews/Tavares situation where you have two really great centers, it’s probably best to keep them in the middle driving their own lines.
Regardless, I look forward to another MVP-hopeful campaign for Grant-Mentis.

Profile on Elite Prospects
One of Toronto’s two second round picks in the 2021 draft, MacDonald is a Nova Scotian who looks the part. She played her college hockey at Princeton, who were on their way to the NCAA championship game in 2020 but the season was unfortunately cancelled due to the pandemic.
I’m curious to see how the bottom six for Toronto shakes out, certainly there are a lot of rookies on the team to fit in somewhere, and a youthful, energetic pair of bottom six lines could be really fun.

Profile on Elite Prospects
Boquist is a returning player from Season 6 for Toronto, who brought an excellent speedy presence to Toronto’s top line before she had to stop playing the rest of the season for reasons unknown (probably injury). That was when Grant-Mentis was promoted to the top line. Anyway, Boquist is a great player and will be an important presence for Toronto this year in the top-six. She can play anywhere in the lineup but probably fits best back where she finished last season, on the top line with Darkangelo and E. Woods.

Profile on Elite Prospects
Last year’s rookie, Amy Curlew is a fun, small, and speedy winger, which makes her a favourite player of mine instantly. That’s my soft spot, I’m happy to admit it. She scored 4 points, all assists, in her first season, and floated in between third and second line roles as the season went on.
In Toronto’s preseason game, Curlew started the game on the first line with Darkangelo and E. Woods. I’m not sure if she’ll stay in that role (or even if she stayed in that role that game as I wasn’t able to watch). Curlew has the potential to be a star playmaker in the league with some seasoning, and I’m really excited to see if she can make that jump in her sophomore pro season.

Profile on Elite Prospects
O Captain, my Captain! Shiann Darkangelo is the big, effective center anchoring Toronto’s top line. She’s a humble and hard-working person, a perfect leader for this young team, franchise-wise and personnel-wise. She’s been captain since last year’s inaugural season, and filled the role excellently. She had 4 assists in the 7 games Toronto played, including the Isobel Cup final.
This will be Darkangelo’s sixth season in professional women’s hockey, spread across time in both the CWHL and the NWHL, now the PHF, including time on both the Buffalo Beauts and the Connecticut Whale.

Profile on Elite Prospects
Taylor Weidenfelder, née Day, is a scoring journeywoman in women’s hockey, having played in the German league, the PWHPA, and now the Toronto Six. She will surely be a player who adds offensive threat, whether that will be near the top or bottom of the lineup.
She joins Toronto with former University of Toronto and PHWPA teammate Cristine Chao, who we’ll look at tomorrow in a defenders and goalies preview.

Profile on Elite Prospects
Emma Woods is another special player for Toronto, and probably one of the best playmakers in the PHF. She will almost certainly play alongside Darkangelo on the top line, as she did all throughout Season 7.
Last year was her first year in the NWHL, but she played two years previously with the CWHL in China for the Vanke Rays and then Kunlun Red Star, and then a year in Sweden, where she played with teammate Brooke Boquist. Woods was an offensive dynamo and contributed to an excellent Toronto Six powerplay in Season 6.

Profile on Elite Prospects
Cava is a relative veteran in this sport, coming from 5 pro seasons, including one season with the Toronto Furies of the CWHL back in 2016-17. Since then she’s been in Sweden, splitting time between MODO, Brynas and Lulea’s women’s hockey clubs. This will be her first season in either the PHF.
She played her college hockey at Connecticut, and she happens to wear my favourite number, #86, so I’m definitely a fan already.
Cava is another player who we can expect to have a depth scoring role, which is exciting. It seems Toronto has a really good balance of offensively gifted and defensively responsible forwards to build an effective roster.

Profile on Elite Prospects
Last on the roster, both in number and in time spent as a member of the Six, but definitely not least, we have the very recently added Tori Charron. She is unique in that she hasn’t been playing pro hockey at all. Somehow coach Mark Joslin scouted her out and offered to bring her onto the team. She was a top scorer in her college career with Norwich, but that was the Division III level. She certainly will have the offensive drive, but her skill level relative to the pros on the team with experience at this level is yet to be defined. I’m really curious to see how she fits in.

I’m getting really excited about the season, which starts TOMORROW at 7pm. As mentioned in yesterday’s post, you can watch in the US on ESPN+, and anywhere else, on Twitch. You can also get tickets to the game HERE.
Being a fan of the Six was so much fun last season and I hope that this year you’ll join the bandwagon!
Uncategorized
Recent articles from Ryan Hobart