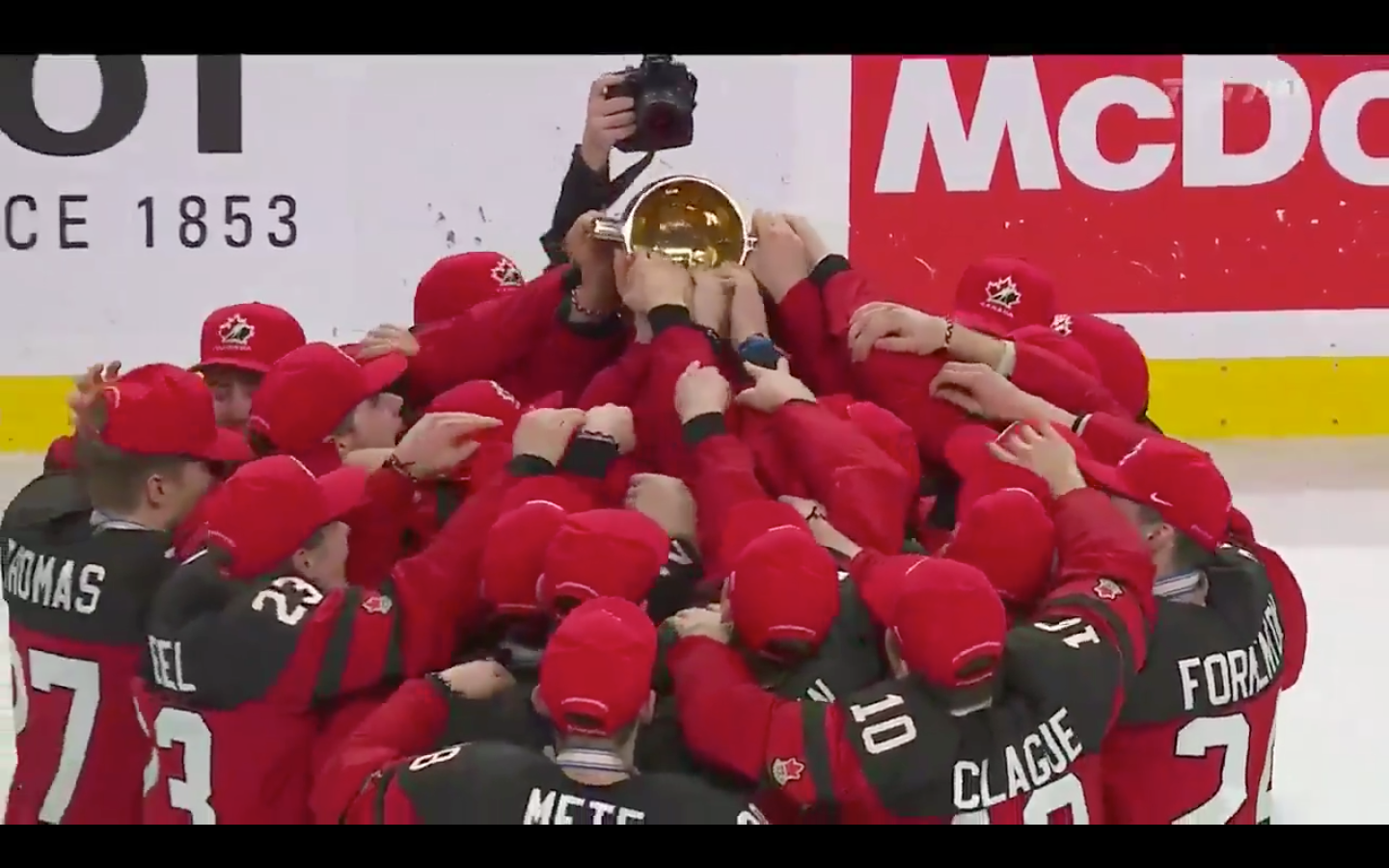 Photo credit: TSN Sports
By Jess Pincente
5 years ago
Comments
They did it. Team Canada captured the IIHF U20 gold medal.
After losing in the finals to the United States just one year ago, Canada pushed past Sweden to claim the gold medal at the 2018 World Junior Hockey Championship.  The hero this year was Tyler Steenbergen who tallied his only goal of the tournament in the final minutes of the gold medal matchup.
It’s times like these where the hockey just speaks for himself.  The Canadians were deadlocked with Sweden through most of the game but pulled away before it was too late.
The player’s reactions after the final buzzer are what truly engrains these moments into the hearts of Canadians – there’s something about this tournament that is so special.  The crowd at the Key Bank Centre tonight was packed with red and white sweaters, as almost 16 000 Canadian fans came to cheer on their country in the finals.
Advertisement
Ad
Advertisement
Ad
To avoid any more emotional statements, let us relive the golden game once more.

The first period was packed with chances on both sides, but neither team would gain the edge until later in the second. Carter Hart stood on his head for Team Canada the entire tournament, and without him today, Canada would not have won this game.  Period.
Hart finished the tournament with a 5-0-1 record, a 1.81 GAA and a 0.930 save percentage. He was one of the main reasons that Canada made it to the gold medal game.
Oh, and Sweden did this?

Team Captain Dillon Dube would strike first for Canada in the second period, scoring a goal off this amazing shot to put the Canadians up 1-0:

Dillon Dubé breaks in and rips one.

The Swedish shorthanded dominance continued again today, as Tim Soderlund would tally Sweden’s only goal of the game on Canada’s second powerplay of the evening:
Advertisement
Ad
Advertisement
Ad

Canada and Sweden found themselves deadlocked yet again at the end of the second, heading into the intermission tied at 1.

The third period of this game may have one been one of the best periods of hockey I’ve seen in a while.  And yes, I’m only saying that because Canada won.
Both teams had great chances for the duration of the period, but it was Tyler Steenbergen who scored the goal to regain the lead for Canada with 1:40 left to play in the game.  Here’s the goal that sent a large part of the country’s population into cardiac arrest:

Tyler Steenbergen with a beautiful redirection to put Canada up front with less than 2 minutes left. Wow. #WorldJuniors pic.twitter.com/aAx1yn8SGv

Alex Formenton would score the empty net goal to seal the deal for Canada with just over a minute to play in the third.
That did it for the Canadians who capture the WJC gold medal for the first time since 2015.
Advertisement
Ad
Advertisement
Ad
Way to go, boys!

Sign in the crowd: Ikea is overrated too! But the meatballs are good.

A Swedish player threw his silver medal over the glass and this guy now has a souvenir pic.twitter.com/HPjM5mHrev