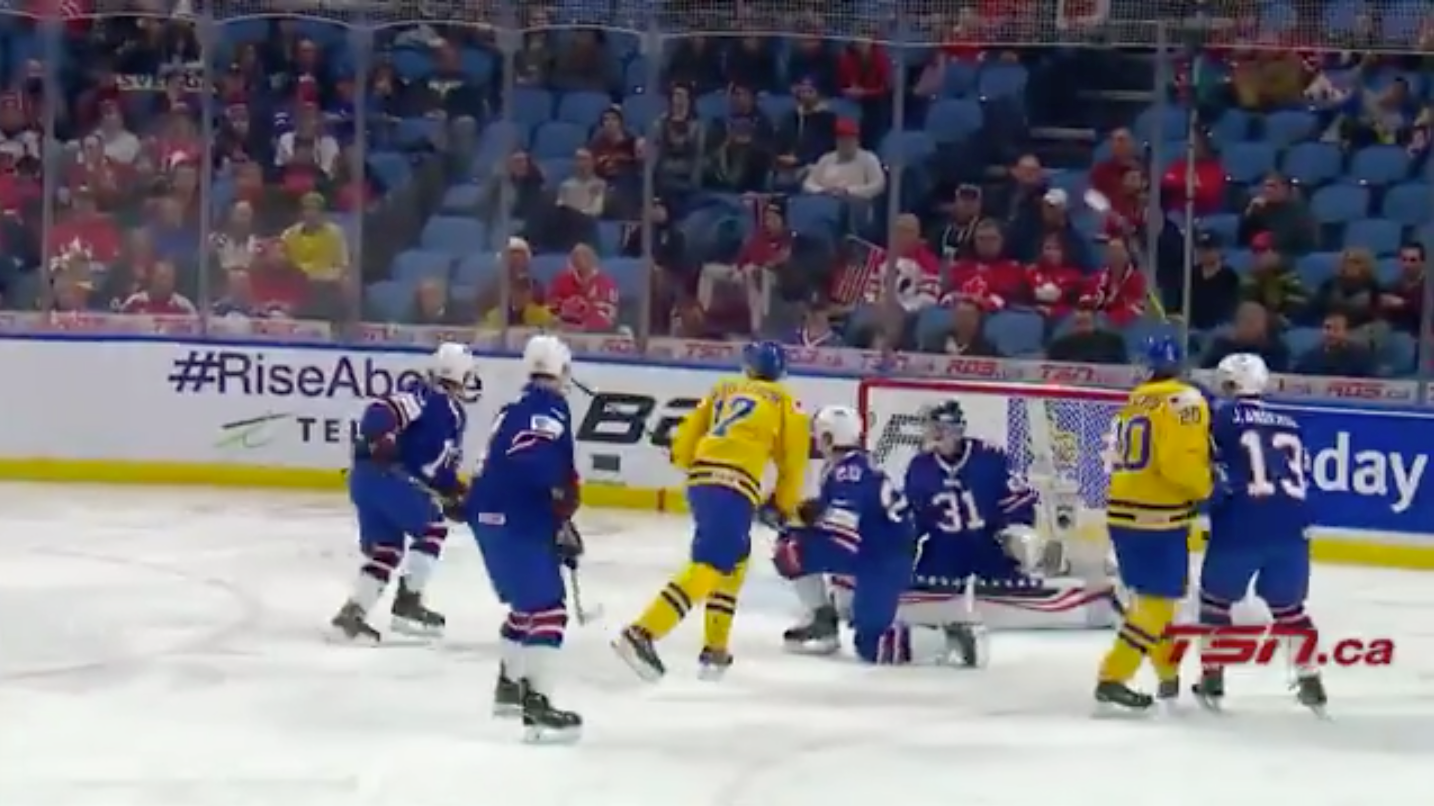 Photo credit: TSN Sports
By Jess Pincente
5 years ago
Comments
Much to the despair of Joseph Woll, Timothy Liljegren and Team Sweden have advanced to the gold medal game of the 2018 World Juniors.
Woll was pulled midway through the third period after allowing two back-to-back shorthanded goals on the same USA power play. His performance in the third period left much to be desired, especially considering the gravity of the situation.  The 4-2 Sweden victory only came to them in the third period, and it seemed that the Americans had a hold on the Swedes until the fourth goal.
On the other hand, Timothy Liljegren had another great game for Sweden.  Though he was held off the scoresheet again, he has seemingly grown comfortable on Sweden’s blueline.  It will be interesting to see what he can do against Canada in the gold medal matchup given the strength and depth of the two colliding teams.
Yesterday’s semifinal matchup went as many predicted it would.  Sweden has a lot of talent this year, and the Americans struggled to keep up.  Joseph Woll’s subpar performance in the third wasn’t ideal, but the Swedes took advantage of his slip-ups and gained control of the game.
Advertisement
Ad
Advertisement
Ad
Here are the highlights from the semifinal matchup:

Liljegren had yet another solid showing for the Swedes yesterday.  He’s improved significantly over the course of the tournament, fitting in well on his team’s talented defense core.  He has gained confidence on the blueline, holding his own against his opponents defensively but also jumping up into rushes and creating chances offensively. Though he somehow was not credited with an assist on this play, here is his beautiful stretch pass that led to Sweden’s second goal of the game:

Liljegren single-handedly opens up this game. Skates himself out of trouble then makes a ridiculous stretch pass to spring the 2-on-1. https://t.co/xhXMs3Z2l4

Liljegren does what he does best – dancing away from the opponent’s forecheckers and using his great vision to start the breakout.  His skills are a key piece of Sweden’s blueline, and Liljegren definitely has not disappointed this year.

Joseph Woll had a great showing in the first two periods of yesterday’s game.  His third-period performance, though, was not good.
Advertisement
Ad
Advertisement
Ad
Despite the third period collapse, Woll made some pretty good saves early on that helped the Americans stay alive in the game.

What a save by Woll pic.twitter.com/24lpgT5C5a

Woll was pulled in the third period after allowing two back-to-back short-handed goals.  The move is understandable from an American perspective.  Here’s the fourth Swedish goal that led to Woll being yanked from the net:

And Joseph Woll is getting picked apart now. Sweden with 2 shorthanded goals and are up 4-0 #WJC2018 pic.twitter.com/PsmUQ4Upf0

Woll has let in several soft goals over the course of the tournament.  He can be spectacular at times but he definitely needs to work on his consistency – if he can make those acrobatic saves and continue to play well for a full 60 minutes instead of just a few periods, things may be different for the USA heading into the final day of the tournament.
With the NHL out of the Olympic conversation, there is a possibility that Woll and/or Oettinger will join the USA Olympic team in Pyeongchang.  After his performance yesterday, it will be interesting to see if USA Hockey opts to take one or both of the World Juniors tandem to the Olympics.
Advertisement
Ad
Advertisement
Ad

With their victory over the USA yesterday, Sweden advances to face Team Canada in the gold medal game.  Both teams are deserving of the gold this year, dominating their opponents in both the preliminary and the medal rounds of the tournament.  The final matchup of the tournament will take place at 8 pm tonight.
The USA will face the Czech Republic for the bronze at 4 pm.  The Czechs battled hard to make it to the semifinals and certainly won’t go down without a fight.  The USA has chosen Woll as their starter this year, but his showing yesterday likely doesn’t leave much confidence in his play. Will Woll return to the net tonight in the bronze medal matchup, or will Oettinger get the start for the USA in the final game of the tournament?
Advertisement
Ad
Advertisement
Ad