Advertisement
Ad
Tournament in Review: Liljegren and Woll both earn medals at the 2018 World Juniors 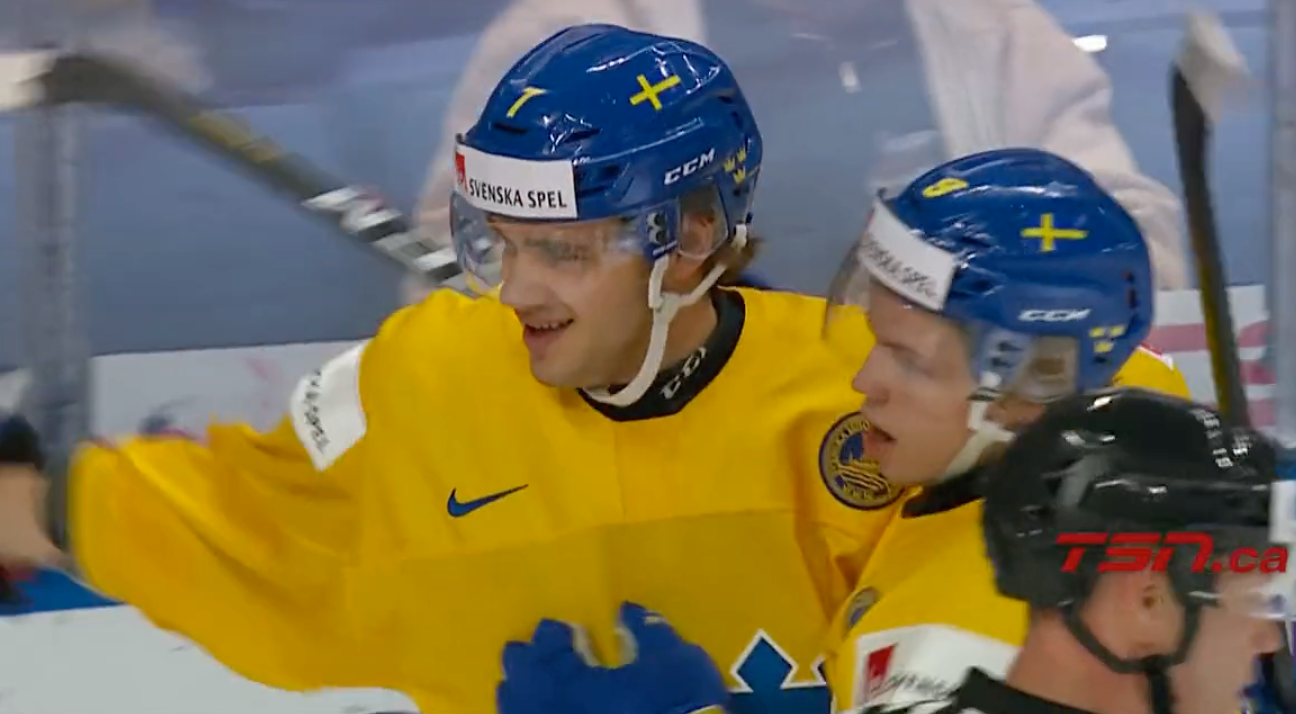 Photo credit: TSN Sports
By Jess Pincente
5 years ago
Comments
With the final buzzer of the 2018 IIHF World Junior Hockey Championships having sounded just a few short days ago, it’s time to examine the performances of the two participating Toronto Maple Leafs prospects.
Timothy Liljegren had a great showing at the tournament for Team Sweden, demonstrating his dynamic style of play through seven games with his team.  Joseph Woll earned himself the starting goaltender position with Team USA, but after a weak performance in the semifinals was withheld from the American bench in the bronze medal matchup.
Both Liljegren and Woll had some ups and downs at the World Juniors this year.  Liljegren, the WJC rookie, is eligible to return to Team Sweden for next year’s tournament.  His strong performance this year will only improve by 2019 as he continues to grow into his current role on the Toronto Marlies blueline.  Woll and his team at Boston College are having quite the season, sitting atop the NCAA’s Hockey East division. Woll partook in his second WJC tournament this year, but his performance was not consistent enough to warrant significant praise from Leafs fans.
Advertisement
Ad
Advertisement
Ad
Team USA and Joe Woll took home the bronze medal while Liljegren and the Swedes took home silver.  All in all, it was a strong tournament for the two Toronto prospects who dominated (at times) and fit in well amongst their respective teams.

Here are a few highlights from Timothy Liljegren’s play at this year’s tournament:
Liljegren made quite an impact on the Swedish blueline at the tournament.  His offensive abilities were on full display over the course of seven games, though he only managed to gather two points in that time span.
Liljegren certainly improved over the course of the tournament.  He seemingly grew more and more comfortable on IIHF ice with each passing game and he continued to hold his own on the blueline through the medal round.  Liljegren averaged 17:39 minutes of ice time per game sitting on Sweden’s second defensive pairing. It’s fairly hard to stand out when you’re competing with the likes of Rasmus Dahlin, but Liljegren’s role aided in the depth of Sweden’s roster as he helped spark offense for the team on many different occasions.
Advertisement
Ad
Advertisement
Ad
His rushes and stretch passes were the most impressive aspects of his performance at the tournament.  His showing in Buffalo was a pleasant surprise, and Leafs fans should be excited about a future with Liljegren on the Toronto blueline.

Here are a few stunning highlights from Joseph Woll’s time as Team USA’s goaltender at the tournament:
Though his highlight reel is fairly impressive, Woll’s stats seem to point in another direction.  An 88.60 save percentage places him 9th amongst goalies who played at least 60 minutes at the tournament.  His inconsistent play resulted in a few bad goals, including these ones:

And Joseph Woll is getting picked apart now. Sweden with 2 shorthanded goals and are up 4-0 #WJC2018 pic.twitter.com/PsmUQ4Upf0

Sholokhov fires a backhander and ties it 1-1 pic.twitter.com/oC9Ku1yX9Z

The mix of very good and very bad leaves a lot of confusion surrounding Woll and his future.  His excellent lateral movement and flexibility combine to form a dangerously good goaltender, but one could imagine his low/mid danger save percentage is astoundingly subpar.  Looking ahead, Woll will need to improve on his game-to-game and period-to-period consistency.
Advertisement
Ad
Advertisement
Ad
Woll definitely has potential to develop into a great goaltender.  He has the underlying talent to be able to succeed as an NHL goaltender, but let’s not forget – inconsistent play can actively work to remove all sense of trust between a goaltender and his team.  Woll still has two years of NCAA eligibility to work and improve upon his play and he will likely benefit from an extended development period, whether that be in the NCAA or the AHL with the Toronto Marlies.

Looking ahead, future opportunities loom in the horizon for both Woll and Liljegren.
Advertisement
Ad
Advertisement
Ad
According to several reports, Joseph Woll could be heading to Pyeongchang to represent the USA at the 2018 Olympic Winter Games.  This would be quite an impressive feat for the 19-year-old goaltender, but his spot is not secured.  Team USA announced their roster on Twitter on New Year’s Day with the indication that two more goalies will be added at the end of January.  A spot on the Olympic team would be certainly ideal for Woll who would gain another opportunity to prove himself, but this time on a bigger stage.  It was clear, though, that USA Hockey was not satisfied with his performance in the semifinals.  It will be hard to tell whether or not Woll will earn that spot at the Olympics, but given the strange nature of USA Hockey as of late, it would not be surprising to see him make the final roster.
Timothy Liljegren will head back to Toronto to continue his run with the Marlies.  Liljegren has earned himself 9 points in 17 AHL games this season and will continue to further develop and adapt to North American hockey upon his return to the Marlies.
Advertisement
Ad
Advertisement
Ad
Though the Leafs only had two prospects at this year’s tournament, both players left with a medal around their neck.  Some strong performances and few questionable performances combined for an exquisite two weeks of hockey, and the successes of Liljegren and Woll at this year’s tournament should be appreciated by both the Toronto Maple Leafs organization and their fans.