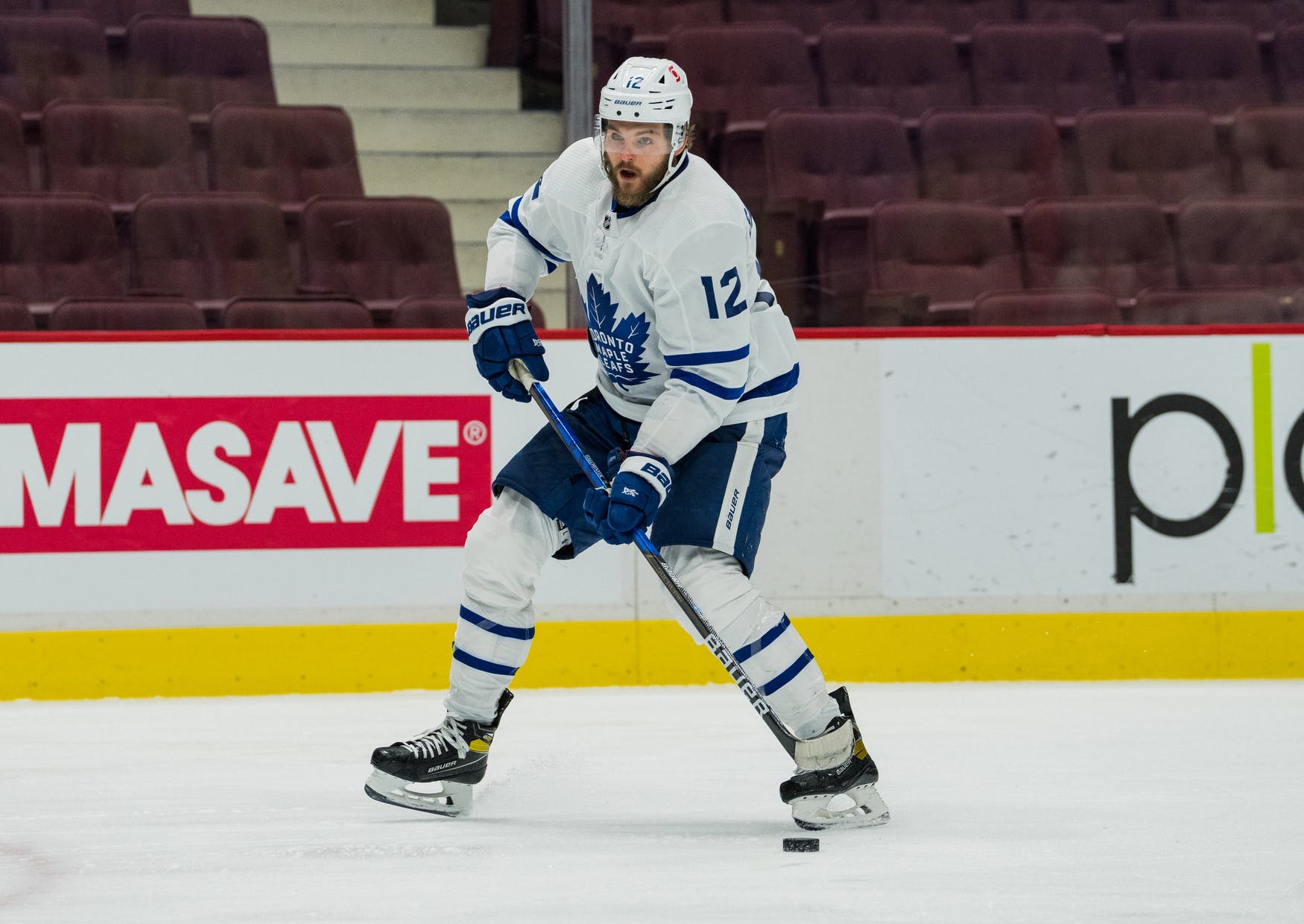 Photo credit: © Bob Frid-USA TODAY Sports
By Michael Mazzei
1 year ago
Comments
Breaking: The Leafs’ power play is still struggling to find some consistency.
It feels like clockwork each time their struggling man-advantage unit gets brought up on each broadcast with the commentators going over how the team has only scored three goals in that scenario since March 9th. To put into perspective how long it has been since the Leafs’ power play was dominant, @Travis Boyd and @Jimmy Vesey were still on the team when @Auston Matthews scored a PP goal that marked the beginning of this aforementioned drought.
Earlier this month, some of the TLN staff and I went over some ideas on ways to improve Toronto’s power play (which was one for 38 at that time). To summarize my initial idea: the Leafs need to determine a combination that works and use their top unit for as long as possible based on trends suggesting that is the best method. I have since come up with two ideas that might just get the PP back on track heading into the playoffs. One of these ideas is more realistic while the other is a bit chaotic, but both have the potential to provide a spark that the team desperately needs to get the man advantage back to its preeminent ways.
Advertisement
Ad
Advertisement
Ad

Realistic Change: Swap Rielly for Sandin on the top unit

Since @John Tavares signed with his hometown team in 2018, the Leafs’ top unit has primarily been him with Matthews, @Mitch Marner, @William Nylander, and @Morgan Rielly. That last player has no doubt proven to be a reliable offensive weapon since being drafted nine years ago, but it is becoming clear that a crucial tool is missing from his arsenal that could have made him even more effective: a one-timer.
Now it is true that slap shots from the point are not the most reliable way to score a goal given how the percentage of chances that go in are slim, but part of what makes a power play effective is having a defenceman implementing a one-timer that can be either deflected or create a rebound, leaving penalty killers scrambling to figure out who to defend. When Rielly goes for the one-timer, the puck will usually hang low on the ice and barely raise up. On the rare chances that it hits the target, the goalie will likely make the save and the only time it goes in is due to a fortunate bounce such as the one below.
Advertisement
Ad
Advertisement
Ad

Because the effectiveness of Rielly’s shot is limited, he is likely going to give the puck to either Matthews or Marner instead who will both have better odds of creating a dangerous scoring chance. Opposing teams have long recognized this and that makes the success of the Leafs’ power play contingent on one of the aforementioned players generating the offence. So when that option gets taken away and Rielly has to shoot, it’s generally from a low percentage area and has minimal coverage since the opponent knows there’s little chance it will turn into a goal.
His playing time so far this season may have been limited, but @Rasmus Sandin has been a breath of fresh air. He has been moving the puck well, has strong offensive vision, and (most important) possesses a good shot that can make him a threat from range. These traits have been prevalent in his game throughout his development and have played a factor in why he is now on the cusp of becoming an NHL regular.
Advertisement
Ad
Advertisement
Ad

D Rasmus Sandin rips a slap shot from the point and it gets through the traffic to give the #Marlies a 1-0 lead. That's Sandin's fifth goal of the year. @TLNdc #Leafsforever pic.twitter.com/H01tJyo7ka

Leafs prospect Rasmus Sandin has his first goal of the day to tie things up for 🇸🇪! pic.twitter.com/rfwmnGOcRZ

Dmytro Timashov rips a shot home to give the #Marlies a 3-2 lead. Assist: Sandin, Bracco. pic.twitter.com/e8RqfGEoAz

That last clip in particular is important because not only did Sandin’s one-timer hit the net, it raised high above the ice and into the top corner. Keep in mind that this clip was from over a year ago and he has since bulked up so it is entirely possible that Sandin may have a cannon of a shot in his toolbox.
By swapping Rielly for Sandin on the top unit, it suddenly gives them another option for who should put the puck on the net. It will force opponents to respect his shot more and they overcommit in trying to defend Sandin, which could lead to him passing the puck to a wide-open Matthews/Marner who can then create more havoc in front. This unpredictability is what will make the Leafs’ power play more successful because the game plan with Rielly is too easy to solve and there have not been many alterations to the scheme apart from Matthews and Marner swapping spots. During Saturday’s game, Sandin played briefly on the top unit and one thing that stood out is how he was effective in spacing out his opponents to make more room for his teammates to move towards the net. I think with more reps and practice, a top unit with Sandin could do a lot better.
Advertisement
Ad
Advertisement
Ad
Sheldon Keefe told the media on Tuesday that he expects Sandin to appear in most of the Leafs remaining eight games down the stretch so he will be given every opportunity to succeed. One of the ways he can thrive is through an extended presence on the power play so it is time for him to get a longer look alongside the Big Four.

Chaotic Change: Use five forwards on the top unit

If the best power plays need to have at least one player at the point who has a good one-timer, then perhaps the Leafs need to look towards a more unique top unit that would satisfy that criteria: going with five forwards.
@Alex Galchenyuk came to Toronto with his career in desolation, but he has since found new life and is playing like the 30-goal scorer he was just five years ago. That aforementioned campaign saw him score nine goals on the power play with a lot of them being off one-timers or high-percentage shots. It has been one of his biggest assets throughout his career and it has led to him getting long looks on Toronto’s PP unit.
Advertisement
Ad
Advertisement
Ad

During Matthews’ brief stint on the sidelines a few weeks back, Galchenyuk got some reps on the top unit and did not look out of place in large part due to his shot. In spite of not scoring on any of those chances, Galcnehyuk played well taking over Matthews’ role as the finisher on the unit and it has likely earned him more chances in the future should there be another opening. Even when he was on the second unit, he has shown to move the puck quickly and effectively to make life difficult for defenders. All of which is to suggest that he tied with @Zach Hyman for being the Leafs’ best forward option on the man advantage.
For the Leafs to try a five-forward power play, they will need to ensure they get a good puck mover who can act as the quarterback while also being able to jump into the play if needed. Marner seems like the obvious choice here since he is the team’s best passers, has a high hockey IQ, and his experience on the PK gives him the edge over the other members of the Leafs’ core group. It also helps that Marner’s shot has also improved dramatically and he has the highest shooting percentage in his career to date.
Advertisement
Ad
Advertisement
Ad
A top unit with five forwards may look something like this:
Nylander
Matthews-Tavares-Galchenyuk
Marner
You may think the idea of the Leafs trying this out seems outlandish at first. The reality is that they have experimented with similar ideas in the past and other NHL teams seem more willing to try it. Keefe has shown his willingness to attempt it during his days coaching the Marlies and it has carried over to this season. Not only have the Leafs gone with all forwards during power plays in overtime, but there were also moments both last season and this year where Toronto gave it a try in regulation. Regardless of the game scenarios for when these aforementioned power plays occurred, the fact remains that Keefe was open to using only forwards so it would not seem too crazy for him to experiment with a top unit that has no defenceman.
Advertisement
Ad
Advertisement
Ad
The Leafs should not be limited to only using defenders on the power play simply because that is how NHL teams have done it since the inception of the sport. They are blessed with an incredible depth of talented forwards who are capable of lighting the lamp multiple times a night, so perhaps it is time Toronto propels a new direction for the sport by going all-in on a top unit with just forwards.
All stats unless otherwise noted are from Hockey-Reference.com and Natural Stat Trick.