Advertisement
Ad
Some Thoughts On The Leafs Rookie Tournament Roster 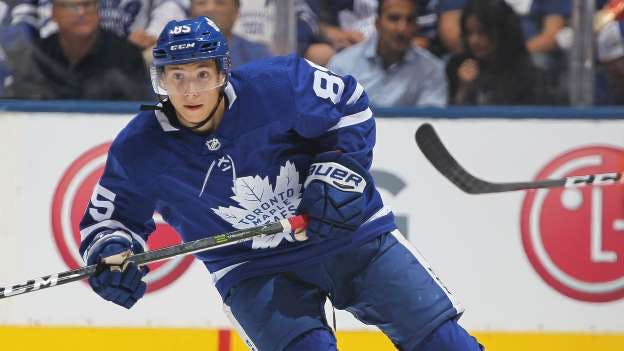 Photo credit: © Photo by Claus Andersen/Getty Images
By 51Leafs
3 years ago
Comments
It’s almost September, which means we’ve nearly reached Rookie Tournament Season! The Leafs just announced their roster for the upcoming Traverse City Prospects Tournament, which you can find here.
So, what exactly have the Leafs brought to the tournament here? Let’s break it down.

The Leafs are bringing a total of ten draft picks to the tournament. Two of them were recently drafted in the 2019 NHL Draft: Nicholas Roberston, their second-rounder, and Mikhail Abramov, the first of their two fourth rounders. Mikko Kokkonen, Mike Koster, Kalle Loponen, and Nick Abruzzese, who were also drafted in 2019, will not be going to the event.
It’s usual for European-based players, USHL players and NCAA players to miss the event, which would explain their absences.
Four draft picks from the 2018 NHL Draft (Semyon Der-Arguchintsev, Mac Hollowell, Filip Kral and Riley Stotts), one draft pick from the 2017 NHL Draft (Ian Scott), two draft picks from the 2016 NHL Draft (Egor Korshkov and Joseph Woll and one draft pick from the 2015 NHL Draft (Jesper Lindgren) will also be attending. Der-Arguchintsev, Kral, and Stotts are expected to return to the CHL for next season, while the other players mentioned will play their first North American professional seasons in 2019/20.
Advertisement
Ad
Advertisement
Ad
What the Leafs have in this group is a pretty skilled, smart group, although it is one that lacks top-end talent. There are no first-round picks on this roster and two second-round picks (Korshkov and Robertson). Their goaltending should be among the best in the tournament though, as the tandem of Woll and Scott is no joke.

The Undrafted, But Signed

The Leafs’ roster will also include 13 players who they have signed in Free Agency.
Teemu Kivihalme will be in attendance, a 23-year old Finnish defenceman who the team recently signed to a one-year entry-level contract. Joseph Duszak, a recent free-agent signing out of Mercyhurst in the NCAA, will also be in attendance. He got into a couple of playoff games with the Marlies last season and will be turning pro full-time next season.
Advertisement
Ad
Advertisement
Ad
11 players who are signed to AHL contracts (Matt Bradley, Trey Bradley, Justin Brazeau, Colt Conrad, Hudson Elynuik, Giorgio Estephan, Ryan Moore, Kristians Rubins, Sergei Sapego, Riley Woods and Maksim Zhukov) will also suit up.
Ryan Moore, Kristian Rubins, Hudson Elynuik, Giorgio Estephan, and Matt Bradley were all at the event last year with the Leafs and were all regulars on the Kelly Cup Champion Newfoundland Growlers last season. Conrad was signed out of the NCAA to an AHL deal late last season, suiting up in 7 AHL games with the Marlies. Brazeau was signed to an AHL deal a little later, once he had put up 61 goals in 68 games for the OHL North Bay Battalion.
Woods, Sapego, Trey Bradley, and Zkukov are other recent additions to the organization, also on AHL contracts. I’d expect them all to be regulars in Newfoundland next season.
Advertisement
Ad
Advertisement
Ad

The Leafs have also invited nine undrafted free agents (Vladimir Alistrov, Joe Carroll, James Hamblin, Sean Larochelle, Josh Nelson, Marc-Antoine Pepin, Carter Robertson, Xavier Simoneau and Nathan Staios). Alistrov, Carroll, Staois, and Simoneau are all noteworthy. They were all players that I had expected to get drafted in 2019.
My viewings of them are pretty limited, but here’s what I’ve got:

Check out THIS backhand cheddar by JOE CARROLL! pic.twitter.com/WWc5BChvCg

It’s a pretty solid group of invitees overall. The Leafs could theoretically sign one to an Entry-Level Contract as Trevor Moore did a few years ago, though it’s more likely that they’re just potential draft options for 2020 as overagers.
Mac Hollowell and Sean Durzi are past examples of that.

So, How Good Is This Roster?

Overall, the Leafs are bringing a decent roster to this year’s tournament. They lack big-name prospects, but they do have some older players with solid experience playing in top-tier professional hockey leagues (Korshkov, Kivihalme, and Lindgren), two very solid goaltenders (Scott, Woll), a few players that showed that they were way too good for junior hockey last season (Brazeau and Hollowell), and one that showed that he was too good for the NCAA (Duszak). They also have Nick Robertson, who is a player who I would’ve used a late first-round pick on in 2019.
Advertisement
Ad
Advertisement
Ad
The Leafs will likely get crushed by a team like the Rangers, who are bringing Kaapo Kakko, Adam Fox, and Vitali Kravtsov, but the team is still bringing a good amount of drafted prospects that fans will be interested in watching, and some older guys that will help them compete.
As a prospect nerd, I’ll be keeping an eye on this team when the puck drops to start the tournament, and I think that you probably should too if you have interest in Leafs prospects, or just really miss hockey.