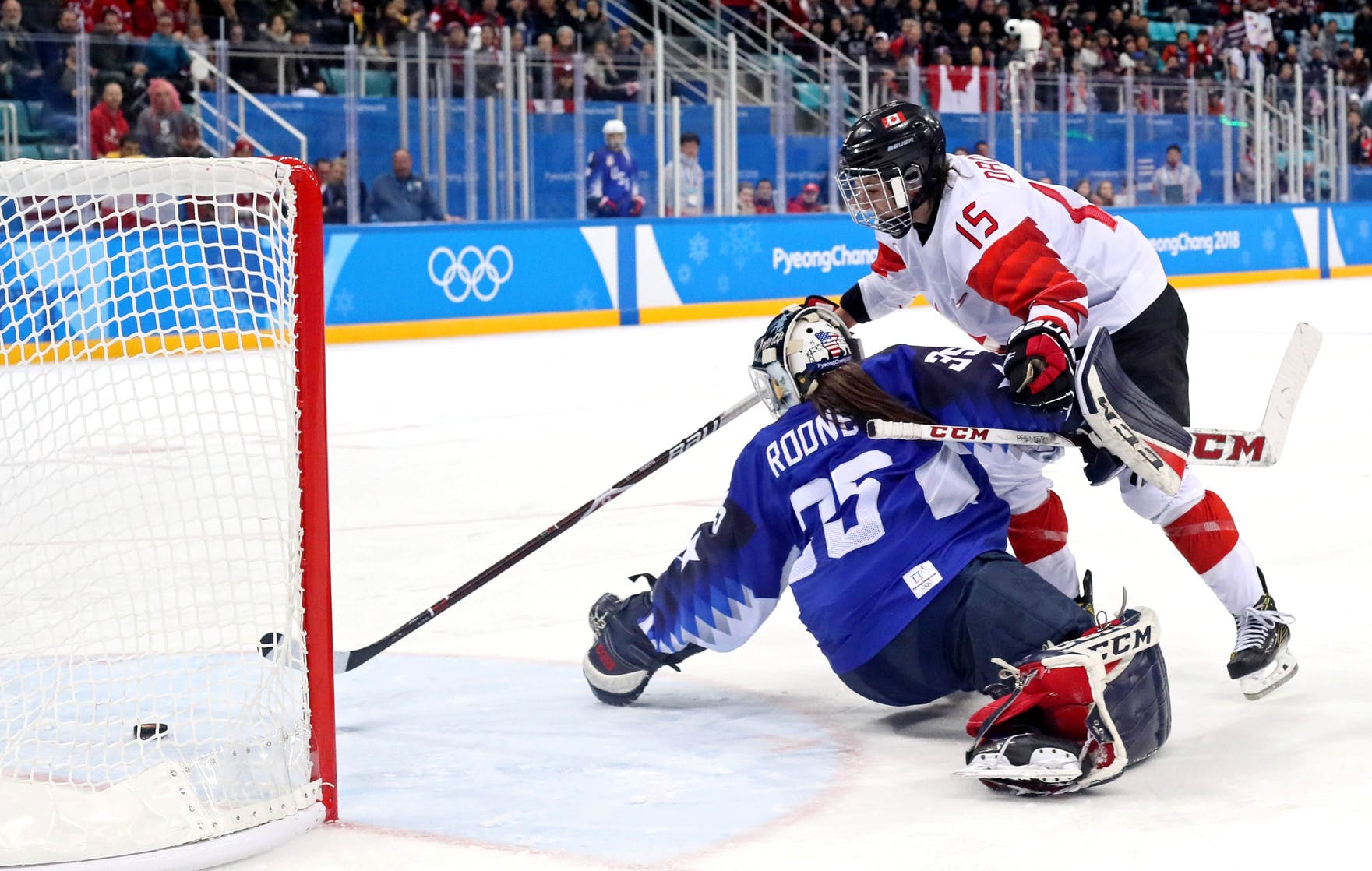 Photo credit: David E. Klutho-USA TODAY Sports
By Ryan Hobart
10 months ago
Comments
Yesterday, the “Team Canada” Olympics Twitter page announced the 23 women who will represent the nation in Beijing.
The women get ready to avenge their loss to the rival Americans, who they lost 3-2 against in the Gold medal game in the 2018 Winter Olympics, winning the Silver. The Canadians had been on a Gold-winning streak since 2002, four years of Gold in a row, until the Americans broke that combo.
Team Canada will bring 13 returning players this year, with 10 fresh faces to round out the team. Principal returnees are forwards Marie-Philippe Poulin and Rebecca Johnston, who are both returning for their fourth Olympics and seeking their third Gold medals.
Here is the full team for this quadrennial competition:
Goaltenders
Kristen Campbell (Brandon, MB)
Ann-Renée Desbiens (La Malbaie, QC)
Emerance Maschmeyer (Bruderheim, AB)
Advertisement
Ad
Advertisement
Ad
Defence
Erin Ambrose (Keswick, ON)
Ashton Bell (Deloraine, MB)
Renata Fast (Burlington, ON)
Jocelyne Larocque (Ste. Anne, MB)
Ella Shelton (Ingersoll, ON)
Claire Thompson (Toronto, ON)
Micah Zandee-Hart (Saanichton, BC)
Forwards
Emily Clark (Saskatoon, SK)
Mélodie Daoust (Valleyfield, QC)
Sarah Fillier (Georgetown, ON)
Brianne Jenner (Oakville, ON)
Rebecca Johnston (Sudbury, ON)
Emma Maltais (Burlington, ON)
Sarah Nurse (Hamilton, ON)
Marie-Philip Poulin (Beauceville, QC)
Jamie Lee Rattray (Kanata, ON)
Jillian Saulnier (Halifax, NS)
Natalie Spooner (Scarborough, ON)
Laura Stacey (Kleinburg, ON)
Blayre Turnbull (Stellarton, NS)
(Thanks to eliteprospects.com for all of the player profiles, and to olympic.ca for the player list)
With only 6 players from the GTA, the Olympic team certainly isn’t taking cues from the Maple Leafs on how to build a hockey team. Perhaps that’s for the best, as much as we love the players that have come home in Toronto…
After leading Canada in scoring in the previous Olympics, Melodie Daoust is back on the team again, and will certainly play an important role, and being the MVP in the 2021 World Championships.
Advertisement
Ad
Advertisement
Ad
In between Daoust topping Canada’s scoring charts, it was Natalie Spooner who led the team in the 2019 World Championships, where Canada failed to make the final round and only secured Bronze, with Finland losing to USA in the final.
But as you saw, Canada won the tournament last year, so they’re in a good position to win again in the Olympics.
On the back end, one of the major returnees is veteran Jocelyn Larocque, who has been the focal point of Canada’s defense post-Vancouver in 2010.
Gearing up for the Olympics, Larocque was asked about her sense of the team heading into 2022:

“So much of a successful part of our journey this year is that true belief, regardless of the score… it’s that genuine belief that we can win or just play really good hockey. We’ve really focused on the process and the things we need to do in order to be successful.”
Larocque added: “This is the best team that I’ve ever been a part of.”

For the newcomers, one of the biggest names is Erin Ambrose, who just missed the cut for the 2018 team and will certainly be eager to make the most of her first Olympic appearance. She was dominant and a huge part of Canada’s win at the 2021 Worlds with 5 points from the blue line.
Advertisement
Ad
Advertisement
Ad
22 of the 23 players that Canada is bringing to Beijing were on that 2021 Worlds roster in Calgary. Only Micah Zandee-Hart was left out of that team but made this 2022 team, which is quite a feat given how dominant Canada was in that tournament, and that she beat out GTA-born Jaime Bourbonnais, who looked like a solid up-and-coming defender for Canada at that tournament.
Others who didn’t make the team from that World Championship squad are forwards Kristin O’Neill and Victoria Bach. The latter, Bach, is a bit of a surprise, having tallied 2 assists in that tournament.
Obviously, Canada has its sights set on Gold, and the Americans will be their top competition again. But Finland has been strong lately, as has Switzerland and Sweden, so nothing in this Olympics will come easy. We will have to wait and see if this group can bring Canada back to the top of the Olympic podium in hockey.
Advertisement
Ad
Advertisement
Ad
For the schedule, the below is copied from Team Canada’s announcement, but you can find the full schedule here:

Hopefully you’re able to stay up late or get up early enough to watch this exciting team fight for Gold!