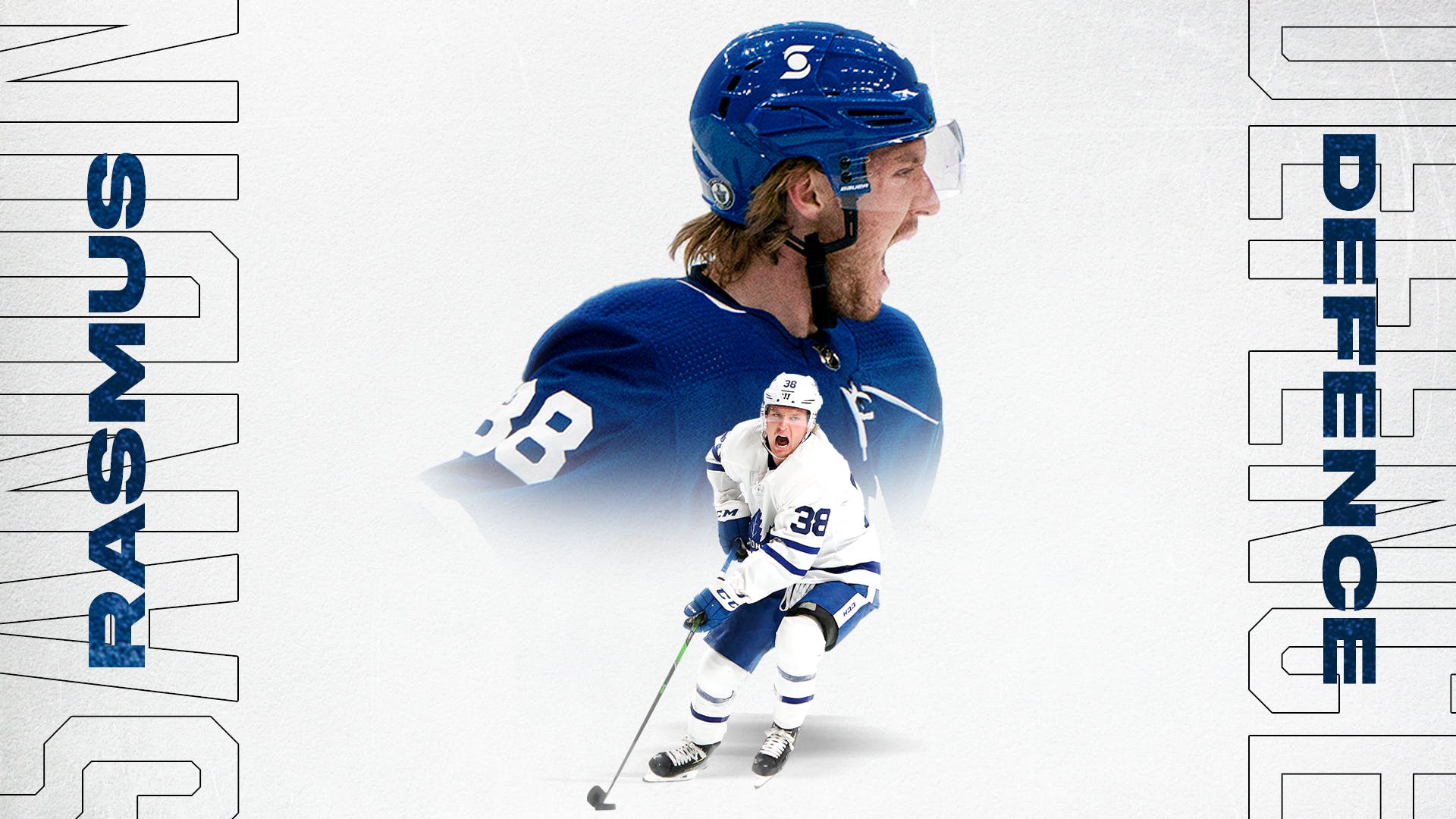 @Rasmus Sandin burst onto the scene after being drafted late in the first round of the 2018 NHL Draft, nearly making the Leafs’ roster on the back of an impressive training camp and preseason. He didn’t end up making the cut in that first year but the way he handled the transition to a professional setting as an 18-year-old defenseman made it clear very early on that Kyle Dubas and the Leafs’ scouting staff had unearthed a high-end prospect – even after trading down from 25th to 29th.
Kyle Dubas’ connection to the Soo Greyhounds – which is where Sandin played in his draft year – has been well documented and he saw value in the player that other NHL teams may have missed. Sandin has already played more NHL games than 15 of the players drafted ahead of him, trailing only @Quinn Hughes, @Rasmus Dahlin, @Ty Smith, and @Adam Boqvist in points per game among defensemen from the 2018 draft class. Now 21 years of age, he appears to be a lock to make the Leafs’ roster out of camp as a third pairing, powerplay quarterback.
Position: D
Age: 21
Height: 5’11”
Weight: 187 lbs
Drafted: 2018, First round, 29th overall
2020-21 Team: Toronto Maple Leafs, NHL/Toronto Marlies, AHL
2020 Prospect Ranking: 2
Sandin had a disjointed, abbreviated season in 2020-21 but his performance was still enough to propel him past @Nicholas Robertson and claim the #1 spot on this year’s ranking after being our #2 ranked prospect a year ago. He began the season on the Leafs’ taxi squad and didn’t suit up until their 13th game of the season, marking nearly a calendar year between games for the young Swede. He played sparingly and was subsequently sent down to the Marlies after just one game to get some ice time in a more prominent role.
Advertisement
Ad
Advertisement
Ad
In a cruel twist of fate, Sandin broke his foot blocking a shot in his first AHL game of the season and the injury would keep him on the shelf for two months. Upon his recovery, he rejoined the Leafs and got into eight more games down the stretch, finishing the regular season with four assists in nine games. Though it was a limited sample size, that offensive production and the intelligence in his game were enough to not only secure a spot in the lineup but usurp @Morgan Rielly as the primary powerplay quarterback to begin the playoffs. He struggled at times to adjust to the pace of postseason action but his value as an offensive driver from the back end was apparent.
Sandin has produced offense from the blue line for his entire career. He racked up 45 points in 51 games for the Greyhounds in his draft year, had 28 points in 44 regular season games and 10 more in 13 playoff games as a rookie with the Marlies, and piled up 15 points in 21 AHL games in 2019-20 when he split time between the Marlies and the Leafs.
Advertisement
Ad
Advertisement
Ad
With @Travis Dermott still recovering from offseason shoulder surgery, Sandin made the Leafs’ roster to begin the 2019-20 season but was sent back down to the Marlies after six games. Following a stellar performance at the World Juniors with Sweden that saw him earn ‘Best Defenseman’ honors for the tournament, he made his way back to the Leafs’ roster in the second half of the season with the team battling injuries on the blue line. For the season, he got into 28 games with the Leafs and finished with eight points – including his first NHL goal:

Sandin’s value, however, is not limited to his offensive production – not by a long shot. His game is built around his exceptional on-ice vision and intelligence, allowing him to impact the game with and without the puck on his stick. He drives play forward from the back end by leading clean breakouts with his elusiveness and passing ability. Sandin has good puck skills and the ability to maintain control under pressure while evading oncoming forecheckers to find passing lanes or space to skate the puck out himself. He is composed with the puck but moves it quickly when he identifies a passing option.
Advertisement
Ad
Advertisement
Ad
Watch how he employs shoulder checks to scan the ice before he even retrieves the puck, identifying the oncoming threat as well as his options once he gets to it. He has a plan before the puck is on his stick, confidently spinning off his check and dishing a slick backhand feed to @Jason Spezza alone in middle ice. This is a confident, highly skilled play for a young defenseman to make at the NHL level:

Sandin with a spin move to get around his man and help start the breakout. #LeafsForever pic.twitter.com/IVT5Wt0hXh

He understands what the opposition is trying to do on breakouts and in transition as well, maintaining tight gaps off the rush and eliminating passing lanes proactively. Reading the opposing breakout, he has great timing to smother passing options in the neutral zone and force errant feeds. Sandin’s ability to negate opposing rushes and quickly turn play in the right direction for his team is a highly valued commodity in today’s NHL.
Advertisement
Ad
Advertisement
Ad

– Steps up in the neutral zone and breaks up the outlet pass with a nifty stick-lift.
– Shows off some patience during the breakout
– Gets open then makes a beautiful saucer pass to Gauthier pic.twitter.com/vxOClW72Pp

In the offensive zone, Sandin is a dual-threat from the point. He has good mobility to evade defenders inside the blue line as well as great vision, routinely completing difficult passes through layers of coverage. His off-puck movement and quick hands manipulate coverages to help create lanes in the offensive zone. Sandin also has a great shot and he gets it on net with good frequency, taking advantage of shooting lanes when presented with the opportunity. His one-timer is a legitimate weapon that he releases with power and accuracy, providing the Leafs’ powerplay unit with something that it has been missing for a long time.

Rasmus Sandin got ALL of that one. 🚀 #ItsOn pic.twitter.com/UEXzwgIR4W

Sandin isn’t the biggest defenseman and unlike most undersized players, his top-end speed might be his greatest weakness. He is agile and elusive, allowing him to slip around checks and maneuver through traffic, but he can sometimes struggle when opposing puck carriers attack with speed. On the rare occasions that he gets caught up ice, the chances of him winning a foot race back to his own zone aren’t great.
Advertisement
Ad
Advertisement
Ad
Perhaps even more unusual for a defenseman of his stature is just how physical he is. The way he is able to read the play allows him to line up checks in open ice and he is more than willing to throw his weight around.

And we all remember this one:

Sandin plays an incredibly well-rounded game and despite a few rough moments in the playoffs, appears poised to take on more at the NHL level this coming season. He has the offensive skill, defensive awareness, and physicality to succeed at the NHL level, and if he can add a bit of explosiveness to his stride while continuing to adjust to the NHL pace, the sky is the limit for the burgeoning blue liner.

“I just think that with Rasmus, the payoff can be really big for us in terms of his skill set and what he can bring…”
– Sheldon Keefe, via The Athletic

Barring any surprise additions for the Leafs ahead of training camp, Sandin is penciled in to begin the year on the left side of Toronto’s third pairing alongside Travis Dermott. He could also have the inside track on the role of powerplay quarterback on the Leafs’ first unit after seeing time there in the playoffs and, at worst, will man the point on the second unit to start the season. With fellow prospect @Timothy Liljegren also pushing for NHL minutes, the Leafs will have the option to manage Sandin’s workload in what should be his first full NHL season.
Advertisement
Ad
Advertisement
Ad
Sandin has starred for the Marlies and impressed in limited action with the Leafs since being drafted in 2018. With a full training camp ahead of him and a tumultuous 2020-21 campaign in the rearview mirror, the Maple Leafs’ top prospect is ready to graduate to the next level and make his mark in the NHL.
(Statistics from EliteProspects.com)