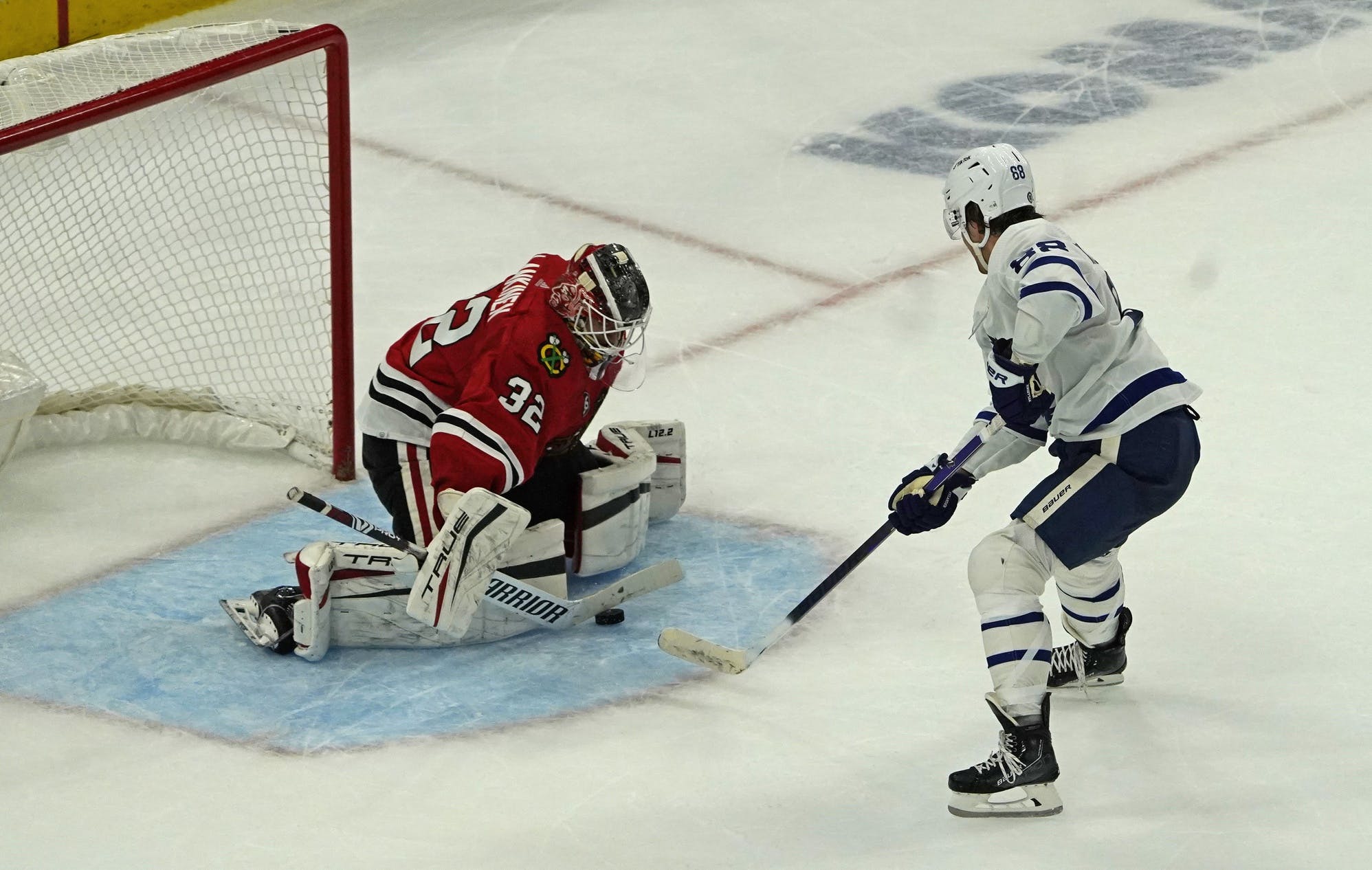 Photo credit: David Banks
By Scott Maxwell
1 year ago
Comments
Well that was a rollercoaster.
After a couple straight beatings at the hands of the Pittsburgh Penguins and the Carolina Hurricanes, the Leafs came out of the gate with another flat effort against Chicago, allowing two goals in the first, only to make a nice comeback thanks to backhanders from John Tavares and David Kampf, and a nice breakaway goal from William Nylander to win the game in overtime. It was far from perfect, and it’s still pretty sad that they barely beat a team without a win, but they managed to come out without being their first win, so that’s a plus.
Here’s to hope.

Even when the team was dead, you could still see William flying out there, even getting a little bit physical when it seemed like the team didn’t have a spark. It wasn’t his best night analytically, with only 50.68% of the expected goals at even strength, but he seemed like one of the few Leafs with life, and it paid off with the OT winner.
Advertisement
Ad
Advertisement
Ad

IT FEELS SO NICE TO SEE LEAFS SCORE AGAINST THEIR FORMER TEAMS! Kampf was a bit of an unknown going into the season for Leafs fans, but he’s been a nice surprise early on, and this game was no different. He had 63.64% of the shot attempt share and 69.76% of the expected goals at even strength, and got his first goal as a Leaf against his old team.

Campbell was left hung out to dry early on, but he shut the door once the Leafs were down 2-0, and it was probably the biggest reason the Leafs won. He kept them in the game, and it’s not like they were easy stops, he made some amazing saves. I hope the boys take him out to Red Lobster after this one.
Advertisement
Ad
Advertisement
Ad

I know it’s early, but this is becoming too many games in a row where this pairing looks awful. I’m not surprised by Holl because I think everyone knew he wasn’t driving the bus there, but if this is the new Muzzin, the Leafs are very, very screwed.

Thank you, Kyle Beach. No one should have to experience that, let alone the response from those in positions of power. Gut wrenching to watch.

There are no words for #Blackhawks allowing Brad Aldrich’s life to be like it was the day before, like nothing happened (via @rwesthead) pic.twitter.com/vsAPHfHmNr

While some progress was made today, the NHL and hockey culture has miles to go before it makes up for all the mistakes of it’s past. The fact that it took this long is incredibly disappointing, but hopefully things improve from here. Kyle Beach, you are incredibly brave for not only speaking out, but also revealing your identity, and you have the support of all of the hockey world (or at least the good ones).

Hopefully the lesson the Leafs learned from this game is that they can slack off against bad teams, because Detroit has been surprising teams so far this season. They’ll be short their leading goal scorer because despite being a team first guy, he’s decided that his anti-vax beliefs are more important than the team, but who am I to judge? The Wings and Leafs will faceoff on Saturday, October 30 at 7 p.m. on CBC. Hopefully the Leafs don’t pay tribute to Halloween with another terrifying performance.
Advertisement
Ad
Advertisement
Ad