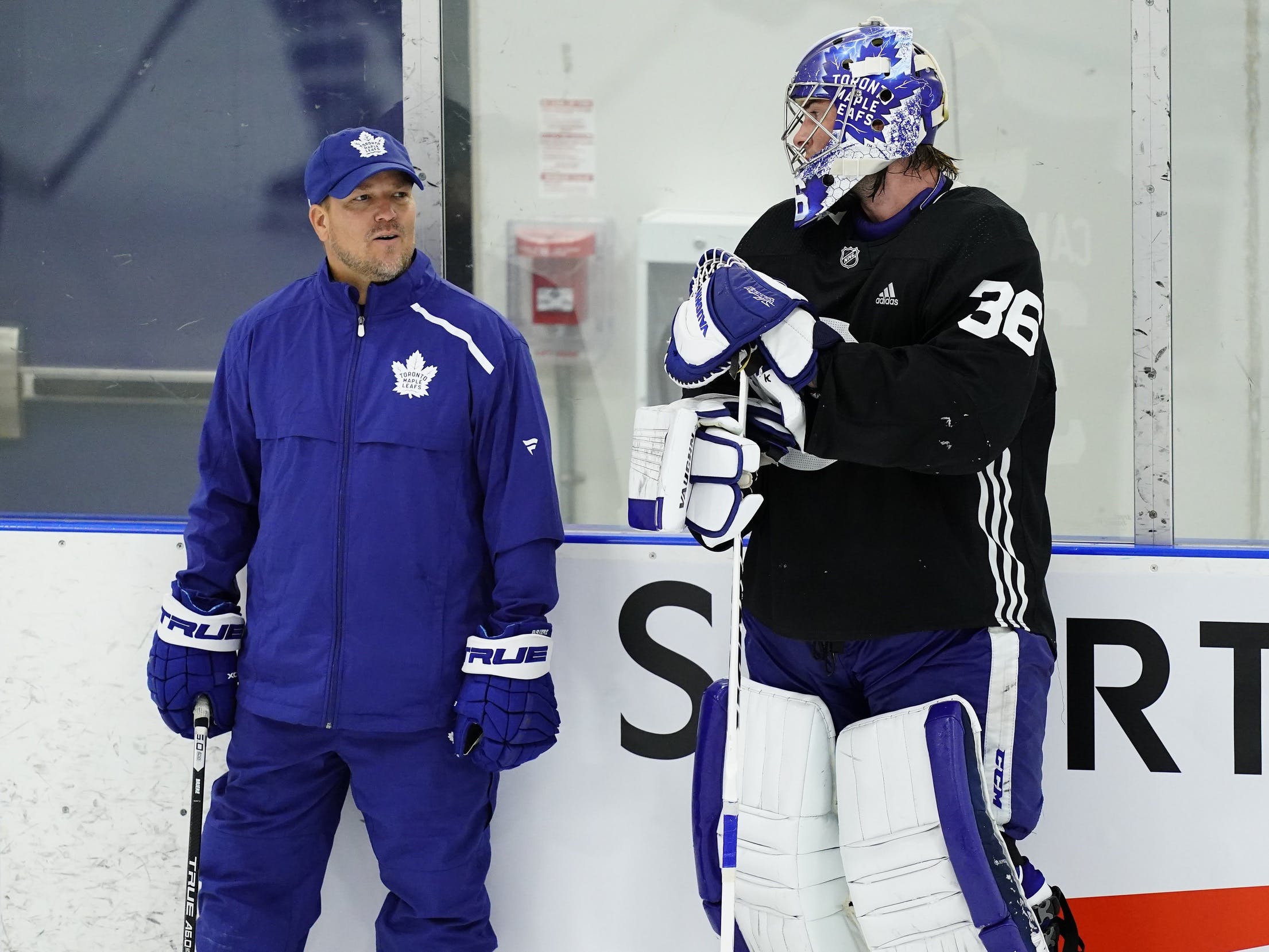 Photo credit:© John E. Sokolowski-USA TODAY Sports
7 months ago
The Toronto Maple Leafs have made some sharp moves over the past few years to help build out a competitive team. Whether it’s to sign low-cost free agents that can fill demanding positions like forward Michael Bunting, or fixing mistakes like trading forward Nick Ritchie to the Arizona Coyotes for useful defenceman Ilya Lyubushkin, Kyle Dubas has seemed to find a way.
But where the Leafs GM has missed hard, as of late, is in the goaltending position. And it appears as though he’s ready to find a solution for it.
As first reported by NorthStar Bets’ Chris Johnston, the Leafs will not renew the contract of goaltending coach Steve Briere when it expires at the end of the month. And while it’s hard to blame the team’s goalie coach for much of the team’s inability to develop netminders, the dismissal of Briere has less to do with the job he has done and more about the future of the position.
In the time Dubas has been GM of the Maple Leafs, he brought in Jack Campbell in a trade with the Los Angeles Kings in 2020. It was a shrewd move that saw the Leafs upgrade their depth in goal behind Frederik Andersen. One season later, Campbell overtook Andersen in the starter’s role.
Moving on from Andersen, the Leafs signed Petr Mrazek to a three-year, $11.4 million contract on July 28, 2021. Already up against a tight cap, Mrazek’s salary and term defied logic in many ways. If Campbell continued to perform at his current pace of success, the club would be stuck with an expensive backup goaltender. There was also what actually happened; Mrazek was limited to 20 appearances due to injury, a theme throughout the 30-year-old’s entire NHL career.
The only way for the Leafs to have come out ahead was for Mrazek to overtake Campbell as the undisputed No. 1 starter, at which case a $3.8 million cap for the next two seasons for a starter would look like a bargain.
The very moment Mrazek’s contract was signed, it was riddled with issues. But months after an embarrassing first-round exit against the Montreal Canadiens, you couldn’t really blame the Leafs for not looking past the 2021-22 season.
The team was and still is, in win-now mode. A more embarrassing first-round loss than the one actually suffered against the two-time defending Stanley Cup champion Tampa Bay Lightning in May and the Leafs are probably faced with more pressing issues than just goaltending.
But here we are.
The questions are not just who is going to start in goal for the Maple Leafs next season, but who will shepherd the position?
Campbell can easily command $5 million on the open market. Do the Leafs want him at that level after an up-and-down season in which he was named an NHL All-Star, yet finished with an .897 save percentage.
The Leafs could simply just figure out their starter for next season and hire a new goaltending coach afterwards, but they need to go deeper than that.
What they need to do is bring in someone at the front-office level to deal with goaltending.
There are several teams that have added a ‘Director of Goaltending’ to their front office while having someone else handle the actual goaltending coaching duties. The position needs to be represented in the same way the other elements of the game are, from player development, scouting, etc…
Perhaps if an assistant manager/director of goaltending was in the office at the time Dubas entered negotiations with Mrazek, he could have been warned about the red flags that have come with giving the goaltending the money and term he received. But a Director of Goaltending goes beyond the short term. That person can help develop their goalies. That person can help develop a future goaltender from within that hasn’t been seen since James Reimer or Felix Potvin before him.
With a clear focus on the future, the Leafs could do something transformative with their goaltending. A proper department that can focus on a key part of the game. They don’t necessarily have to go with the goaltending excellence department that the Florida Panthers have opted to do, led by Roberto Luongo, but a Director of Goaltending with an influence akin to that of an assistant general manager is an excellent place for the Leafs to start.
More from TheLeafsNation.com