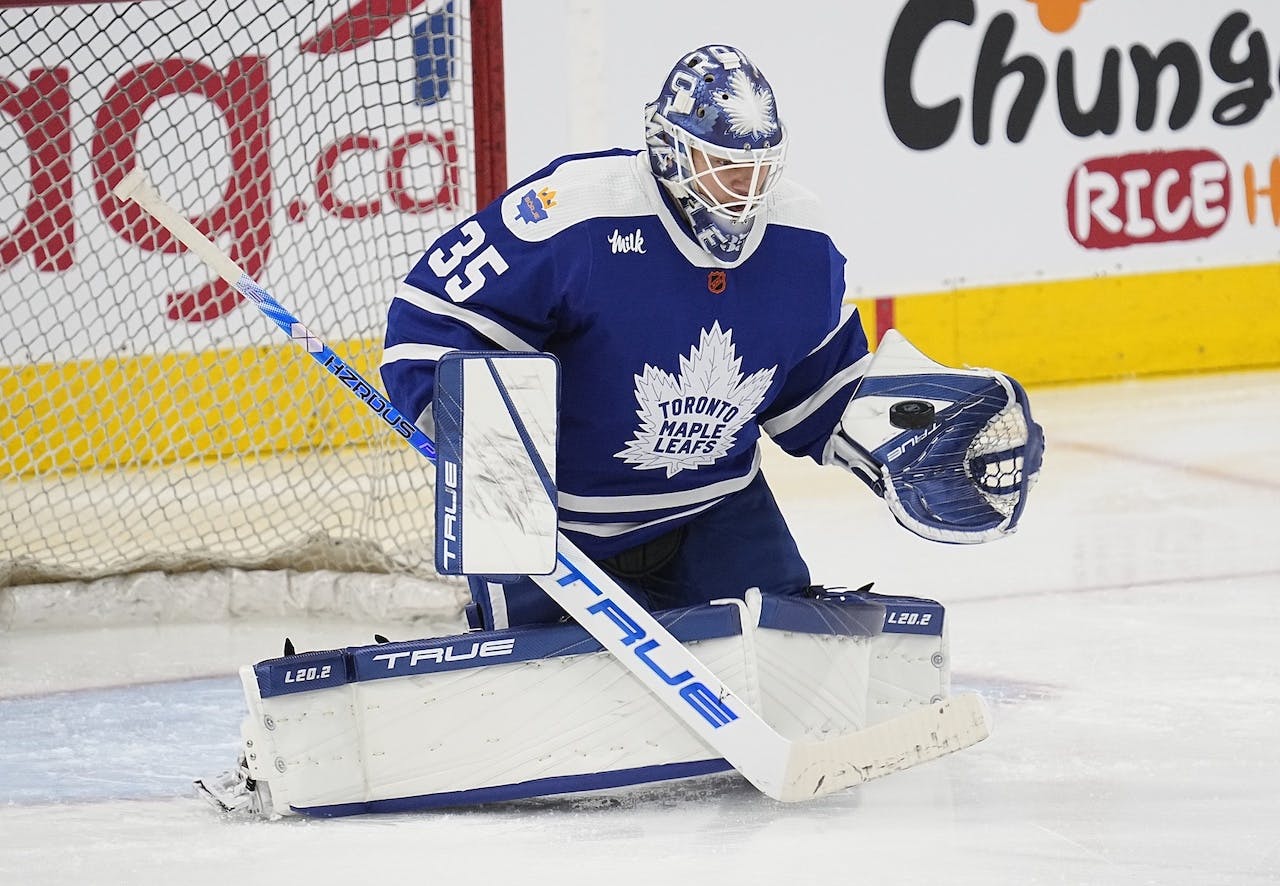 By Nick Alberga
1 month ago
If Ilya Samsonov gets his way tonight, Alex Ovechkin won’t be tying Gordie Howe for second all-time in NHL goal scoring.
That said, he needs just one goal and the game’s on HNIC, so we probably all know where that’s headed.
At any rate, the 25-year-old Russian netminder, who spent the first three seasons of his NHL career with the Capitals, will get the call in his return to Capital One Arena.
Back on October 13th in Toronto, Samsonov made 24 stops as the Leafs upended the Capitals 3-2.
Toronto is coming off its first regulation loss since November 11th, 3-1, to the New York Rangers on Thursday night. Michael Bunting scored the lone goal. He’s now recorded at least a point in 10 straight outings.
Meantime, just like the Leafs, Washington has been streaking. They’ve won 9 of 11. Unsurprisingly, Alex Ovechkin has been a big reason why. The 37-year-old, who has seven goals in his past five outings, became the third player in NHL history earlier this week to hit the 800-goal plateau.
Time: 7 PM ET (CBC, Sportsnet)
Starting Goalies:
TOR Ilya Samsonov – CONFIRMED (9-2-0, 1.70, 0.939)
@
WSH Charlie Lindgren – CONFIRMED (7-4-2, 2.76, 0.910)
Projected Lineups:

Three Storylines:
SAMMY’S RETURN
Plain and simple, every player wants to beat their former team, especially on the road. Well, Samsonov will get his chance tonight as he returns to Washington for the first time since the organization elected to move on from him last summer. In retrospect, that decision doesn’t seem like a good one, does it? Coming into this one, Samsonov, who’s posted back-to-back shutouts, boasts the NHL’s best goals-against average (1.70) and save percentage (0.939). He’s been tremendous. Can’t wait to see what unfolds.
OVECHKIN’S PURSUIT OF HOWE
Indisputably, Samsonov’s return will be overshadowed by Alex Ovechkin’s pursuit of history. As mentioned, the 37-year-old potted No. 800 a few days ago and is now just one goal behind Gordie Howe for second all-time in NHL history. Suddenly, 894 is becoming very real and seems inevitable at this point. The dude’s an absolute machine. By the way, if you’re looking to play a shot prop tonight, I would definitely Ovechkin’s way. Rest assured, he will be hungry and motivated.
SCORE FIRST
In the past 16 games, Toronto has scored the first goal 12 times. Furthermore, on Thursday night, they surrendered the first goal. You see where I’m going with this. Like most teams, when the Leafs get the lead, they’re a much different team to play again. And that’s why I think tonight’s start will be crucial, especially after a tough loss where nothing seemed to go their way. I know it’s cliche (because who doesn’t want to score first), but scoring first has been a monumental ingredient to success lately for the Maple Leafs. This is a confident bunch and I have minimal doubts they’ll be able to bounce back with a better overall game.
BETTING:
Courtesy our friends at PointsBet Canada, here’s tonight’s lines & odds:
(As of Noon EDT)
Prop Play:
Alex Ovechkin Over 3.5 SOG (-160)
Editorials
News
Recent articles from Nick Alberga