Scoreboard Watching: Tonight presents an opportunity for the Leafs to clinch 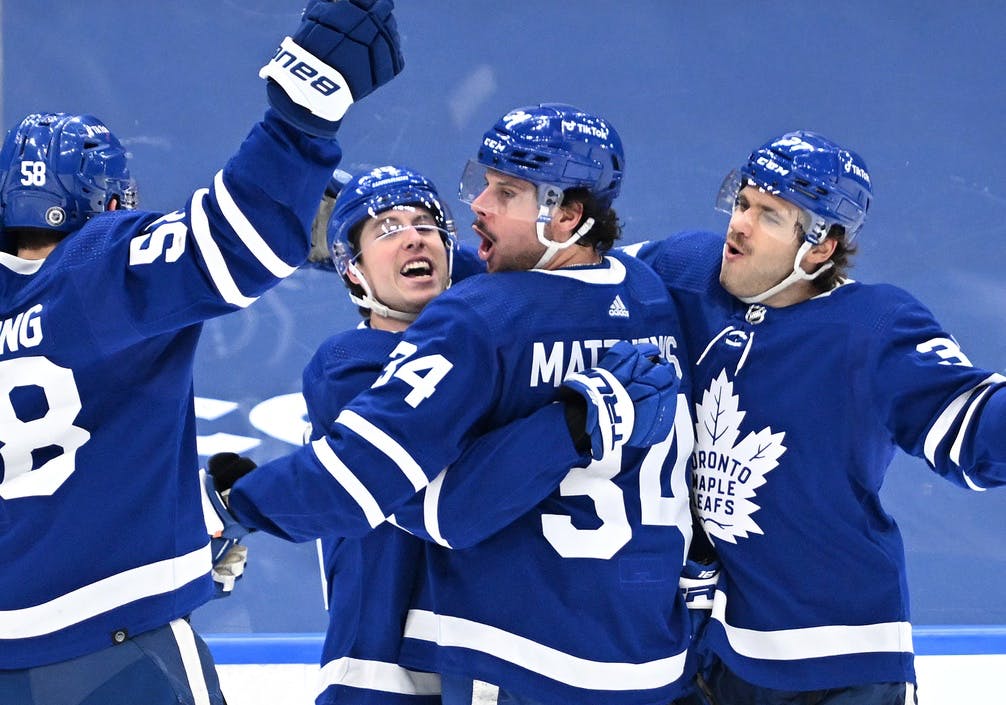 By Jon Steitzer
9 months ago
I don’t have fond memories of the Leafs fate being in the hands of Lou Lamoriello, but at least for tonight, we’re back to old times. Well, not really, but the Leafs are in a situation where they can clinch a playoff spot if the Islanders lose tonight. And the Islanders have been pretty good at losing. Playing the Hurricanes will also likely help that along to some extent, even if the Hurricanes can certainly take their foot off the gas for the rest of the month as well.

If the Islanders lose in regulation against the Canes, the best they can do on the season is reach 97 points. If they lose in overtime or in a shootout, the Islanders cannot match the Maple Leafs on wins in regulation and overtime, and Toronto would be in. So considering the Islanders tend to lose more than they win, tonight could be a very nice night for the Leafs, even if we could pretty much punch that ticket to the playoffs anyway.
Perhaps even more important for the Leafs is the fact that they’ve built a comfortable five point buffer over the Bruins and Lightning, even if both of those teams have a game at hand on the Leafs. And while the Bruins and Lightning playing each other means that one team has closed that gap to three points, that also means the other is even further in the hole with being 4, or 5 points back without the game at hand. Over an 11 game stretch, it isn’t exactly easy to pick up two more wins than your competitors. The wheels really need to come off for someone (cut to a montage of all the times the wheels came off for the Leafs.)
From a Leafs perspective, they are blessed with a schedule that helps them down the stretch. Of their 11 games remaining, seven games will be played at home, another will be in Ottawa which is essentially home as well. That remaining three game road trip against Tampa, Florida, and Washington is decidedly less fun, but perhaps a good final reality checks prior to the playoffs.
The Leafs also benefit from the six of their remaining games coming against non-playoff bound opponents, so as long as playing down to their opponents doesn’t become a factor, the Leafs should be able to use that to maintain their spot as second in the division.
It has been an interesting situation of late. For much of the season, it seemed that Toronto was locked into third in the division, and the second place spot belonged to the Lightning. Of late the playoffs have taken on a much more traditional look with the Bruins emerging as the potential opponent. Neither option seems ideal, but you know what felt ideal? Playing the Blue Jackets in a play-in or facing Montreal in a Canadian division that the Leafs dominated all season. It’s safe to say it will be tough regardless, but the Leafs winning both of their games against the Bruins so far this year, and taking two of three from the Lightning should remind us that the Leafs are a good team that is capable of being the favourite.
I’ll close with the Money Puck odds for the Leafs playoff success…

The Leafs are once again in the uncomfortable position of being considered one of the Stanley Cup favourites. It seems the biggest challenge will be getting out of the first round, and with an early clinch, the Leafs will have a lot of flexibility in how they prepare for their potential playoff run.
More from TheLeafsNation.com
POINTSBET IS LIVE IN ONTARIO