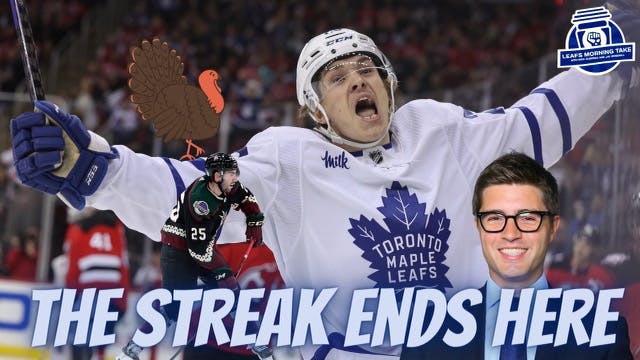 By Nick Alberga
2 months ago
Who saw that coming?
The depleted Leafs went into New Jersey last night and ended the Devils 13 game win streak.
What a gusty victory.
Of course, today’s edition of Leafs Morning Take was centered around that. Toronto’s point streak is now up to six games (4-0-2), they’re 7-1-3 in the month of November. In addition to getting the two points, there was no shortage of material to cover from the actual game. Pontus Holmberg potted his first NHL goal, Mitch Marner extended his career best point streak to 14 games, and oh yeah, the Devils had three goals called back. Furthermore, I thought it was embarrassing to see the fans pelt the ice with beer; it was like a mini tantrum. Um, your team’s won 13 straight games. Grow up.
After that, we broke down the Conor Timmins trade a bit. Another former Soo Greyhound, the 24-year-old adds some depth to a severely depleted back end. That said, he’s been injured a lot over the past few seasons, so hopefully he can stay healthy.
Lastly, with it being American Thanksgiving, we checked in on the NHL standings. All things considered, the Leafs should be feeling pretty good about themselves. Hell, they even gained ground on Boston last night!
Meantime, as a non-football watcher, I gave Rosie the keys to the car for the PointsBet Canada bet of the day. He likes the Minnesota Vikings point spread (-2.5) against New England.
I’ll be flying solo for the Friday edition (11 AM ET) ahead of Toronto’s matinee affair against Minnesota. That said, Rosie will check in with another instalment of 3 Hits With Rosie. Also, Dave Pagnotta of The Fourth Period will drop by to talk trades and what he could see the Leafs doing between now and the trade deadline.
Don’t forget to subscribe, like, and leave us a review wherever you’re checking us out!
Shows
Recent articles from Nick Alberga