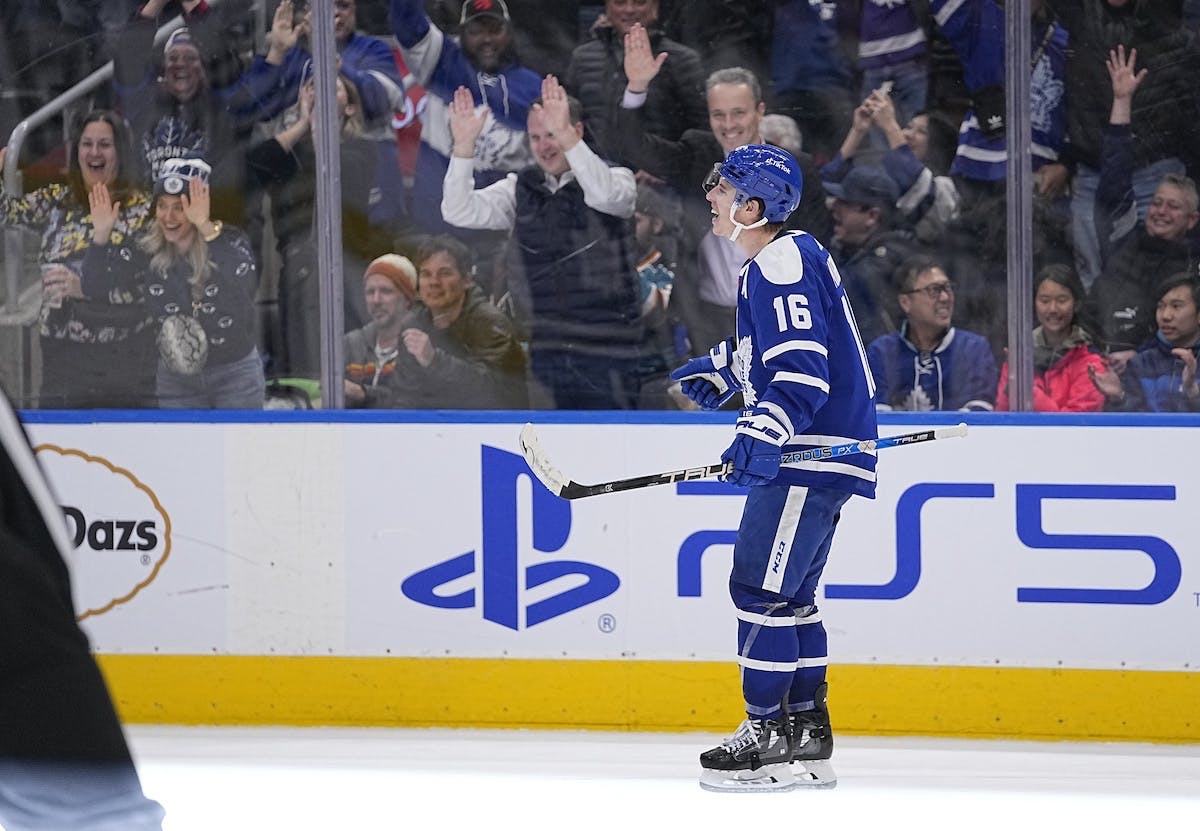 Photo credit: John E. Sokolowski-USA TODAY Sports
By Nick Alberga
2 months ago
Comments
Was it ever in doubt?
18 and counting.
With his empty netter, Mitch Marner tied Darryl Sittler and Eddie Olczyk for the longest point streak in franchise history.
Pierre Engvall’s tally with 2:27 remaining in regulation was the difference as the Leafs upended the Sharks 3-1 to improve to 15-5-5 on the season. In addition to winning their fifth consecutive game, the Leafs also extended their point streak to 10 games (8-0-2). In fact, they haven’t lost in regulation since November 11th.
And what a month it was for Toronto. After going 4-4-2 in October, they finished November with a ridiculous 11-1-3 record. What a turn of events.
Meantime, after missing 12 games with a knee injury, Ilya Samsonov made 23 stops for the victory in his return to Toronto’s crease. The 25-year-old is now 7-2-0 through nine appearances. Also, Calle Jarnkrok left the game in the second period with a groin injury and did not return.
Advertisement
Ad
Advertisement
Ad
Mercifully, that’s it for the season series with San Jose, Toronto went 1-0-1 against them.
Muzzy’s Muzings:
21 SECONDS OF SILENCE
In their first game back home since the passing of Borje Salming, the Leafs honoured the legend with a 21 second moment of silence. Additionally, his banner inside Scotiabank Arena flew at half-mast, and on top of that, all net proceeds on reverse retro jersey sales on the night went to ALS Action Canada. Personally, I thought it was a fantastic touch and a tremendous final farewell to an icon. May he rest in peace.

The @MapleLeafs held a beautiful tribute along with a 21-second moment of silence to honour and celebrate the life of Börje Salming. 💙

MARNER & LEAFS FIND A WAY
Advertisement
Ad
Advertisement
Ad
They’re not all going to be Picassos, and this one certainly wasn’t, but the Leafs and Marner both found a way. As expected, Toronto was victim of overpassing, which was understandable considering what was at stake. Additionally, there wasn’t much flow to the game, it was your classic letdown after coming home from a big-time road trip. That said, they found a way, that’s all that matters. As for Marner, he passed up several opportunities on the night, including a sure-fire empty netter just moments before he finally buried, but like his team, he persevered. And so, on Saturday night in Tampa, the 25-year-old will have a chance to own the longest point streak in franchise history. What a remarkable ride, he’s been incredible.
ANOTHER NOVEMBER TO REMEMBER
I love December but it’s going to stink to say goodbye to November. For the second straight season, the Leafs were an absolute wagon in month No. 2. They went 11-1-3 and have really found a groove again following an extremely ugly October. Again, there’s no doubt this entire ride is all about what this team does in the spring. Having said that, it’s important to enjoy the ride sometimes. I know I am.
Advertisement
Ad
Advertisement
Ad

So, that concludes November for the #LeafsForever.

Highlight of the Night:

18 STRAIGHT AND A PIECE OF LEAFS HISTORY! 🪄 pic.twitter.com/7VbkZkoEAR

WHAT’S NEXT?
The Leafs will kick off the month of December on Saturday night when they visit the Tampa Bay Lightning. This will be the first meeting between the two teams since last spring’s first round matchup in the Stanley Cup Playoffs. Furthermore, they split their four regular-season meetings in 2021-22.
PSA: Don’t forget to check out ‘Leafs Morning Take’ with yours truly, Nick Alberga, and Jay Rosehill every Monday to Friday morning LIVE at 11 a.m. ET on The Nation Network YouTube page.

Get a gift with purchase for adiClub members, when you spend $100 or more, and members were rewarded for their purchase with a limited-edition T-shirt, or a Tote bag designed by a local artist. All prizes were on a first come first serve basis, while supplies last. The Adidas store is located on the first level at the bottom of the escalators in the Cadillac Fairview Eaton Centre and has a variety of special offerings in-store – from live music to guest appearances – the halo store will reflect Toronto’s passion for community and diverse spirit and will continue to host pop-up events throughout.