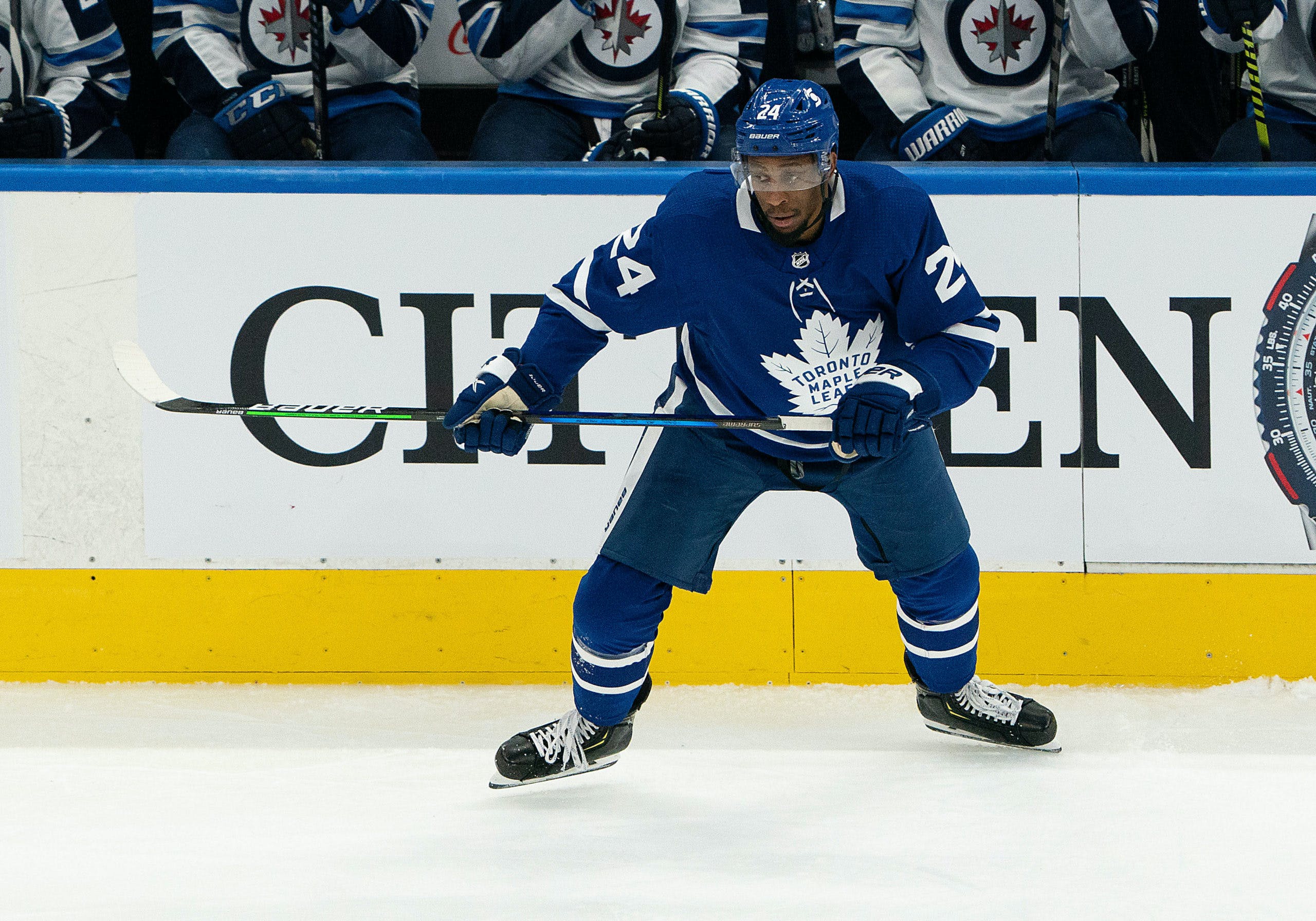 Photo credit: © Nick Turchiaro-USA TODAY Sports
By Michael Mazzei
1 year ago
Comments
In the wake of the Jimmy Vesey era coming to an abrupt end, today’s practice saw quite a lot happen and we may just see some changes to the lineup for this upcoming weekend.
First, it sounds like @Wayne Simmonds is nearly set to make his return:

Getting him back will be a huge boost to the Leafs lineup as they have surely missed his presence both on and off the ice. It also gives their power-play the net-front presence that was lacking in the six weeks he spent on the shelf. We don’t know for sure if Simmonds will be able to continue on his hot streak that had been put on pause by his injury, but he will no doubt bring new life to a team that desperately needs it right now.

In the same aforementioned tweet, Galchenyuk participated in practice wearing a blue jersey, which indicates he will make his debut in the top six. He played well with the Marlies and it has resulted in him gaining a lot of confidence that has been diminished since being moved around a lot.
Advertisement
Ad
Advertisement
Ad
Similar to how Vesey began the season playing alongside @John Tavares and @William Nylander, Sheldon Keefe is trying to help give Galchenyuk further confidence and provide his team with another useful weapon. How he does remains anyone’s guess, but he will no doubt bring his booming release with him.
Here is how the forward lines look as a result:

This looks like a pretty solid group overall, although it does come at the expense of the @Pierre Engvall who had found success in recent weeks playing with @Ilya Mikheyev and @Zach Hyman. It looks like Keefe is trying to see if @Alexander Kerfoot can find his rhythm as the centre where the jury is out on that decision. That being said, the fourth line as constructed should be a problem for teams to handle and is the perfect place for Simmonds to get back up to speed.
Advertisement
Ad
Advertisement
Ad
As for the defence, no changes have been made.

The Leafs’ goaltending situation has been hampered with injuries the last few weeks and it appears they have come out on the other side with Campbell participating in practice. Kyle Dubas mentioned yesterday that the team has not had much roster flexibility since Campbell was removed from LTIR and that was part of the reason why Vesey was put on waivers yesterday.
Although the latter getting claimed by the Vancouver Canucks took a hit to the Leafs’ forward depth, getting Campbell back is a monumental boost to the team. @Frederik Andersen has been struggling the last few games and has simply not been good enough, so getting a reliable option back that will provide him with some much-needed rest is important.

Forward Kenny Agostino and defenceman Calle Rosén have been reassigned to the @TorontoMarlies.

Advertisement
Ad
Advertisement
Ad
Meanwhile, the taxi squad saw some changes. In addition to Galchenyuk, @Timothy Liljegren and @Alexander Barabanov are also back with the Leafs.
Barabanov has been a revelation with the Marlies and should be a reliable option if needed. Liljegren is off to a strong start this season so, naturally, he got paired with @Martin Marincin at practice. @Kenny Agostino played briefly in one game against the Winnipeg Jets while @Calle Rosen has yet to make his season debut.
Given the recent rumblings about the Leafs potentially making a move or two, who knows if these changes will stick. Regardless, it should make for an intriguing new look for Friday night’s tilt against the Calgary Flames.