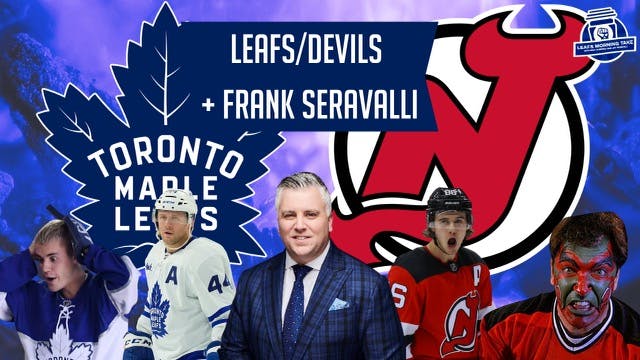 By Nick Alberga
13 days ago
Comments
For the second time in six days, the Leafs will take another crack at ending New Jersey’s massive winning streak tonight —this time in Newark.
The Devils have won 13 in a row, they haven’t lost since October 24th. Not to be outdone however, Toronto is 6-1-3 in November and they’re currently riding a modest five-game point streak (3-0-2). Sheldon Keefe’s squad has notched at least a point in 10 of their past 11 outings. They’re feeling good.
On today’s edition of Leafs Morning Take, Rosie & I discussed what it’s going to take for someone to finally beat the Devils. Decimated by injury, everyone on Toronto’s back end needs to step up —Ramus Sandin and Timothy Liljegren were at the forefront of that conversation. Also, Nick Robertson, who’s expected to return to the lineup tonight after being a health bomb for four straight games, was a topic of conversation. Talk about x-factors.
Advertisement
Ad
Advertisement
Ad
Additionally, we dove further into the Morgan Rielly injury story. On Tuesday, the 28-year-old was placed on LTIR, which means he’ll miss a minimum of 24 days and 10 games. If you’re keeping score at home, the Leafs are now without their three highest-paid blueliners. In fact, Toronto is expected to ice a d-corps tonight that makes a combined $7.1 million. Crazy, right?
So, is it time for Kyle Dubas to make a move? Hockey Insider and President of Hockey Content for Daily Faceoff, Frank Seravalli, dropped by to give us the latest scoop in Leaf Land.

Is a #LeafsForever trade imminent?👀@frank_seravalli dropped by today's edition of Leafs Morning Take to dish on that + much more.@Jay_D_Rosehill | @TLNdc

Could Toronto & New Jersey be primed for lots of offence tonight? @thegoldenmuzzy & @Jay_D_Rosehill think so.

💰🦃💰🦃💰@PointsBetCanada is live in Ontario!

We’ll be back with you on Thursday at 11 AM ET for a full recap of Leafs/Devils, plus we’ll take a look at the NHL standings at American Thanksgiving.
Don’t forget to subscribe, like, and leave us a review wherever you’re checking us out!